The man who will not read has no appreciable advantage over the man who cannot read. — Mark Twain

Recently, I read that the average cost of a four-year college education at a state university for an in-state student had risen to just shy of $40,000—and that was just for tuition and fees.  Throw in a dorm room and four years of a meal plan that would be rejected by starving third-world refugees, and you can easily hit $75,000 for a bachelor’s degree.

If a student goes to an out-of-state college, the costs can double, and four years at a private college can cost….well....I checked, and you can buy a fairly good used Learjet for what it would cost to give your child a degree in Art Appreciation from an Ivy League university.  (And the Learjet would actually be useful and probably would cost less to maintain than your educated, but unemployed, child).

While there are plenty of statistics that show how a college degree enhances future earning potential, there are alternatives to four years at a university looking for the wrong course taught by the wrong professor.  An autodidact is a self-taught individual--one who learns primarily by reading on his own.

There is a long list of self-educated men, but I’ll give you just one example: the recently departed Harlan Ellison.  After 18 months at Ohio State, Ellison was expelled for slugging a professor who had criticized his writing.  For the next forty years, Ellison sent the professor a copy of each of his published works.  (And seriously, if you have never read The Beast that Shouted Love at the Heart of the World, you can’t really call yourself educated, no matter how much your sheepskin cost.)

No less prominent an educator than Dr. Charles W. Eliot, the longest serving president of Harvard University, advocated for self-learning through reading.  For years, Dr. Eliot proclaimed in speeches that the average man could achieve the equivalent of a degree in liberal arts by reading fifteen minutes a day from books that would fit on a three-foot shelf.  According to Eliot, the purpose of a liberal education was to “enable a student to make intelligent choices,” something that could easily be done outside of the classroom.

Note.  Dr. Eliot also opposed collegiate sports, especially football, saying the game was
"a fight whose strategy and ethics are those of war", that violation of rules cannot be prevented, that "the weaker man is considered the legitimate prey of the stronger" and that "no sport is wholesome in which ungenerous or mean acts which easily escape detection contribute to victory.”  The only sports that Eliot endorsed were tennis and rowing.  He tried unsuccessfully to abolish Harvard’s football and baseball teams for years.

Eventually, a publisher, Collier’s and Sons, challenged the educator to compile a list of suitable books.  Though the actual published works by then occupied a little more shelf space, the set of books was a success, with Colliers selling over 350,000 sets in the first 20 years alone.

Harvard Classics (or as it was popularly known, Dr. Eliot’s Five-Foot Shelf) were published in fifty-one volumes covering varied topics from science to history, classical art to philosophy.  Eliot chose mostly completed works by selected authors, and almost everyone who reviewed the list felt that he had missed someone important.  (I am no exception:  while I applaud his selection of Twain’s Celebrated Jumping Frog, how could Eliot have left out Huck Finn?  Where is The Education of Henry Adams?  Or Grant’s memoir?).

A century later, the anthology has obvious flaws, it is woefully short in literature, totally missing modern science, and culturally centered only on Classical Europe.  None of this really matters, since as Eliot intended, the student who finished the anthology has not only learned to make intelligent choices, but has learned how to study and learn—far more important than the content of any missing volumes.

If you doubt the efficacy of what Eliot called a “portable university,” consider that as universities continually seek to cut expenses, they are turning to online education, which is essentially nothing more than solitary reading reinforced by some form of digital testing.  From my experience, the few students who really do learn from this delivery system (the natural autodidacts) could have done equally well armed with nothing more than a reading list. 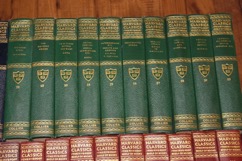 The anthology has been in continual publication for over a century, has spawned several competitors—including a set of 54 books selected by Yale—and was eagerly purchased on a complicated subscription basis by a public eager to display the tools of education, even if relatively few actually read them.

The books are still being sold, though the Collier’s publishing house is no longer with us.  Amazon will sell you a new set for about $700, Ebay will sell you a vintage edition for around $300, and Gutenberg Press will give you the digital version for free.

Several universities successfully use some form of the anthology for their curricula for a liberal arts degree, notably St. Johns College.  Alumnae of these universities have been very successful in gaining admittance in graduate schools, even medical schools, demonstrating recognition that, as Dr. Eliot had said, students who had studied the entire anthology had indeed learned how to make intelligent choices.

Since the books are so easy to acquire, I have a suggestion for any parents who are about ready to send their child off to some incredibly expensive college.  Buy a volume from the Harvard Classic anthology and give it to your child.  Pick any volume you want (though I would suggest Volume 29, Darwin’s Voyage of the Beagle).  Give it to your prospective university student with instructions to read it within two weeks.  After two weeks, test your child on the reading, (though doing this successfully may mean you will have to read the book, too).

If your child has a reasonable knowledge of the book from obviously having read it, by all means send your child off to college.  Education is a wonderful thing, and your child will most likely be the better for the experience.

On the other hand, if your student stopped reading before the end of the second chapter….well, save your money and start investigating whether the local community college teaches welding.  Sure, your child could still go to college and eventually get one of the many, many degrees that require no reading—education and criminal justice come to mind—but the degree will probably not lead to rewarding career.  In my twenty years of teaching at Enema U, it became painfully clear that far too many incoming freshmen had made it through the education system without ever being required to read a book after they had finished with those by Dr. Seuss in their pre-school years.

Perhaps your student just needs a gap year.  You can always wait a while and do the same test again.  But, if your child won’t read, Twain was right—your child is not appreciably better than a student who can’t read.