Plans to finance a college education are the political topic du jour, so every candidate has a plan to make it if not free, then at least cheaper.  Anyone who thinks more federal money will make college cheaper does not understand the nature of bloated bureaucratic institutions very well.  While I am not running for anything, allow me to relate how my college education was financed.

Frequently, I refer to myself as a “poor dumb ol’ country boy”—an act of self-deprecation designed to soften the blow from the next sentence, as it usually implies that whomever I’m talking to is a dumbass.  It is my own personal way of saying, “Bless your heart.”

Though I qualify for the sobriquet, the phrase—in comparison—more accurately described my father.   He left a hard scrabble West Texas farm to join the Civilian Conservation Corps in the Depression, then traded in one set of khakis for another when World War II started.

After the war, he returned to Texas, married the girl he met during training in Fort Worth, and raised a family.  In the post-war boom days, he decided to invest some money to provide the education for his boys that the events of the thirties and forties had denied him.  Being just a poor dumb ol’ country boy (the original Beta release), he didn’t have a very sophisticated investment strategy—he simply took a stock tip from somebody he worked with:  He bought a few bonds for my older brother and then, a couple of years later, he bought a few stocks for his new son, me.

I should probably point out that both my brother and I went to college without these funds.  We worked our way through college—properly motivated by a draft board that was eagerly waiting for us to fail.  I won’t compare the costs of going to college then versus now:  economic circumstances have changed to the point where such comparisons are meaningless.  I’m not sure that working your way through college without incurring huge loans is a viable option today, and if not, perhaps that is the problem that politicians should be trying to solve.

The early fifties were good years for the stock market.  After the crash of 1929, most ordinary Americans stayed away from the market—partly because of the Great Depression and partly because of the war—so it was a full twenty-five years before the Dow Jones rose back to where it had been in 1929.

The bull market of 1949-1955 has been largely forgotten by historians.  Though the market rose from roughly 160 points to just over 500 (yes, the Dow Jones today is above 26,000, but back then, it was only 160), this bull market is largely forgotten, mostly because it didn’t come to a crashing end: it more or less stagnated for about a decade, staying slightly ahead of the rate of inflation.

Since the markets didn’t suffer a fiery crash, no one wrote great essays about corporate greed or the growing disenchantment of the emerging middle class.  (Hint to future history students:  You can write about the ‘emerging middle class’ for any year after 1650.  And that bunch is always disenchanted.)

I was born in the middle of that boom, in the early 1950’s, when it seemed that anyone could make money in the market.  Consequently, everyone with a few bucks to spare, jumped in.  This is always a bad sign.

In the late 1920’s, Joseph Kennedy pulled out of the market after a shoe shine boy gave him a stock tip.  Kennedy figured that if people on the street were giving stock tips, it was time to pull out of the market.  In doing so, he saved enough of the family fortune that he could eventually finance his son’s run for the presidency.

"Taxi drivers told you what to buy. The shoeshine boy could give you a summary of the day's financial news as he worked with rag and polish. An old beggar who regularly patrolled the street in front of my office now gave me tips and, I suppose, spent the money I and others gave him in the market. My cook had a brokerage account and followed the ticker closely. Her paper profits were quickly blown away in the gale of 1929.” 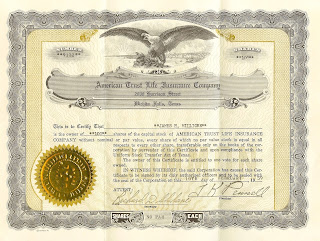 I am also positive you have never heard of the American Trust Life Insurance Company of Wichita Falls, Texas—even though it’s a really good name.  If you are starting an insurance company, you need a good name, something that inspires…well...trust.  Even a poor dumb ol’ country boy is unlikely to invest in a company calling itself, “Joe Bob’s Insurance and Tire Rotation Company”—even if it is based in the financial hub of Wichita Falls. (Want to know how to have a good weekend in Wichita Falls?  Leave on Thursday.)

Seventeen years later, I graduated from high school, on what can best be described as a “plea bargain”, with each of us glad to see the retreating back of the other.  After working several months in Mexico, I was ready to go to the University of Houston.  My father suggested I buy a typewriter, and then he handed me the two stock certificates he had purchased to finance my education.

I bought a used portable typewriter, and drove to Houston.  By noon, I had a cheap apartment and by dinner, I was a house dick (security guard) working the midnight shift at the Shamrock Hilton, where my main job was to guard the alley.   I don’t want to brag, but I guarded that alley so well that even now, long after the hotel’s demolition, my alley is still there.

Eventually, I found a stock broker and asked him about the value of my investment portfolio.  After a long search through record books, followed by several phone calls, he handed me back the stock certificates and told me he could find no record of either of the two companies in question.

Years later, I finally wrote a letter to the Texas State Insurance Commissioner, asking about the two insurance companies my father had invested in.  After a few weeks, I got a letter informing me that both companies had declared bankruptcy decades earlier.  One of the companies had evidently collapsed after the market dipped slightly (6.5%) following President Eisenhower’s heart attack of September 26, 1955.  That may not seem like much of a drop, but it was the largest one day decline in the market since 1929.

Neither of the stock certificates was worth the paper they were printed on.  Thankfully, I hadn't quit my day job in expectation of windfall profits, so the news didn't affect me much. (Well, I had a “night” job, anyway.)

My portfolio had been wiped out, but I still got an education—in several senses of the word.  (Perhaps a better education because I had to work for it).

And I am going to pass on this inheritance.  Now that I’ve written this blog, I’m going to mail the stock certificates to my sons.  Who knows?  Perhaps the American Trust Life Insurance will spring back to life.  My father also gave me $20 in Confederate paper money, and I think I’ll put that in the envelopes, too—effectively doubling their trust funds.