Pulque-It's Not Just for Breakfast

A long time ago, I wrote about tequila, its various forms, and my favorite place to drink it.  I always meant to come back and discuss pulque, but never got around to it.  For some reason, the recent elections have had me thinking a lot about drinking. 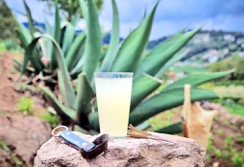 Pulque, like tequila, is made in Mexico from the maguey cactus, but whereas tequila is distilled, pulque is allowed to ferment naturally from the juice extracted from the agave plant.  It would be a gross oversimplification to say that tequila is distilled pulque, but--What the hell!--this is a blog, not a textbook.  (Though a few of these postings have actually been reprinted into textbooks by people who must have been unaware of my liquid-assisted research methods.)

While good tequila is made from only the Blue Agave plant, most varieties of the maguey, or agave, plant can be used to make pulque.  While it takes a dozen years for the plant to mature, a single plant can produce hundreds of gallons of pulque.

Pulque has always been associated with the lower classes--with campesinos, peasants, and the working poor.  The beverage was, until recent times, only made in small batches and was not available commercially outside of small local bars called pulquerías.  For a very long time, pulquerías were places which tourists (and even local women) avoided.

Tourists were warned NEVER to go near these bars, so I went into my first one when I was sixteen.  It was a tiny little place outside of Nuevo Laredo that didn't even open until after midnight.  I went after that place like a Baptist to a honky-tonk, convinced that any place I wasn't supposed to go was exactly where I needed to be.

Actually, I was treated kindly and with far more courtesy and respect than I deserved.  This has pretty much been my experience in Mexico for about half a century.  Even when my own government was predicting that any tourist who dared to cross the Rio Grande would immediately be carried off by flying monkeys, I have always felt safer in Mexico than I did while walking in the downtown areas of most large American cities.

Years ago, while attending school in Zacatecas, I was doing extracurricular research at the, ah...uh, ...library, when it closed at 3:00 AM.  It was just starting to rain, and my chances of locating a taxi were somewhere between slim and none.  As I walked home, I passed an all-night convenience store and the owner, seeing me, ran out and insisted that I borrow his umbrella.  We had never met previously, and he refused a proffered deposit, just asking that I return it the next day.  This is typical of the kindness I have routinely experienced in Mexico.

Finding the little pulquería in Nuevo Laredo was the most difficult part of the entire experience.  I finally found a cab driver who took me to the tiny little bar on the edge of town.  I eagerly ordered the drink I had heard so much about.  The bartender--traditionally called a jicareno--took what looked like a large green jelly glass and filled it with a pale white foamy liquid from a large earthen jug, covered in cheese cloth.

Pulque does not improve with close inspection.  While I have not personally seen anything moving in the cloudy liquid, it seems that I am the only Texan visiting a pulquería who hasn't.  Pulque is never exported to the states, in part because the beverage is not pasteurized and will quickly spoil.  (I have always wondered how they know when pulque goes bad?  Does it start to smell good?)

What does pulque taste like?  I haven't heard too many people agree on much.  Rarely does anyone say it tastes good.  You hear the word 'citrus' used a lot, but it definitely does not taste like fruit.  In my opinion (distinctly uneducated opinion), it tastes like a mixture of Tang--the old instant breakfast drink--with a dash of light machine oil.  It's tart, with just a hint of slime.

Pulque predates the Spanish by centuries, possibly millennia.  The early conquistadors discovered that the local population already had several forms of alcohol long before Columbus, and in the first centuries of conquest, they freely drank of the native brew.  It didn't take long for the Spanish to regulate pulque production and tax and tax and tax it.  It seems to be the overriding passion of all governments to tax anything enjoyable.  If Washington could figure out a way to regulate the sunrise, we'd all live in darkness until we had paid in advance.

According to one interpretation of the Aztec codices, pulque played a large part in the Spanish conquest.  The Aztec god Quetzalcoatl became drunk on pulque, and slept with his twin sister.  When he sobered up, he left Mexico, sailing to the east, vowing to return in the year One Reed.  In that year--what Europeans called 1519--Hernan Cortes arrived with his army.  Some believe that Moctezuma II, the Aztec ruler, mistook Cortes for Quetzalcoatl.

By the 1850's, several German brewers had set up business in Mexico and were turning out some of the same beer that is available today.  It was these breweries that helped bring an end to the era of pulque.  Not only was beer seen as superior, but healthier to drink.  And by the 1930's, at the insistence of the breweries, the Mexican government began to push the small pulquerías out of business.  In 1936, Mexico announced that no new pulqueías would be licensed.

The breweries were largely responsible for the dangerous reputation that pulque has today.  Among the lies spread by the distilleries was that animal or human feces were added to the cactus sap to start the fermentation process.  I am almost positive that this crap is bullshit.  Yeah, I'm pretty sure.

The few small bars that still manufactured the original brew got new regulations, and were forced to change their way of business.  Fifty years ago, women were not allowed to enter where the beverage was sold, but today the small bars must have bathroom facilities for both sexes.  Slowly, most of the old pulquerías have gone out of business, so there aren't that many of them left.

Pulque, however, is slowly becoming more popular.  A couple of companies are now using aluminum cans to sell a homogenized--and highly flavored--version of the ancient beverage.  The harsh taste is gone, and so is some of the fun of drinking it.  (If it tastes good, how can you still be sure it is bad for you?). Sold under several names, the new version of pulque is marketed as a "heritage drink".  (I doubt a similar sales strategy would work in the United States:  I don't think Madeira wine will sell better just because it's advertised as a favorite of our forefathers.)

If you want to try this new pulque-ish drink, I can recommend the Lincoln Bar in Ciudad Juarez.  They'll sell you a nice meal, several cans of neo-pulque cola, and you'll have an enjoyable evening.  But, if someone offers you a glass of the original pulque, you should not drink it.

No, you should never drink pulque.  Bring it to me, instead.  I'll dispose of it for you.