The local university campus was rocked today when several members of the History Department admitted to perpetrating a giant hoax on the academic community. Earlier this week it was discovered that several members of the department had invented a wild story involving an imaginary politician, Benjamin Harrison, supposedly President of the United States from 1889 to 1893.

“Oh, come on!” said Dr. Holland, a member of the department. “How could anyone take this crap seriously? It was just a joke that got out of hand; nobody in their right mind would believe a president in between the two terms of President Cleveland. Don’t you people read?”

According to grad student Brian Riley, the story of the fictitious presidency has made its way into several textbooks, including those used by many high schools in the nation. The university has promised to investigate the matter.

One member of the department, speaking off the record, tried to explain how the hoax began. “We were at the local brew club with some grad students. You understand, out here in the high desert, you can get thirsty. One thing led to another, and we started teasing the grad students trying to see how much nonsense we could get them to believe. We almost convinced them the South won the Civil War, but one student didn’t think that ending jived with his recollection of the movie Gone With the Wind. Then someone mentioned Ben Harrison and the whole story took on a life of its own.” 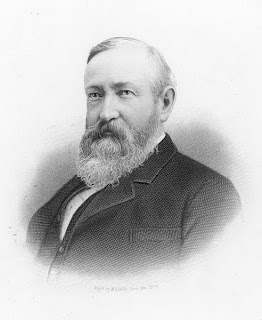 According to Dr. Holland, “We took a president that no one really remembered, Grover Cleveland, split his term in half and shoved this joker in between. It was just a local departmental joke until one of the students decided to post it on Wikipedia, then it seemed to just snowball throughout academia. People all over the world kept adding details, frequently something outlandish, such as being the grandson of a previous president! Like that could ever happen!”

When asked about the various photographs of the alleged president, Dr. Holland explained, “My daughter did that. She used Photoshop and just sort of made him up. She used Taft’s body and Grant’s head. I think the beard came from Santa Claus.”

When asked about the many textbooks already in circulation that include the fictitious presiden, Dr. Holland replied, “Don’t blame us, we didn’t do it. Those publishers were just copying material off of Wikipedia. As soon as Texas put it in a textbook, they all did it. God knows, those morons on Texas school boards will believe anything.”

While several professors admitted to being involved in the scandal, at least one privately confessed to having based an entire course on the fictitious president. “It was just so easy, no lectures to write, no research, just show up in class and talk nonsense. For two whole weeks I told the students about my drunken uncle Steve and the little bastards just sat there and took notes. Hilarious.”

Since this was homecoming weekend for the university, the timing of the scandals release was a bit problematic for the university administration, but they promised to investigate the incident fully. According to one official, while the administration is currently busy investigating how a million dollars of research money found its way into the athletic budget, the administration has promised to investigate the History Department as soon as possible.
Posted by Mark Milliorn at 12:01 AM