Is it just my university or is everyone going crazy over the H1N1 flu? All this while the Center for Disease Control tells us that this particular flu may not be as bad as the regular flu. So why are we close to a panic?

Isn’t it possible that people with mundane lives are desperately seeking some drama. It’s either that, are the world as we know it is half way down the storm drains of hell. I think some people would prefer a little catastrophic disaster than continue their boring lives.

So, the university has published disaster plans, flu advisories, H1N1 warning letters, and my personal favorite; an email that tells us to develop a three-deep roster in case key personnel become ill.

This is several impossible things. First, that a university strapped for cash would have three people capable of doing the same job. Second, if there were two people in the department that could do my job, I’d admit it. And probably most important, if this flu season turns out to be so bad that the first two people on the roster were sick, the third listed person would be willing to come to work.

If that many of the faculty are out sick, the remaining healthy ones will be hiding under their beds with a pair of panty hose over their heads in lieu of surgical masks.

Still I want to do my part.  I have two work study students; the Munchkins. One works in the lab in the morning, the other in the afternoon. Today, at lunch, while the two Munchkins overlapped, I called them into my office and explained our departmental health safety plan.

“If you think you might have any of the symptoms of the flu,” I said, “you still need to come to work. Just place a plastic bag over your head and secure it firmly around your neck with duct tape. Be sure the bag is clear, the university has told me several times they believe in transparency.”

Then, in case either of them actually got the flu, I gave them both a short list of the faculty office doorknobs I wanted them to spit on. No one can say that I am not prepared.

These plans won’t work and I know it. You probably cannot count on the average Munchkin to do her patriotic duty to prevent the flu from spreading. I’ll bet you anything they won’t wear a bag. I wonder how long they can hold their breath.


If there is a flu epidemic, the faculty are doomed. Each and every student, at least in my opinion, carries more germs than an open trench sewer in Belize. And they all sit there; mouths open, staring at their instructors. Each of those mouths is a virus cannon just waiting for a cough to fire their deadly salvo at the innocent instructor standing helplessly at the front of the room. We need body armor. 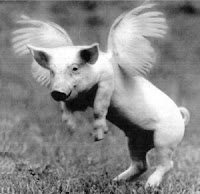 While I won’t get body armor, the university has plans to place large bottles of hand sanitizer at strategic locations. I am sure that someone, besides me, has already thought of sabotaging those bottles by adding a little super glue. That would almost make the entire epidemic worth while.

And you can count on me to believe this nonsense just as soon as pigs fly. Or in this case, swine flew.
Posted by Mark Milliorn at 12:01 AM