Someone I trust has reliably informed me that a dead man cannot sue for libel.  Harry has just recently passed away, so I guess I’m free to tell the story.

There used to be a grand old Texas landmark:  Peden Iron and Steel of Houston, Texas.  Peden sold everything—or at least everything useful.  The name hints about the massive steelyards and fabrication shops.  Peden sold structural steel such as H-beams, channel iron, angle iron, and steel plating.  It also sold mechanical tubing, copper plate, and drill stem pipe.  I can remember walking through a valve so tall I could not reach up and touch the opposite wall of the valve.  Peden sold this steel to companies all over the world, and bought steel products from mills all over the United States. 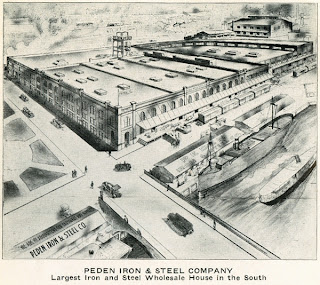 But that was only part of what Peden sold.  The multiple enormous warehouses of the wholesaler stocked everything from lion repellent to guns, kitchen utensils to blue jeans, and from baseballs to nails.  If a hardware store or a department store anywhere in Texas had it for sale, it came from the warehouses of Peden.  Peden could sell you all the material needed to construct a house, supply the tools to build it, and then fill it with everything you needed to live in it.  Peden had been doing this since 1905.  The drawing at right dates to 1924, by the time I worked there, Peden had grown much larger.

Among all my other jobs during college, I sold structural steel at Peden.  It was a great place to work, if for no other reason than employees could buy anything Peden sold at wholesale less 10%.  It they had sold food, it would have been the only place I would have shopped.  (I remember buying my wife—The Doc—a Christmas present: a Remington Nylon 66 .22 rifle.  I paid $36 for it, and it still shoots wonderfully.)

Selling steel was a great education for an engineering student.  I had to learn the difference between steel grades and got to talk to a lot of working engineers and architects.  I could go down in the yards and watch the steel being fabricated, as well as talk to mills about future production runs.  Eventually, I worked up a clientele that called me regularly to negotiate purchases.

One afternoon, I got a call from Brown and Root looking for bridge beams.  They needed huge beams in an unusual length.  There weren’t a dozen places in the world that would have such big beams, but Peden had them in stock.  What they finally picked were 6 beams, 36”x 652# at 60’ for $18.97 CWT.  For those of you who have never sold steel for a living, I’ll translate.  They wanted 6 beams, 60 feet long, each 36” wide, and weighing 652 pounds per foot.  CWT means hundred weight, so the beams cost slightly less than nineteen cents a pound--a fairly stiff price since steel normally sold for about fourteen cents a pound.  I negotiated the higher price because (a) they were desperate and (b) they needed them delivered the next day.  As Brown and Root knew only too well, in chaos there is profit.  (After all, Brown and Root was a subsidiary of Halliburton.)

Peden was one of the few steel service centers that had a fleet of trucks large enough to handle such an oversized load.  Each one of those beams weighed twenty tons and would require its own individual truck.  In total, this was almost a quarter million pounds of steel.  Even Brown and Root didn’t have the ability to move those beams to the construction site.

There was only one small problem in completing the order.  By the time the negotiations were over, it was 4:15 in the afternoon.  About six months earlier, Peden had been purchased by a new owner.  Harry Surrenderstein (a fine old family name that comes from a region of France located close to the German border) had recently sold the chain of department stores that his family had run for 40 years.  With the profits, he had purchased Peden Iron and Steel.  Since his family had sold shirts—I guess he was a self-taught expert on selling steel.

Harry came up with a lot of silly changes, and one of the more obnoxious (in his case ox-noxious) changes was that he had to personally approve any next-day delivery written up after 4:00.  I wrote up the order, and took it to Harry for approval.

“Yes, sir,” I said.  “And it is for material we really want to move and it is for one of our best customers.”

I handed him the order slip, which below the billing and delivery information simply said:

Harry looked at the order for a few seconds and said, “I thought you said it was a big order.  There are only 6 of them for $19 each.”

There are lots of reasons given for why Peden went out of business about a year later.  Most of the reasons talk about cash flow, financing, or foreign imports.  If you ask me, I think it was because the president of one of the largest steel service centers in the world ran the place for over six months before he learned from a 20 year old employee that steel was sold by the pound.