Everyone Comes to Rick's

It is not the best movie ever made, but it is certainly one of the best.  And it is one of those movies that can be watched over and over again...a cinematic best friend.

Casablanca is a movie that everyone "knows", but as fascinating as the movie is, the camera never recorded the more interesting stories that happened behind the scenes or just off the set.  And like many movies, it spawned its fair share of myths.  For example, it is commonly believed that Ronald Reagan and Ann Sheridan were almost cast as the leads.  While that makes a nice story, it is the lingering effect of a deliberate hoax by Warner Brothers, who routinely make such bogus announcements about up and coming "B" actors in their stable to boost their popularity. 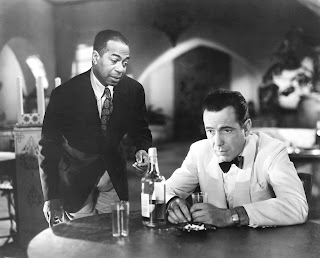 There were, however, some real casting issues.  For example, the part of Sam--the singing piano player at the center of most of the film--was almost given to Ella Fitzgerald or Lena Horne.  Only at the last minute was Dooley Wilson (the only member of the cast to have actually visited Casablanca) given the part—despite the fact that he cannot play the piano.  (If you carefully re-watch the movie, the movement of Wilson's fingers on the piano keys makes absolutely no sense.)

It seems impossible to imagine the movie without Ingrid Bergman, but a still readable memo from the Epstein Brothers, who shared an Oscar for best screenplay, says that the part should either be given to "a European girl or an American girl with big tits."  (Evidently, the part called for either a great accent or a great chest).

That the movie was even made is something of a fluke.  The script did not fall into any of the accepted genres of movies that Hollywood was making at the time...And, it still doesn't fit the mold.  In 1982, a journalist and aspiring scriptwriter, Chuck Ross, sent around a freshly typed copy of the script under the original tittle,  Everyone Comes to Rick's.  Of the 217 agencies who received a copy, only 41 recognized the story or believed it was too similar to the movie.  Fewer than a dozen showed any tentative interest and the majority refused the script that in 2006, was chosen by the Writer's Guild of America as the best screenplay of all time.

One rejection letter even suggested that the author would profit from reading Screenplay, by Syd Field.  The book is an excellent textbook on how to write a screenplay.  Should you read it, you will especially enjoy the chapters that use Casablanca as an example.

The movie was fortuitously timed:  the script hit the desk of Warner Brothers the day after the attack on Pearl Harbor.  Had it arrived a week earlier, it might have been rejected simply because Hollywood was under pressure from Washington not to produce any movie that might prejudice Americans against the policy of neutrality.  In addition, when the movie was released, American forces had just landed in North Africa—a bit of serendipity that Hollywood publicists exploited in their advertisements..

It is easy to dismiss the movie as just another jingoistic Hollywood product of a war time assembly line the tailored to the needs of the Office of Wartime Information, as much a part of the strategic mobilization as the .45 pistols manufactured by the Singer Sewing Machine Company.  The movie is, however, much, much more.  In reality, the film is about the idea that when people lose faith in their ideals, they are beaten before they start to fight.  The story is about how Rick (and eventually, even Captain Louis Renault) rediscover the ideals worth believing in, whether they win or not.

The second theme of the movie—and perhaps why I have been thinking about it so much lately—is the plight of refugees.  Not only are the refugees gathering in Casablanca awaiting safe passage away from the Nazi menace, but the set of Casablanca was also full of emigres.  All but three of the cast were immigrants.  Even the director, Michael Curtiz, had fled Europe.

One group of actors in particular had only recently been forced to leave Europe by the Germans.  All of the “Nazi soldiers” were German Jews who had only recently arrived in the U.S.  Conrad Veidt, who played Major Strasser, had fled Germany because his wife was Jewish.

Warner Brothers would later boast that the cast of the movie represented 34 different countries—a fact that is easily demonstrated by watching the movie.  In the first few minutes of the film, you can hear snatches of dialog in at least a dozen different languages.  In the scene in which the bar patrons sing La Marseillaise, the tears on the faces of the actors--and often of the audience--are real.  During production, filming was frequently halted by the weeping of overcome refugee-actors.

Language barriers were frequently a problem, despite the number of bilingual people present.  It was also occasionally a problem for anyone to understand the director, Michael Curtiz, who once ordered a group of extras to  "Separate together in a bunch."

Another time, Curtiz told one of the prop men to put a poodle on one of the bar tables.  It took quite a while for the man to locate one, but he finally deposited the dog on the table.  Curtiz roared at the man, "Not a poodle, a poodle of water!"

S. Z. Sakall, who played the lovable waiter Carl, said, “Those who tell tales here in America about Mike's English should have heard him speak German."  Sakall, himself an Austrian who had only narrowly escaped Germany in 1939, lost all three of his sisters, who perished in concentration camps.  (I highly recommend reading his difficult to obtain memoir, My Life Under the Emperor Francis Joseph, Adolf Hitler, and the Warner Brothers.)

English was far from the first language of the actors:  German was far more common among the cast.  Quite a few of the actors were forced learn their lines phonetically.  Even Ingrid Bergman played poker between takes in an effort to improve her English.  (Bogart whiled away the time playing chess, his favorite game.  The first glimpse of Bogart in the film is of him playing a game of chess in the bar, an actual game he was playing with a friend.)

The movie enjoyed a strange afterlife, too.  In America, by 1970, it had become the most frequently replayed movie on American television, and one of the movies most frequently shown in film festivals.

For years, the version released in Europe was so heavily edited that Americans would not be able to recognize it.  Almost a half hour shorter, Victor Lazlo is transformed from being a member of the Czech underground to being a Norwegian nuclear scientist.  Any scene that would upset Germans--such as the singing of the Marseillaise or the death of the Major Strasser--was cut from the movie.  The war had been over for more than thirty years before an uncut version was finally released in West Germany.

In Hungary, the movie became an annual Christmas tradition, shown on the country's single television channel each year for decades.  In France, a French dubbed version is nearly always available at a cinema somewhere in the country.

You can find a Rick's Bar just about anywhere you look.  There is one in almost every state, as well as in London, in Paris, and of course, in Casablanca.  I've also drunk a beer in one in Guatemala, though I was probably the only patron in the establishment at the time who knew the significance of the name.

Earlier today, as I rewatched the movie, I couldn't help but to wonder how the movie stays so popular while the country grows increasingly anti-immigrant.  If we no longer welcome the refugee, what is in the movie worth watching?  As I write this at Thanksgiving, I wonder:  If we stop being a nation of pilgrims, who are we?
Posted by Mark Milliorn at 9:30 PM 1 comment:

The Greatest Art Museum that Never Was