While reading this week, I ran across a strange foreign military rank, one that I had never heard of before.  The British Army has a pioneer sergeant, a peculiar rank that has existed for almost four centuries.

British infantry companies have a single pioneer sergeant, traditionally the biggest soldier in the company.  Besides his size, the sergeant is easy to recognize because even on parade, he wears a large leather apron, carries a double-bladed ax, and is the only man in the unit to sport a full beard.  (As I wrote that, I began to wonder how long it will be before we read of the first female pioneer sergeant in the British Army and I wondered if she will have to wear a fake beard.)

Traditionally, the pioneer sergeant’s job was to be the lead soldier in the field, helping to clear the trail.  He also served as the unit’s blacksmith, where the beard was necessary to protect his face from the sparks given off by the forge.  His weirdest duty was to cut the legs off dead horses—every Army horse has a serial number branded onto the hoof, and by presenting the severed leg, a soldier could prove he hadn’t sold his mount.

Naturally, this got me to thinking about other weird ranks.

Medieval armies had a lot of strange and obscure ranks.  In the English army, a vintener was a leader of 19 archers, a centenar led 100 archers, and a millenar led a thousand archers.  A gros valet, despite the name, was a servant valued enough to be given armor.  Most of the common military ranks used today—sergeant, lieutenant, captain, major, and colonel—all have their roots in French medieval military ranks.  Lieutenant, for example, meant “place holder”, the man who stood next to and assisted his lord (usually a captain).

If you have ever wondered why a major outranks a lieutenant, while a lieutenant general outranks a major general, the confusion dates back to the time of armored knights.  Originally, the latter was a sergeant major general, but over time, the word sergeant was dropped from the name.  While the rank is not used in the U.S. Army, many armies around the world still use the rank of captain general, a rank just above lieutenant general.

As military technology changes, so do military ranks.  During WWI, an airman in the RAF could achieve the rank of Lance Bombardier.  The French—and you just knew I was going to work them into this—still have a regiment of Airborne Marine Infantry.  I’m not going to check on this, but I bet they ride horses in submarines.

A honorable mention has to go to the Finnish Air Force, which still has the rank of lentokoneapumekaanikkoaliupseerioppilas, a non-commissioned officer trainee assistant airplane mechanic.  It probably takes longer to learn to spell the rank than it does to work on the airplane.

There are lots of military ranks that result from political nonsense.  Texas actually has a navy consisting of a few ferry boats and several floating vessels that were used in various wars and are now in museums.  By tradition, the governor hands certificates awarding the honorary rank of Texas Admiral to anyone who does him a favor—including one to a writer of a certain nonsensical blog.  Far rarer, the governor of Nebraska—a triple landlocked state—regularly appoints individuals as Honorary Admirals of the Nebraska Navy. 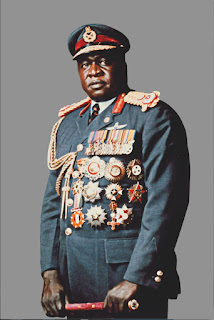 Monarchies and Dictators get to hand out great titles (with handsome sashes and badges to match).  In the British Army, there was The Most Honourable 1st Marquess of Kedleston, Viceroy of India George Nathaniel Curzon, Knight of the Garter, Order of the Star of India, Order of the Indian Empire, Her Majesty's Most Honourable Privy Council.  Not bad, but it pales in comparison with His Excellency, President for Life, Field Marshal Al Hadji Doctor Idi Amin Dada, VC, DSO, MC, Lord of All the Beasts of the Earth and Fishes of the Seas and Conqueror of the British Empire in Africa in General and Uganda in Particular.

Idi Amin was actually being modest, for he also claimed to be the King of Scotland.  When he wasn’t busy with his official duties—primarily murdering his citizens on a whim—he personally trained admirals to serve in the Ugandan Navy.  Since Uganda is land-locked and has no navy, I will leave it your imagination as to what was involved in the training.

The most interesting rank has to be the Israeli Aluf.  Generally translated as general, the rank of Aluf historically, is a little rare.  Originally meaning the man who commanded a thousand men, today the rank is the equivalent of a major general.

In early times, the last man to hold the rank was Judas Maccabeus, who led the Israeli revolt against the remains of the empire founded by Alexander the Great.  Today, the holiday of Hanukkah is celebrated in remembrance of his restoration of the Israeli temples.  That was over 2,100 years ago.

After more than two millennia, there was a new aluf—Mickey Marcus, an American Colonel, who was appointed the commander of the Jewish front during the 1948 Arab-Israeli War.  Though Israel won the war, ironically in the closing days of battle, Marcus was killed by an Israeli sentry when the general did not answer the sentry’s challenge.  Unfortunately, the private who challenged Marcus spoke no English and Aluf Marcus could not understand Hebrew.
Posted by Mark Milliorn at 12:01 AM 1 comment: Links to this post

Nothing the Taxpayers Pay For Is Free