Thirty years ago, my father had a cherished belief in the efficacy of peppermint candy to cure a long list of ailments.  Heartburn, stomach aches, shortness of breath—you name it—a penny candy was the cure.  Of course, my father was just a poor dumb ol' country boy who left West Texas by way of the CCC and World War II.

Even after he had a triple bypass in his fifties, he still believed in those little peppermints, saying, "while they couldn't hurt they might help."  There were several on his nightstand the night he suffered his fatal heart attack at age 70.

Now, for the last couple of weeks, his overly edjumacated son has had his own problem with heartburn.  For those of you who are familiar my diet, this probably comes as no surprise, and more than a few of my friends will find it hilarious.  Yes, I occasionally indulge in some "spicy" foods.  Yes, I use Tabasco Sauce as a salad dressing and just recently learned that paprika was more than a colorful garnish designed to make deviled eggs look good.

I would feel this weird pressure on the middle of my chest, but as soon as I ate one of those chewable antacids, the heartburn would miraculously lift.  I got better immediately.  I started carrying a few in my pocket and I kept a bag on my nightstand.  If this sounds familiar, I should point out that mine were flavored strawberry, not peppermint.

Which brings us to July 13 of this year.  New Mexico gets a lot of its tax money from the sale of oil and gas from public lands, and the receipts from this are dramatically down.  We also have a small problem with declining numbers of students graduating from high school.  Somehow, this came as a surprise to the university, which kept expanding programs, erecting new buildings and allowing administrators to multiply and consume resources like grain house rats.  Raises stagnated, enrollment dropped, standards fell, but somehow, we managed to pour millions and millions into a bloated athletic program.  The university was safe because the administration could count on the Board of Regents' annually voting in a tuition raise.

Until the Board of Regents didn't,  Suddenly, the university was facing millions in budget cuts, and the powers that be quickly decided that none of the cuts would come from Athletics.  Well, they did cut the Equestrian Team—despite having just built them a new indoor arena.  This will seem odd to most people who probably believe that riding horses is an outdoor event.  (I seem to remember a King of France and his son, who rode horses inside the Louvre:  perhaps this is the role model for our administration,)

During the televised announcement of the budget cuts, while I and most of the faculty and staff on campus were watching with dread, some very large woman wearing stilettos stood on my chest.  I began sweating profusely (and not just because the university had already begun cutting the air conditioning to my windowless office).  I scooped up those antacids and began chomping away.

But, there was no relief.  Somewhere about the seventh antacid, I began to realize I was in real trouble.  For some reason, I was confused, and I could feel my IQ dropping.  I wandered out in the hall, carefully locking my office door behind me and made my way outside into a scorching New Mexico heat.  I knew where I was going:  just across the street was the Health Center, where both students and employees could go for medical treatment and referral to specialists.  These people had been acting as my primary care physicians for years, and I liked and trusted them.

A lot of what happened then is now a little fuzzy, but I remember standing in the middle of a street for a while wondering if I shouldn't just get in my pickup and drive home to my wife, The Doc. Finally, I made it to the door of the clinic and discovered it was closed for an hour, while the clinic held its employee meeting.  The staff inside was learning, to their horror, that the university was closing the employee side of the clinic and might farm the student half of the operation out to some commercial Doc-in-the-Box company who would run the place for profit.

One of the nurses in the clinic saw me standing out in the heat and came over to the door to tell me the clinic was closed for an hour.  I have this sneaky feeling I looked like a homeless schizophrenic wandering around looking for food.

I remember thinking how it would be so much easier to just sit on the porch and wait rather than trying to recross that street, but before I sat down, I turned to the young woman and spoke through the glass door.

And that was all it took.  The people in that clinic saved my life.  Lots of people moved quickly, and I have a little trouble remembering everything.  My blood pressure was off the wall, they gave me oxygen, they put me on a gurney, they started an IV, they called an ambulance, and they put a tiny little nitroglycerin tablet under my tongue.

Nitroglycerin is the best drug in the world!  To my ignorant medical mind, I think we should all be carrying it.  It is WAY better than candy for a heart attack!  Within seconds of that nitro tablet dissolving under my tongue, the evil woman wearing a stiletto stepped off my chest. 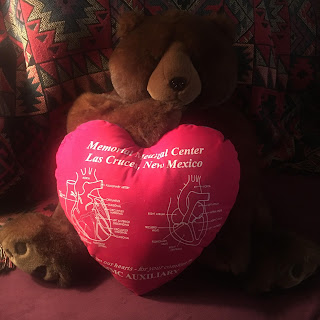 Yes, I had a heart attack, and within 24 hours, I also had a quintuple coronary bypass.   The prognosis is excellent, and I should eventually recover and return to work.  But, when I do, the employee health clinic will no longer be there.  The people who stopped listening to the news of their being laid off long enough to save my life, might very well be gone.

Even while I could barely think, I knew I could trust those people:  I knew they were my only hope.  I knew the doctors and nurses to be an invaluable asset the university should be proud of.  Their loss, if the move continues, would be a deep tragedy.

I have been writing this weekly blog for a little over seven years, and in that time, I have pretty much allowed the readership to grow—or not—on its own.  Today, the nonsense I write each week is read worldwide by between 45,000 to 60,000 people, depending on what I write about.  This week, do me a favor:  Mail this to someone...or even a couple of someones.  Complain a little bit, and suggest that the university reconsider shutting down such a valuable resource.  The Employee Health Clinic has already saved my life.  Maybe the next time they help someone, it will be someone useful.  You know...like a coach?

The university can find the money and it can reverse this decision.  After all, while I was in the Cardiac Care Unit of the local hospital, the administration decided to keep the Equestrian Team.