Most stories about the West are completely over dramatized to make them more interesting, but there are a few stories so gruesome and barbaric, that just the opposite happens.  Such is the case with Black Jack Ketchum.

First off, his real name was Tom Ketchum.  Someone said he looked like a notorious Texas outlaw by the name of Black Jack Christian, and Tom just kept the nickname.  If you have seen the movie, The Princess Bride, then you will understand when I tell you that Tom Ketchum was becoming the "Dread Pirate Roberts".  There is a certain advantage to starting your career in crime with a built-in reputation attached to a different name.  When Doroteo  Arango began his life of crime, he took the name of an established local bandit and became famous around the world as "Pancho Villa". 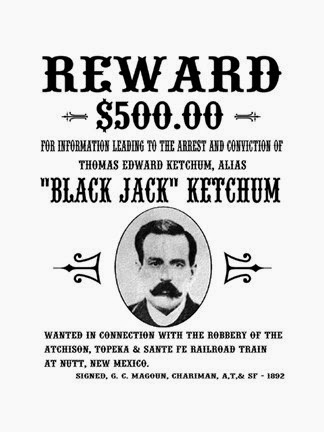 Black Jack and his brother Sam robbed trains in Texas and New Mexico.  In the movies, train robbers always chase the train on horseback, leap to the moving train, then stop the train miles down the track.  After stealing all the money, somehow, their horses are always waiting alongside the track, showing no evidence of being exhausted after a several mile chase.  If trains had actually been robbed this way, the railroads could have protected themselves by stationing the conductor on the back of the caboose with a bucket of rocks.  Any outlaw on the back of a galloping horse would have been more likely to shoot his own horse than the train.

Black Jack was no fool, so he stationed his horses along the track, then backtracked to the closest watering station.  Those steam locomotives had to stop every 25 miles to take on water.  Ketchum and his men would sneak onto the train while it took on water, then once the train started up again, would climb over the tender and force the engineer to stop the train near their horses.

On more than one occasion, Black Jack and his crew forced the engineer to uncouple the cars behind the express car, then moved the train far enough forward so that passengers could not interfere while they dynamited the safe.

The Ketchum brothers always seemed to have a little trouble with dynamite.  On average, it took them about three tries to blow a safe open.  In one case, they probably decided to finally get the job done on the first try, so when the impressive pile of dynamite sticks exploded, it blew the express safe through the roof of the car and scattered the contents.  By the time the posse showed up, the robbers had made off with an estimated $50,000, and $10 bills were blowing in the wind around the wreckage of the train.

Not all the robberies were so successful.  Once, the gang hit a post office and was rewarded with only $9 while a rail station robbery yielded a measly $2 and a Winchester.  And even when the gang was successful—the train robberies would eventually net a career total of over $100,000--they usually spent most of the money quickly by bribing local officials not to reveal their location to federal marshals and railroad detectives.

The two brothers had an active career: they robbed trains, stores, post offices, and rail stations.  They worked together, rode briefly with the Wild Bunch, broke away and formed their own gang, but eventually quarreled and split up.   Sam Ketchum was eventually shot while robbing a train, and left behind by his men.  Captured, he died of gangrene on July 28, 1899.

Thomas “Black Jack” Ketchum wandered over to Arizona, where he murdered two men.  Not knowing that his brother was dead, Ketchum decided to return to New Mexico and rejoin the old gang.  When he couldn’t locate his brother and he was running short of funds, he attempted to rob a train single-handed.

Black Jack tied his horse to brush along the track, then hiked six miles back to the nearest watering station outside of Folsom, New Mexico.  He forced the engineer to stop the train at gunpoint, just two miles from the waiting horse.  However, it was here that the robber’s plan fell apart.  The conductor, Frank Harrington, had been unarmed when Sam Ketchum had robbed his train in July, 1899, but now he carried a shotgun.

While Black Jack was forcing the engineer to uncouple the passenger cars, Harrington leaned out of the doorway of the passenger car and fired his shotgun.  The blast ripped open Ketchum’s right arm.  Ketchum ran off into the darkness, eventually reaching his horse, but he was too weak from loss of blood to mount up and escape.  As he began to lose consciousness, he lay down by the tracks and fell asleep.

The posse had no trouble capturing him. Subsequently, he was taken back to town, tried, and sentenced to ten years for assaulting a U.S. mail agent.  While awaiting a second trial, his arm became gangrenous and was amputated.

At his second trial, Ketchum was found guilty of felonious assault on a train.  At that time in New Mexico territory, this was a capital offense.  Ketchum was the first—and last—outlaw sentence to hang for "assaulting a train".

Unfortunately, Ketchum’s execution was not handled well.  It should have been: by the turn of the century, hanging had evolved into a science.  Largely due to the efforts of William Marwood, in London, there was a well-established method for executing a man by hanging.

First, the man was carefully weighed.  Marwood had established the “Official Table of Drops” that set the distance a man should fall before the rope snapped taut and the man’s neck broke.  This table is still in use in those areas of the world where hanging is still the means of execution.  Ketchum weighed about 175 pounds, so he needed to fall 8’6”.

A new thick rope was procured and carefully stretched with the same weight as the prisoner for 12 hours.  This would remove any ‘give’ in the rope at the time of the execution.  Then a hangman’s knot was tied with 13 coils in the knot.  (According to legend, when black men were lynched in the south, the knot would have only twelve coils.  Even in death, the poor man would be denied equality with a white man.)  Finally, the coils of the rope were soaped to ensure that the knot would slide smoothly.

Unfortunately, New Mexico officials made two mistakes.  First, the only rope available in Clayton, New Mexico was a little thinner than the usual hanging rope.  Second, Ketchum had nothing to do while he sat in jail awaiting his trial and execution, so he ate—a lot.  His weight ballooned to over 200 pounds by his execution date, making the rope 8 to 10 inches too long.

The town tried to do right by Ketchum.  The night before his execution, he was asked if he wanted anything special to eat.  Ketchum turned down that offer, but asked instead for some female companionship for the night.  This request was denied as “the town treasury was insufficient to hire a lady of the town.”

The next morning, he ate a large breakfast, dressed in the new suit the town had given him, listened to some violin music, and finally promised all who had been involved in his prosecution that they were marked for death by his (non-existent) gang. 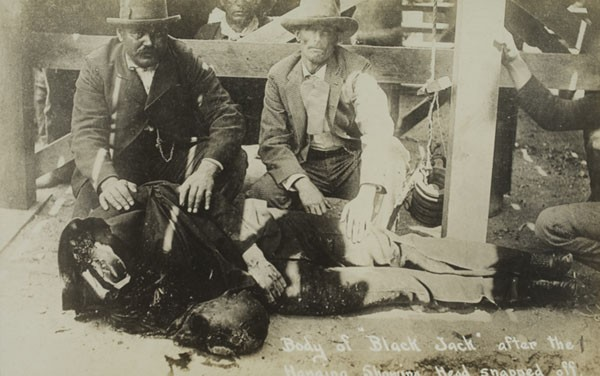 At a little after 1:15 p.m. on April 26, 1901, the trap door under Black Jack Ketchum’s feet opened, dropping the man to his death.  He fell too far, too fast, and the rope was too thin--causing the rope to cut his head completely off his body.

A few years later, the U.S. Supreme Court looked into the matter and decided that this act was unconstitutional.  (Not the hanging—that was fine, despite its "complication".  In fact, the last man to be hanged in America was Billy Bailey in 1996.)  No, the crime of "felonious assault on a train" was found to be unconstitutional.

Black Jack Ketchum was the only man ever "hanged" in the West for a crime other than murder.
Posted by Mark Milliorn at 12:01 AM