The university, experiencing severe budget shortages, has started offering senior faculty a form of “Get Out of Jail Free” cards in the form of retirement buyouts. Recognizing the true worth of senior faculty possessing decades of teaching experience and advanced research, the university has offered many of the aging baby boomers incentives to retire early. Most of the incentive is in the form of glass beads and shiny trinkets. Naturally, many of the faculty are accepting the offer.

Strange, I always thought it would be the students who would run off the baby boomers first. I can just picture a student, exasperated about hearing about Woodstock, the sexual revolution, and The Summer of Love finally snapping. “Mention the Beatles one more time, Grandpa, and I’ll give your Depends a wedgie!”

It would be easy to imagine the state, pushed by rising retirement and Medicaid costs, legalizing the hunting down of senior citizens. A new sport, with a limited season. You could shoot two a season, but it would probably be illegal to hunt within 500 yards of a cafeteria or a pharmacy. I expected this, so I was a little surprised when it was the administration that decided to thin the herd. 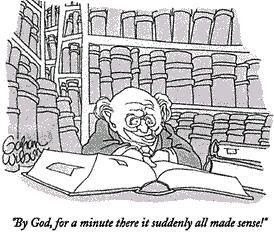 Senior faculty, highly prized for their wisdom and experience, received letters marked “Voluntary Final Exit” and were told that those that accepted the early retirement would be honored with a “separation party” hosted by the university. Not surprisingly, many of my colleagues accepted the offer.

I just came from the separation party, and it was a grand affair, held in one of the largest ballrooms in the student center. Real cloth napkins!  The very best plastic forks.  Well, the food wasn’t that great, since it came from the student cafeteria, but the speeches were good. One after another, the members of the senior administration stood at a podium decorated with the university motto- Veni, Vidi, Velcro (I came, I saw, I stuck around) and told the audience of the great things the retiring faculty had accomplished when they were younger and cheaper. And the administration promised to eventually replace the retiring faculty, though not necessarily in the same department, the same field, or anytime soon. It was generally understood that while academics would remain a top priority, the immediate need of the university was to complete the new high rise sports chalet at the North end of the football field.

Several students attended the farewell ceremony, mostly for the free food, but a few spoke meaningfully about how they had always enjoyed sleeping through a particular professor’s class or how they had never realized how important their major was until they had changed it to a field in which there was absolutely no chance of actually gaining employment. It was a deeply moving experience.

Then one by one, those retiring professors accepting Early Retirement And Separation of Employment (ERASE) got up and made a few brief remarks about their years at the university. Though none could remember a year when the football team was actually victorious, several elderly professors claimed to remember when the library subscribed to major journals, a parking permit cost $5, and freshmen could actually read. No one believed these stories, but they were entertaining.

Finally, at the end of the ceremony, the retirees, smiling and waving, were led out a rear door as the band played “The Baby Elephant Walk.” Everyone in the hall was deeply moved.

There was one strange moment: after the last retiree had disappeared, you could hear the muffled shuffling of feet. Then Dr. Grumbles, the German professor, suddenly reappeared at the doorway. As helping hands assisted him in exiting again, he yelled something unintelligible. I’m not sure, but I think it was, “Soylent Green is made of Professors!”
Posted by Mark Milliorn at 12:01 AM