My wife, the Doc, and I recently went to see the new Bruce Willis movie, RED. The movie has an incredible cast that includes Helen Mirren, John Malkovich, Morgan Freeman, and Richard Dreyfuss. It’s hard to make a bad movie with a cast like that. They succeeded, but it must have been hard.

Mind you, on at least one level, I enjoyed the movie; but there is no denying that the plot was weak, the actors appeared to be embarrassed with the dialogue, and the conclusion was obvious. The movie has very few moments without an explosion, a car chase, or someone firing a gun. Last time I checked, I was still male, so I enjoyed the movie. Enjoying movie violence is probably hardwired into the Y chromosome. Personally, I think the perfect movie would be a remake of The Longest Day with an all nude female cast. The paratrooper scenes alone would be worth the price of admission. If the director could figure out some way to add a chase scene using tanks, the movie would be Oscar material!

I think America needs a new law, perhaps a new constitutional amendment; call it the Schwarzenegger Rule. Whenever 50 or more bullets are fired at anyone in a movie, the character must die. Immediately. If this rule had been used in RED, the movie would have lasted about 5 minutes. Less if you don’t count the credits. 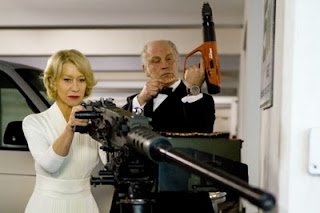 Why do the movies show us such nonsensical use of guns? Remember the original 1977 Star Wars? I sat through most of that movie thinking that the entire Imperial army could have been annihilated by a twelve year old girl with fifteen minutes of instruction on a break open single-shot squirrel gun. What was the use of rapid firing ray guns that never hit anything? The Rebels didn’t need the force, they needed target practice.
I have some advice for Hollywood. These are just a few simple suggestions about firearms that you would think that anyone short of livestock would know. Since scripts in Hollywood are evidently written by Moose and Squirrel, let me help you.

1. People do not fly through the air when they are shot. Even if the gun is a shotgun, people do not fly backwards 10 feet. Remember Newton’s Third Law of Motion? For every action there is always an equal and opposite reaction. If the person being shot is thrown up against a wall, so would the person doing the shooting. So unless the gun is a 12 inch Napoleon cannon from the Civil War…

2. Quit putting silencers on revolvers. You can put a silencer on an automatic, but never, never, never on a revolver. The gap between the cylinder and the barrel will let the gas, and thus the sound, escape.

3. People in Westerns always carry the Model 1892 Winchester. It is a beautiful gun, with an easy to operate lever action. Cowboys loved it so much that they, at least in the movies, carried it decades before it was invented. In some movies, soldiers in the Civil War carried them.

4. How many times have you seen someone in the movie fire several rounds from an automatic during a gunfight, then take careful aim, pull the trigger and hear the gun go “Click!” but not shoot because the gun is supposedly empty? This is impossible. When you fire the last round from an automatic, the slide stays back so you can reload the gun.

5. I have lost track of how many movies have the hero exhausted, wounded, and damn near hopeless after a long gun battle. He is down to his last bullet, his last chance to save the day. He takes careful aim and… misses. No! That never happens, the hero always wins. If this old chestnut didn’t always work, John McClane would have died in Die Hard 1 and not lived to have used it again in Die Hard 3.

6. In almost any of the Lethal Weapon movies, Mel Gibson empties his automatic, shoves in a new clip, empties it again, reloads, then shoves the gun inside his pants and chases down the enemy. Obviously, Mel has asbestos underwear because that gun would be hot enough to burn off his manhood.

7. Machine guns cannot shoot forever. If for no other reason, there is the matter of ammo. Let’s use the M60 machine gun from Rambo. This gun fires 600 rounds a minute. Rambo shoots it for about 5 minutes, by which time the barrel would have melted and even Rambo would have been tired from carrying over 200 pounds of ammunition.

8. Why do bad guys throw away their guns when they run out of ammo? Guns aren’t free: somewhere in the world there might be more ammo, and your fingerprints are all over the gun, so why would you throw it away? And why does anyone empty his gun at Superman, see every bullet bounce off his chest, and then try to stop him by throwing the gun at him? This is a bad idea if for no other reason than the fear of where Superman might shove the gun. And why does Superman always duck when they throw the gun?

9. No one can hit anything shooting a rifle from the hip. If you could, guns wouldn’t have sights and God only knows what shape the stock would have.

10. Bullets rarely spark when they hit buildings, sidewalks, and cars. They never spark when hitting trees, bushes, and wooden walls. Bullets are not stopped by sheetrock walls and normal doors. Bullets do not ricochet 15 times and then kill people. When thrown into a fire, cartridges do not make a loud firing noise and then kill someone. And they do not make cars flip over and explode.

Yes, I make rude comments in the movie theater when I see these mistakes. And yes, my wife hates it when do this. But you should hear the Doc bitch about every medical show. According to her, Dr. House holds every X-Ray upside down and/or backwards.
Posted by Mark Milliorn at 12:01 AM