My Brush With the Klan

The morons are still out there, but today, they are like a lot of other vermin—you have to go looking for them to find them.  They shun the light in most places—hiding under rocks and/or secretly meeting in darkened basements.  For most of my life, we never heard of the Klan except at elections, or about large gatherings of inbred morons in some swamp-water town in Louisiana.  The Klu Klux Klan was a relic from the past that was slowly dying out like aging war veterans from a previous century.

It was a different war, far removed from the Old South, that briefly gave renewed life to the old Klan.  When the United States withdrew from Vietnam in 1975, we left a country devastated by war.  As the communists moved in from North Vietnam, fear of reprisals forced millions of our former allies to seek asylum in neighboring countries.  In small rickety boats of every description, Vietnamese refugees attempted to cross difficult seas to reach Hong Kong, the Philippines, Thailand or Indonesia.  No one will ever know exactly how many of these “boat people” died in the attempt, but it has been estimated that more than half of those who attempted the difficult crossings were lost to storms, exposure, or to the predatory pirates who plagued the South China Sea.

Starting in 1979, Western countries resettled approximately 700,000 of these refugees and a little over 400,000 came to the United States.  I can’t speak about the experiences in other states, but in Texas, the arrival of thousands of Vietnamese was startling, since the state did not have much experience with Asian communities.  Along the Gulf Coast, many of the refugees found work in the shrimping industry.  While this sounds relatively innocent, these new Asian Americans touched off a resurgence in the Klu Klux Klan. 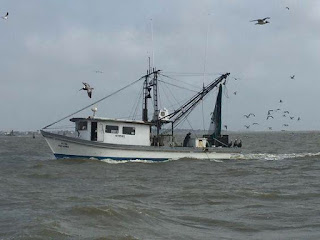 The Texas shrimping industry had already been hit with problems for years.  Too many boats had overfished the coast resulting inevitably in declining catches.  Fuel prices throughout the seventies had climbed, while imported shrimp had brought wholesale prices down.  Then, the Vietnamese shrimpers arrived bringing new problems.

One old Cajun fisherman came to the hotel I ran on Galveston Island and spent some time telling me about long fights over tangled nets.  Supposedly, the Texas shrimpers were used to dragging their long nets parallel to the coast—which meant mostly east to west.  The newly arrived Vietnamese shrimpers were used to doing the same thing—but in Viet Nam the coasts ran north to south.

There were language problems and cultural differences, too.  The Texas shrimpers claimed that the Vietnamese moved whole families onto their boats, lowering their labor costs.  Each side claimed the government gave preferential license treatment to the other group.  And the Vietnamese did this, while the Texans did that….and the KKK suddenly came roaring back to life.

It didn’t take long before there was violence in the form of shootings and more than a few boats that were burned to the waterline.

Meanwhile, I was running the old Jack Tar Hotel on Galveston Island.  While the shrimping industry didn’t really concern me, it was a relatively small island.  It was kind of hard not to be affected by the problems down on the docks.

The hotel employed a lot of African Americans, but when I took over the hotel, all of them were maids, housemen, and janitors.  When I hired a retired African American woman to work as a desk clerk, I got phone calls from people who were concerned that I might be trying to stir up Civil Rights trouble.  Frankly, I hadn’t hired the woman because she was black, I had hired her because she was a retired police officer and one of the meanest women I had ever met.  She was exactly the kind of person I needed on a beach front hotel on the island.  All of this was before the hotel’s owner suddenly had a wacky idea:  Why not open a Chinese Restaurant in the hotel? 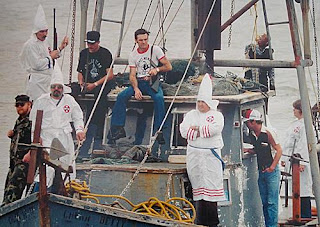 The old Jack Tar Hotel was huge, and had several bars and two restaurants—one of which had been closed for years.  The owner, who had nothing to do with actually running the hotel (that was my job) suddenly decided we needed a Chinese restaurant on the property, so I opened one.

At the time, I knew nothing about Chinese food—absolutely nothing.  I learned an amazing amount in a relatively short period of time.  For example, I learned that Texas (at least the Texas of forty years ago) was not a great place to buy the restaurant equipment necessary to run a Chinese Restaurant.  One of the things I had to buy was a Wok Range—a special gas range to hold several woks at one time.  I imported most of the kitchen equipment I needed from San Francisco, I hired several cooks from Houston, I hired Chinese waitresses, I printed menus, and "suddenly" we had a Chinese Restaurant.

At first, at least, the food was horrible.  I tried my best to learn, we made frequent changes, and thankfully, most of our customers knew less about Chinese food than I did.  After a few months, the food had improved, the restaurant was profitable, and the owner was happy.

Some of the not-so-good ol’ boys in town were less happy.  After the restaurant had been open for about two months, I got a call from the front desk that two men wanted to talk to me and were waiting in the lobby.  When I arrived, I found two men dressed in what you might call “Texas Casual”.  All three of us were wearing blue jeans, cowboy boots, and short-sleeved white shirts.

It’s been too many years, so I can’t remember exactly what titles these two idiots claimed to have, but the two men told me they were high bugger bears with the local chapter of the Klu Klux Klan, and wanted to discuss the hiring practices of the hotel with me.  There were entirely too many Asians working in the hotel.  The only Asians working at the hotel worked in the Chinese restaurant, but evidently that was too many.

Their visit, they explained was an unofficial visit.  If I wanted, however, they could arrange for a larger, more official meeting.

I probably stood there like an idiot for a while.  You just don’t expect dinosaurs from another era to walk up and self identify.  They weren’t wearing their mothers' bed sheets and they actually looked fairly normal (well, "Texas" normal), but there was no doubt that they were actually members of the Grand Order of Morons.  One of them even handed me his business card that proudly announced he was a Hungarian Horntail or something.  (This probably meant he carried the matches at the monthly book burnings.)

At this point, I’d like to remind you that I said I had a brush with the KKK.  It was not a long drawn out war—it only lasted for a few minutes.  I have no idea what the protocol is when you are confronted with evil.  I can only tell you what I did.

When I got back, they were gone and I never saw them again.  Thinking back on it, I should have turned that desk clerk loose on them.

Note.  The real work of destroying the KKK along the Gulf Coast of Texas was done by Judge Gabrielle MacDonald in 1981-82.  The first African American federal judge in Texas, she ruled the Klan’s actions agains the Asian shrimpers was in violation of the Sherman Anti-Trust Act.
Posted by Mark Milliorn at 12:01 AM