Though the presidential election is a year and a half away, it seems to be the only topic any of the news shows want to discuss.  Obviously, the country has no other pressing problems that need our attention, so all that matters is the upcoming election.

Okay.  I’ll play along.  About once a year, I set aside a blog post to explain why both of the major political parties are fornicating skyward.  This is one of those posts

In the interest of honesty, fair play and a deep desire not to have any of this shit blamed on me, I will disclose that I voted for neither of the candidates from the two major parties in the last presidential election, nor plan to do so in the next election.  I’m a Libertarian, which means my party loses in every election.

I recently read a book about a lone terrified monarchist hiding in a Paris cellar of a friend while the madness and hysteria of the French Revolution rampaged up and down the avenue outside.  That is exactly what it feels like to be a Libertarian.

Starting with the incumbent, the Republicans are doubtless going to unite behind Trump….Again.  Since no sitting president has ever been denied the nomination of his party, Republican challengers like William Weld of Massachusetts will fail.  The Party of Family Values will unite behind someone devoid of almost any values.  While Trump seems to be winning (at least at this time) the trade wars and is responsible for an outstanding economy….Well, I am still waiting for him to be as ‘presidential’ as he claimed he could be.

At heart, I’m just a poor dumb ‘ol country boy, so I tend to judge presidents by whether or not I would want them as a neighbor.  Using that gauge, the last president that I wouldn’t mind sharing a fence line with would be Truman.  I’ve got nothing personally against Trump, but I’m not sure I want to live next to someone with a twelve story barn painted gold.

Out of the crowded field of Democrats, I can only assume that the eventual nominee will be Joe Biden.  So the party of young and idealistic—if not very pragmatic—politicians, the party that prides itself of being sexually and racially diverse, that party currently has as their top two candidates….Two elderly white men.  According to the latest polls, either of these two men ranks higher than all the female candidates combined. 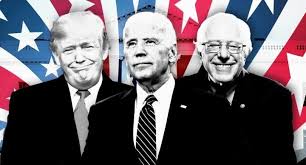 The leading candidates are Donald Trump, Joe Biden, and Bernie Sanders.  Really???  The top three candidates are all white males in their seventies?  Their combined ages is older than the constitution.  Hell, if you go back that far in American history, you’ll find another President so old he wasn’t using his own teeth: George Washington.

Judging by the current polls, I can only assume that Job Biden will capture the nomination of the Democratic Party, after all, he’s the one with the hands on experience.  This is likely, barring some kind of disqualifying accident, such as Joe being left alone with a live microphone for about five minutes.

How exactly did we end up in a situation where the dominant campaign strategy of both parties is to keep their respective candidates isolated and incommunicado as much as possible?  At this point, the likely victor will be the party that can keep its candidate locked up in an attic closet the longest.

On one hand, we have a senior citizen who can’t help but accidentally make strange statements and the other hand, we have an equally old man who talks crazy on purpose.  Who would ever believe that we would look back and think George W. Bush was, by comparison, eloquent?

All of the presidential candidates in both parties are in desperate need of some education in basic economics.  While most of their loony ideas are probably not really meant to be taken seriously, some of the nonsense being offered as serious potential platform plank material  borders on insanity.

Let’s start with the various plans to revamp the energy needs of the country.  While I have no doubt that theoretically the this country could completely revamp our energy production to be totally “green”, the cost of doing it would so completely devastate the economy that any party attempting such foolishness would immediately be voted out of office.

“Our ten year plan to switch to green energy begins with political suicide in the second year,” said no politician ever.

Nor is any plan to produce clean energy remotely feasible without the inclusion of nuclear power.  Germany tried to switch from nuclear power to renewable sources, and has seen its use of carbon-based fuels steadily rise.  France meanwhile, talks about renewable energy sources while firmly retaining its nuclear power plants.

Oh, please!  The Japanese and Russian nuclear power plants were old technology that was being maintained by cultures that refused to admit the possibility of failure—an absolutely guaranteed recipe for disaster.  Here in the United States, more people are killed annually falling off roofs while installing solar panels than have ever been killed by our nuclear power-plants.

We have the technology for practical methods of active carbon capture, but they require amounts of electricity that are available only with clean nuclear power.  I live in a state faced with a staggering shortage of potable water, yet we sit on a pool of salt water that is estimated to be equal in size to Lake Erie.  Desalination, like carbon capture, needs nuclear power to be economical.

And why is it so hard to understand that you cannot tax wealth to the extent mentioned by so many candidates?  Ignoring the morality of such confiscation, wealth is the most fungible commodity, and all historical confiscatory attempts have invariably failed.  Innovation and entrepreneurship occur only where they are most rewarded, and in the long run, countries profit from such endeavors.  Argentina and France both have experimented with “excess wealth taxes” which immediately triggered capital flight.  The former country triggered decades of industrial decline and the latter quickly halted the experiment when it found that efforts to collect the taxes cost more than the amount received.

One of the presidential candidates (one who evidently has to tie a pork chop around his neck to get the family dog to play with him)  recently said, “Here’s the truth, brothers and sisters, there’s plenty of money in the world.  It’s just in the wrong hands!”  That may be the single most ignorant, hate-filled statement from a politician since George Wallace.

Both parties need to understand that all taxes and all tariffs are paid by the end user, not the company providing the goods and services.  Taxes and tariffs do not necessarily regulate the prices of goods or service; instead, they invariably regulate the quantities of those things available.

Let me put that last so simply that even a politician will understand it:  There is less of anything you tax, including prosperity.  Conversely, there is more of anything you subsidize—even poverty.

Once again, both political parties have somehow maneuvered themselves into a position where neither party will run a candidate it truly wants.  And, once again, the voters will be left with the odious chore of choosing the least objectionable contestant.

Or, alternatively, you can join me in the cellar of political discontent, shutting out the organized terror and madness of the two dominant parties and vote Libertarian.  You’ll still lose, but it will be in a good cause.