In a party line vote today, the New Mexico legislature voted to deny marriage rights for gay pets. After narrowly passing a vote in the House Committee on Domestic Pet Affairs, the measure failed to muster enough votes to pass a floor challenge despite the efforts of powerful lobbying groups.

Outside the Round House, protestors had gathered both in support of and against the bill. Speaking for the Coalition for Animals Rights Programs (CARP), Linda Nevins-Smith said, “If we deny the right for gay pets in New Mexico to marry, they will just have to travel across state lines to more progressive states in order to exercise their basic civil rights. It is high time that New Mexico joined the list of modern states that recognize the rights of all of their pets, not just the straight ones.”

In opposition to the bill, the Churches Reacting Against Zealous Immoral Excesses (CRAZIES) spokesperson Susan Kling stated, “If we allow gay pets to marry, this will destroy the sacred institution of pet marriage as handed down by God. The only legitimate reason for pet marriage is to protect the litter. Obviously, gay pets have no litters to protect, so their being married is senseless.”

Ms. Kling went on to explain, “We are against this bill as it represents just one more step along the path of general erosion of all pet marriages. If we allow gay pet marriage, what’s next? Marriage outside breeds? Just how long will it be before someone is demanding the right for a dog and a cat to marry?”

“Besides,” Ms. Kling went on to explain, “Everyone knows it’s okay to have gay pets plan marriage for others, but not to have their own” 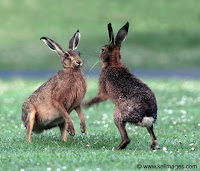 A third group, representing local sheep ranchers, was concerned about the expert testimony given before the Committee for Domestic Pet Affairs concerning the behavior of some male sheep. When scientists from the state agricultural college testified that rams frequently mounted other rams, northern ranchers quickly responded. Speaking for the ranchers, Buck Smithers said, “Them sheep ain’t gay. They’re just confused. When we catch them at it, we run out there and beat them off.”

A last minute compromise measure failed to win support in the legislature. The Pets Allowed Weddings bill, commonly called PAWS, would have established civil unions for gay pets, including full visitation rights for pet partners at veterinary hospitals. The measure failed to win support when supporters of Gay Pet Marriage refused to support the compromise bill, pledging that they would either pass the original bill without amendments or seek to win redress in the courts.

Conservative groups are demanding that the governor support a constitutional amendment to ban gay pet marriage. Political insiders consider this a tough sell in a state with financial difficulties and high unemployment.

Speaking off the record, a spokesman in the governor’s office said, “The governor will undoubtedly be torn between defending a sacred moral institution and taking advantage of a tremendous opportunity to boost the economy. Come on, you just know those gay pets will go all out. Designer wedding cakes, little sleeveless tuxedo sweaters, and iced sculptures of clipped poodles that pee catnip liqueur. Every gay pet in the state will be registered at PetSmart. It’ll be fabulous! Gay pet marriage might be just the shot in the arm New Mexico’s economy needs.”

Regardless of the eventual outcome of the bill in the legislature, a court challenge is expected.
Posted by Mark Milliorn at 1:02 AM