Tackle the Goon with the Balloon! Or… Of Course the Administration Are Athletic Supporters

Recently, there has been a controversy on campus concerning the wisdom of transferring millions of dollars originally earmarked by the state legislation for academics into a failing athletic program. Normally, this is not the kind of thing I would write about, but several students took time off from their usual pursuits, drinking beer, attempting to find a parking spot, and making tricycle motors, to ask my opinion. Wow! My blog is getting requests. 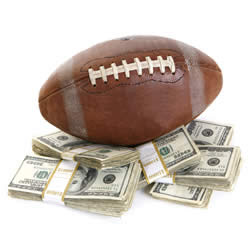 Okay, here’s what I think. I’m pissed! Screaming book throwing and kick holes in the wall pissed! Here I am, trying to write the occasionally humorous blog inspired by nothing but beer and insomnia and suddenly I am all but blown out of the water by the kind of flaming stupidity that could only be the result of higher education. How the hell am I supposed to compete?

Let’s see, we are not replacing retiring professors, we have a form of a hiring freeze, tuition is going up faster than a coed’s skirt at a frat party and yet somehow the administration believes we can spend millions more on an athletic program that is not only irrelevant to our core mission of education, but has a win/loss ratio that makes the Confederacy look good.

Why are we doing this? I can only imagine that our regents are using LSD as an enema.

We have some great student athletes. Actually, the “student” part of that phrase is mostly the result of the women’s teams, whose grade point average is offsetting that of the men’s teams. We must have women competing in just about every possible sport. If we bring in one more illiterate basketball player, we may have to invent a new sport. Women’s Competitive Serial Killing. Olympic Style Brain Surgery.

There are some male athletes that deserve mentioning, I have a student right now that I will call Matt. (Because that is his name.) Matt really works at his education, he deserves the grades he gets, and someday soon he will make an exceptional high school teacher. But would anyone doubt that he wouldn’t achieve that goal if he hadn’t been a football player?

My real complaint with the athletic program is not the cost, after all, New Mexico is a rich state and we can afford to have the best possible losing team. Actually, it doesn’t really matter if we win or lose. My real objections are what this program does to the young men involved. In far too many cases, we import minority children from inner city slums, bring them to the university with the empty promise of an education they are ill-prepared to receive, sweetened ever so slightly by the dream of a lucrative career in professional sports. Their training and travel program prevents all but the occasional Matt from any real chance of an education. We fans sit in the stadium, entertained by their labors until either their eligibility or their physical abilities end, and then we discard them like a used Kleenex. All too frequently they return from whence they came, no better educated and hopefully only slightly the worse for wear.

Personally, this sounds like twenty-first century slavery, and I am embarrassed by my involuntary part in the slave trade.

Are you looking for the jokes? They are at almost every high school and university around you. It is hilarious how we eliminate subjects like foreign languages, art, music, civics, and economics from our public schools while channeling ever more money into a competitive sports program thinly disguised as Physical Education. Meanwhile we all complain about the rising cost and worry about how tomorrow’s work force will compete in the global market.

Physical Education. Christ on a stick, we're getting screwed here; we are producing a steady stream of undereducated high school graduates so fat they can barely fit into a phone booth. Okay, here’s a joke. What’s the difference between an elephant and the typical teenager? About 5 pounds. And if you want to make up the difference, force feed the elephant.
Posted by Mark Milliorn at 12:01 AM