The Three Appliances of Heaven

Looking out at my students in class today, I could count more expensive electronic gizmos than students.  There were more iPads, headsets, laptops, and cell phones than it would take to open a good sized Best Buy.

There is also a similar scene in the parking lot.  Where do "starving students" get the megabucks to buy these new cars?  (And these are not used cars or economy models.  No–that kind of car is only found in the faculty lots).

Students today seem far more concerned with things than ideas.  When my wife and I were younger, perhaps we were materialistic, too–but our wants were much more modest.

There was a time--not that long ago--when my wife and I, too, were poor, starving students.  The Doc was in medical school with an annual tuition bill that made my eyes tear up every time I read it.  We lived in a tiny, cramped rental house near the campus, drove a $300 pickup that was old enough to vote, and had as our only luxury items, way too many books (and an indecent number of cats).

And we were pretty happy–the kind of foolish happy that can only come with youth, optimism, and hard work, mixed with an equal amount of stupidity, naiveté, and immaturity.  We didn't want for much, but there were a few things we deeply craved:  Appliances.  We really wanted appliances. 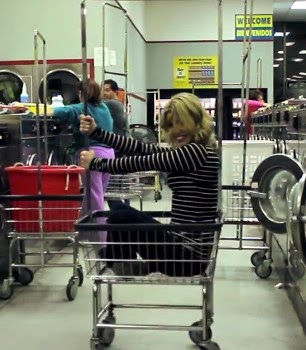 There was a Hell–and we knew exactly where it was.  It was the quarter-gobbling, hotter-than-a-pawn-shop pistol, and noisier-than-an-iron-foundry laundromat, located a mile from our house.  This was the Hell where my wife and I spent what little free time we did have--among the screaming children who ran up and down the aisles between the washers and the dryers.  Man!–but we hated that place!

So we dreamed of a washer and dryer.  The house we lived in had a laundry room, but the only thing we kept in there was a litter box.  We also wished for a dishwasher, but that was clearly beyond our means.

Then, beginning with the Doc's third year of medical school, she began her clinical rotations.  The first two years of medical school, she had spent mostly in classrooms or studying at home, but during her clinicals, The Doc actually saw patients and worked in medical labs...and pretty much stopped coming home.  There were probably widowers that spent more time with their spouses than I did.

Naturally, I got bored.  Speaking with the wisdom that only comes from being in my fifth decade of marriage–a bored husband is damn near certain to get into trouble.  Luckily for me, my "trouble" was my sudden decision to solve our appliance problem.

I scrounged around in the local junkyards until I happened upon semi-buried treasure.  I found a washing machine, a dryer, AND a dishwasher–all inoperative (of course!), all filthy, and all for sale.  For only $75, we became the proud owners of all three!  Of course, none of them worked and there was absolutely no way that we could afford to have them fixed.  Unless (of course), I did it myself.

Fixing appliances was something I knew nothing about–perhaps less than nothing.  But, I had tools and an empty garage.  I started with the washing machine. 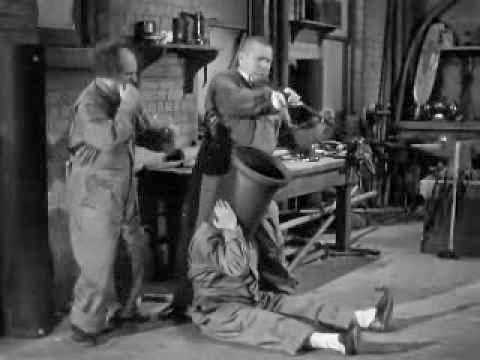 What a hunk of junk!  I took that washer apart and put it back together at least a dozen times before I understood how it worked...or, well...didn't work.  If people could see the innards of major appliances and know how poorly they are made, before they bought them, they'd think twice about buying them.

Once I got that enamel-coated exterior off, I had something that looked like it had been assembled by the Three Stooges.  The balancing weights were made of rebar and coffee cans filled with concrete, and the metal frame was a weak amalgam of old wheel weights and rusty beer cans, that had been case-hardened by dipping the whole mess into a languid pool of rancid butter.

It would have been easier to have crafted a better appliance out of nothing but pig shit and wax paper–but it was the washer I had, and it was still a hell of a lot better than going to the damned laundromat...well, it was going to be.  It took months, but with a few scrounged parts from the junkyard and a brand new solenoid....it worked!

Note:  The Doc just reminded me that we had to lift the lid during the rinse cycle for roughly five minutes or it would flood half the house.  Now, while this is true, it is also immaterial.  This minor sacrifice got our clothes clean and occasionally cleaned the laundry room floor.

The Doc and I were as happy as if we had won the lottery!  No more scrounging for quarters!  We could wash our clothes at home!  True–we had to dry our clothes on clotheslines stretched across the backyard (And sometimes, across the garage and across the bathroom, too–it rains way too damn often in San Antonio!), but it would wash clothes!  It also made enough noise to be heard from the street out in front of the house, but who cared?  It worked!

Next, I worked on the dryer.  Back then, these were actually fairly simple machines.  I replaced the nichrome wire that formed the heating element and thought I had it fixed.  But, when I started the dryer, I discovered that the drum was out of balance.  God!–I labored over that thing for weeks!  If the drum was not positioned perfectly, the result was immediate: wild shaking and a high-pitched screech that gave me the galloping shudders and made my eyes cross.  Imagine a motorized version of scraping fingernails across a blackboard.

I had originally wanted to learn how this thing worked by dismantling my mother's dryer, but she stubbornly refused to aid in my education.  These days, of course, I would spend 15 minutes with Google and download a service manual, but back then....well....I.... improvised.  Through trial and error (and even more error), I eventually figured it out.  I drilled out rivets and substituted sheet metal screws....only to discover that there was a reason why the original manufacturer had used rivets.  So, I took out the screws, drilled new holes and learned how to use a pop riveter.

And eventually–against all odds–the damn thing worked.  True, too, just like the washer, the dryer shimmied "a little" during operation, but if we wedged a pillow between the two appliances, this was enough padding to keep the two machines from disassembling themselves.

By this point, my appliance repair skills had considerably improved.  I think it took me only a few days of tinkering to get the dishwasher to work.  It was a monstrous, roll-around box that had to be moved next to the kitchen sink and then connected by a special water line to a faucet.  The capacity was small and the unit was as ugly as homemade soap, but...it worked!

What a difference these three appliances made in our lives!  Who knew that Heaven consisted of just a washer, a dryer, and a dishwasher?  That was forty years ago--and other than buying our home, no single purchase has ever made us as happy as those three busted appliances.

In some ways, I feel sorry for the students today.  They will never experience the happiness of overcoming the challenge of a car so old that you push it almost as much as you ride in it.  No $900 smart phone will ever bring the happiness my wife and I received from a truckload of scrapped second-hand appliances.  We knew we were rich!