Crassus got his start working for his father, a Roman consul.   When his father was appointed to be the governor of Spain, Crassus accompanied him and was responsible for the operations of the silver mines that his father acquired.  That politicians seem to magically acquire wealth is a truism that is millennia old.

At the death of his father, Crassus inherited wealth—the exact amount is hard to determine, but in today’s money, it is somewhere between $10 and $100 million.  It is very difficult to compare monetary units from antiquity to today, as earning potentials and prices of commodities have changed so drastically that it is sort of like figuring out the square root of blue.  Let’s just say that the amount of gold Crassus inherited would make him a rich man at any point in human history.

Crassus was ambitious and eager to not only increase his wealth, but also to be recognized as a powerful politician.  In Rome, achieving this kind of power required a military background, regardless of your wealth.  When a civil war broke out in the Roman Empire between Marius and Sulla, Crassus correctly predicted the winning side, raising and equipping an army with his own funds and joining the forces of Sulla.  Though a private army sounds strange by our standards today, it was a common practice even in early American history.  Such private militias fought on both sides of the American Civil War, and if Theodore Roosevelt hadn’t raised the volunteer regiment of Rough Riders to fight during the Spanish American War, it is highly unlikely that he would ever have become president.

Crassus—and his army—fought for Sulla, who once he was victorious took over the leadership of Rome and promptly began punishing his enemies by publishing a proscription list naming his political and military opponents.  If anyone listed was killed, his executor received a reward for his service, while the property of the executed was seized by the state and auctioned off to refill the Roman treasury.  Sulla turned over the proscription process to Crassus.

It is at this point in our story, that Crassus becomes a real estate tycoon.  First, to settle a few private vendettas, he added a few names to the proscription list—notably those who were men of property.  Second, at the public auctions, Crassus purchased slaves and real estate at bargain prices.  You can easily imagine that other wealthy people might have prudently decided against competing too vigorously in those auctions for fear that they, too, might find themselves added to the proscription list.

Crassus had a real skill in recognizing the value of the men who worked for him, reminding me of an old story—possibly apocryphal—about J.P. Morgan:  When the famous financier was asked what his most valuable asset was, the reporter probably expected to hear about a bank, a railroad line, or possibly a factory.  Instead, Morgan answered, "My good men. Take away everything else, but leave me my good men and in five years, I will have it all back."

In the case of Crassus, there was very little chance that anyone would take away his good men, as they were his slaves.  Crassus not only bought slaves with talents (particularly architects, stonemasons, and carpenters), but he actively schooled his men, teaching them to read.  Frequently, Crassus, himself, acted the role of teacher for such classes.

Among his slaves, Crassus raised a 500 man private firefighting force.  Although the population of Rome was nearing a million residents, the city lacked any municipal firefighting force.  Since the majority of the inhabitants lived in cramped high-rise vertical slums and everyone cooked over open fires, major fires were a nightly occurrence.  On the first sound of an alarm, Crassus and his private fire brigade would rush to the site and….calmly watch the building burn.

Crassus would volunteer to buy the structure from the panicked owner at what were, quite literally, fire sale prices.  The owners could either accept the paltry offer or continue to watch their investment go up in smoke.  Usually, the owners accepted and Crassus would have his men put out the fire and begin making repairs.  Frequently, Crassus would then rent the building to the former owner or tenants. 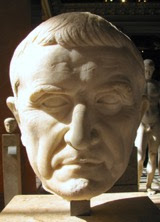 Such practices were both legal and ruthless.  It did not take long before Crassus (pictured at left with a Roman combover haircut) was not only the largest owner of real estate in Rome, but according some sources, he owned over half the city.

The Civil War had thinned the ranks of the Roman Senate, and many of the senators remaining were resistant to Sulla’s heavy-handed changes, so Sulla expanded the Senate from 300 to 600 men, appointing 450 new senators to fill the vacancies.  Senators were expected to live in suitable houses with ample servants, both of which Crassus could happily provide at bargain prices.

Now a wealthy man with excellent political connections, Crassus began to loan money to impoverished men of potential that he believed had a future in Roman politics, such as the young Julius Caesar.  These friendly deals allowed Crassus to not only secure political favor, but help to protect the vast wealth that he was amassing.

How wealthy was he at this point?  If you took just the amount of gold that Crassus could have raised by liquidating his holdings, then use today’s price as a measure, Crassus was worth somewhere between $2 and $10 billion dollars—which coincidentally, is roughly where Forbes Magazine guesstimates the present worth of President Trump.

To cement his political power, Crassus needed a military success.  Though the initial slave revolt of Spartacus was only 78 men, the repeated bungled Roman attempts to squash the revolt brought an additional 120,000 rebels to join the former gladiator.  By the time Crassus volunteered to lead an army to stop the revolt, it was a crisis that threatened the empire.  a small slave revolt had grown to what historians call the Third Servile war.  (You know you have a problem with “the help” when you have to start numbering the wars with them.)

In the early days of the campaign, one of the Legions under Crassus bolted from the battle field.  Crassus solved this crucial morale problem by reintroducing the old Roman custom of decimation.  Of the 500 men who had fled from battle, he divided them into ten groups of fifty, then by lottery, selected five men from each group to be executed.  While this might have been harsh, it certainly improved discipline.

Note.  I wish this was a lesson that all the talking heads in media could learn—decimate means to kill off one-tenth.  You cannot decimate a group of people to the last man as there are always nine left.  Perhaps if we decimated a few news organizations they could remember that a tornado cannot completely decimate a trailer park.

With careful tactics and a newly inspired army, Crassus crushed the army of Spartacus, killing most of the rebels while capturing 6000, who were crucified along the 350-mile length of the Appian Way.  With typical Roman attention to detail, the crosses were evenly spaced, with 17 executed men for each mile.  No one knows whether Spartacus was among the crucified or had perished in battle.

For his victory, Crassus demanded a Roman triumph upon his return, but the Senate—wary of his popularity—agreed only to a lesser ceremony, an “ovation”.  Crassus agreed, then from his own pocket had 10,000 tables set up along the processional route, gifting the people with the equivalent of enough food to feed the entire city for three months (effectively turning an “ovation” into a massive political rally).  In essence, he gave himself a triumph as evidenced by his wearing the laurel wreath reserved for triumphs instead of the traditional myrtle wreath used for ovations.  While the mainstream media—I mean Senate—hated it, the people of Rome loved it.

Back in Rome, Crassus funded the election of Julius Caesar to become the Pontifex Maximus.  As rivalry for leadership in Rome continued, it was Caesar who fashioned the First Triumvirate in 60 BCE, in which power was divided among Caesar, Pompey, and Crassus.  For a while, this move even created a sort of uneasy peace in Rome.  Crassus, however, believed he needed a bigger military victory to cement his position and used his political clout to secure the governorship of Syria, making no secret that once there, he intended to start a war with the Parthian Empire to the East.  (What was once the Parthian Empire consists today of Iraq, Iran, and a chunk of Turkey).

That Crassus was also after the gold of Parthia was no secret, nor was it a secret that there was no pressing need for such a military invasion.  Upon his arrival in Syria, Crassus promptly led an army of 40,000 Roman soldiers over the Tigris River—an act that was effectively a declaration of war.

There is no need to describe in detail Crassus’ defeat at the Battle of Carrhae as there are endless books about the subject.  (I recommend Sampsons’ Defeat of Rome in the East.) The biggest single error was that Crassus expected the Parthians to fight like all of the other enemies that Rome had vanquished, which is to say by a pitched infantry battle fought in close combat.  Though the Romans outnumbered the Parthians four to one, the Parthians’ army consisted entirely of cavalry, most of whom were archers.  The Parthians simply refused to engage the heavy Roman infantry, but slowly destroyed their enemy at a distance with an inexhaustible supply of arrows.  If the Romans rushed the cavalry units, the Parthians would withdraw while turning almost 180 degrees in the saddle to launch arrows at their pursuers, the infamous ‘Parthian Shot’.

Crassus failed because he assumed his enemy would fight along traditional lines, and so he died along with half of his men (another ten thousand were taken prisoner).  After the battle, the Parthians supposedly poured molten gold through the mouth of the severed head of Crassus to quench his thirst for gold.

In the end, Crassus did get his triumph...in a way.  From among the survivors, the Parthians selected a Roman who resembled Crassus to represent the fallen Roman leader.  Dressing him in women’s clothing and deploying a small army of prostitutes as his soldiers, the Parthians paraded him through the streets of Parthian towns, calling it the Triumph of Crassus.