The Olympics Come and Go 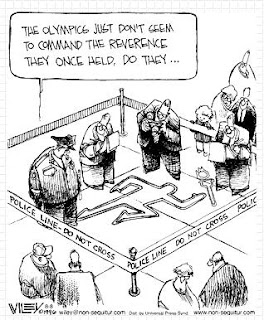 I just got an ad for next year’s Olympics. This shocks me in part because I thought the last one only ended a few days ago. I take it that the next one is in Canada.

Why should I care? Someone runs around a track and hands a baton to another guy. Big deal. Someone else runs and jumps into a sand pit. Where is the correlation to something in my life? My hurdles are a little different.

If you want me to watch, to sponsor, and most importantly, to buy, buy, buy all the Olympic related products, make the games more relevant to my life. In short, change the events.

Summer Olympics. How about freestyle lawn mowing? Or a 5 mile dash where someone takes one child to a band concert, another to dance/karate/music lesson, picks up the prescription at the pharmacy, takes the clothes to the dry cleaner, and still makes it to the bank before they close the lobby? Or Olympic parallel parking? You could have three weight classes; compact cars, sedans, and Suburbans without power steering.

Get the swimmers out of the pool and let’s see them clean it. Get the pool as green as mine seems to get every time I sneeze, and have them vacuum the pool with a filter system old enough to vote. Get the water cold enough to induce hypothermia and have them search for the car keys some teenager accidentally lost. After an hour, have the referee find them under a towel. A gold medal for the person who strangles the kid.

Garage cleaning, weed pulling, tree trimming, house painting, bicycle fixing, and checkbook balancing are more likely events for me than any field event. And cross country in my life means trying to fit an entire family and enough gear to supply an African Safari into a car designed by people in another country whose only manufacturing goal seems to be obtaining revenge for a war they lost. Then actually drive this car more miles a day than is covered by the average long haul trucker, all the while searching for decent food, cheap gas, and the mythical clean bathroom. Naturally, for that last event only women judges will be allowed. Weight lifting? Hah! Try carrying my wife's luggage.

Any number of sports could be made far more interesting just by making one of two small changes. First, blindfold the athlete. Pole vaulting and archery would immediately become crowd favorites. I would watch either event, although I admit it might be safer to watch the archery competition on television. For the second change, let the people in the stands secretly vote on the rules just before the events start. This would let a little logic enter the game. How long would it take a soccer team to realize that the goals switch ends after every point?

Winter Olympics. My favorite event would be furnace re-lighting. Wake the athletes up in the middle of the night by having my wife attempt to freeze brand them with her feet. Give them 5 minutes to relight a furnace as cold as a mother-in-law’s heart using a 5 year old book of moldy paper matches.

Lots of winter events could involve cars. What is the fastest time on record for putting chains on a station wagon? Or a free style ice scraping event. Let the athlete have a trunk full of assorted hardware except the standard ice scraper. That’s what separates the amateurs from the pros. I once cleaned the windshield of my pickup using a bent butter knife.

There is one current Olympic spectacle that I enjoy. I’m not even sure what the name of it is, but it looks like people sliding teapots on ice while other people sweep. This is probably not really a sport, but something bored fans are doing to pass the time. This kind of impromptu thinking should be expanded. Put two teams of athletes onto a frozen lake with a couple of basketballs, a few croquet mallets, and a hula hoop. Then just wait and see what happens. The spectators can vote on which team won.

Of course, lots of sports could be improved by mergers. Combine two sports to save time. Mix boxing with gymnastics. Synchronized hockey. Equestrian volleyball. My favorite would be to combine skeet shooting and ski jumping.

And lastly, let’s stop the contest of seeing which country has collected the most gold medals. That’s obviously no longer the point of these games. Let’s rank the countries by whose citizens spent the most money on what were once games.

Posted by Mark Milliorn at 8:21 PM