I love living in New Mexico. I love the food, the open spaces, and especially our climate. We have the best weather in the country. I even love the hot summer days and the occasional dust storms. I figure if it wasn’t for these, we’d be about ass deep in Yankees.

For years I used to think New Mexico politics was the best joke in the state. Somewhere during the last dozen years or so the joke stopped being funny. That’s a real shame, too. My favorite TV show used to be the local news. I watched everyday to see if the herd of drunken weasels we call a legislature had decided to repeal the law of gravity or mandate a 28 hour day.

For a long time, I don’t think the politicians wanted us to take them seriously. This is not hard to accomplish when your major piece of legislation is to adopt the State Official Question; “Red or Green?” If you don’t know, they are referring to which type of chile you prefer.

No longer funny, what used to be a comedy show has become a form of Greek tragedy. And like every Greek tragedy, we have formal steps. First is the prologue, where the principal actors, in our case politicians, moan the horrible condition of the state and beseech divine intervention to save us from our self-inflicted stupidity. Then a local champion is elected, is acclaimed for his heroic deeds, suffers a tremendous downfall brought on by excessive hubris, and concludes with the whole state forming a chorus to sing lamentations.

That pretty well describes half the governors that have ever served in this state. Not that we have never had a good one, there was Lew Wallace. Before we were a state, President Rutherford B. Hayes appointed General Lew Wallace to be our territorial governor. Wallace didn’t believe New Mexico was a fit place for a woman; he was reluctant to have his wife accompany him. Evidently lonely, he spent most of his term writing his novel, Ben Hur. Luckily for him, his next posting was more hospitable, be took his wife with him when he was appointed to be the Ambassador to the Ottoman Empire.

Unfortunately, New Mexico became a state in 1912, and since then we have been allowed to elect our own governors. Most people in the United States forget that New Mexico has a very small population, so being elected governor is roughly analogous to being elected mayor of a city the size of Phoenix. In the last 20 years, I have lived within a block of the homes of the mayor, two county commissioners, and the governor.

What is wrong with our state? Too damn much. You know those various polls that rank the states? We come in 43rd in intelligence, 47th in teacher salaries, 49th in per capita income, 34th in business taxes, 42nd in lifestyle, 40th in health, 48th in opportunities for small business, 4th in teen pregnancy, 1st in violent crime, etc. I wonder if there is a connection between the first two? Every time the local papers print one of these statistics, the last line in the story is; “Thank God for Mississippi.”

And without a doubt, the state of New Mexico is first when it comes to feeding at the public trough. For every dollar New Mexico pays in taxes to Washington, we get $2.03 back for public programs. It constantly amazes me that the US government does not declare war on Mexico and force them to take us back.

Our politicians do try, but their efforts are somewhat laughable. The two current plans to jumpstart an economy is for us to attract more Hollywood movies while simultaneously building a space port. We should change the state motto to “We’ll Try Anything But Hard Work.”

Look at our state capitol, the Round House. New Mexico has the only round capitol building in the nation. This, at least, the state did right. The round shape is id 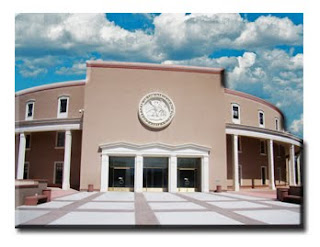 eal; politicians cannot be backed into a corner and can walk miles down circular halls, giving the appearance of accomplishing something while not actually getting anywhere.

I do have a few suggestions for our state. The first is relatively simple. Our politicians should follow the example of NASCAR drivers and wear patches on their suits to indicate their corporate sponsors. Every voter could tell at a glance which company owns which politician.

My second recommendation is just a little more radical. We should petition the federal government to become a territory again. By giving up statehood, we can let the president appoint our governors, closing the curtain on our Greek tragedy. We could save a lot of money on elections, and the quality of state leadership would have to improve.

Failing this, perhaps we could select our politicians the same way we get jurors; lottery. One morning, you could walk out to the mailbox and discover to your horror that you had been selected to serve a term as state senator. Chosen at random, the legislature would have to improve, hell, you could dig a pit in the desert and catch better people by accident. It would certainly eliminate the problem of term limits. There is only one small problem; how do we get the current politicians to vote for this?
Posted by Mark Milliorn at 2:11 PM