During World War II, various Melanesian and New Guinea islands were suddenly confronted with the advanced technology of both the Japanese and American armies as they invaded and set up airbases. The islanders marveled at the technology the soldiers brought with them. To a stone age culture, even a trash dump must have seemed like a wonderland. Think 1989 and East Germans running through into West Berlin. Think kid in a toy store. Think my wife in a jewelry store.

To the islanders, this was a perpetual Christmas. They thought the planes were messengers from the gods bearing wonderful gifts. Too soon for the islanders, the war ended. The planes flew away and the strange men left. The islanders waited and neither the men or the gifts from the sky ever returned. Obviously, the gods were angry. There was only one thing to do; copy the behavior of the soldiers so as to attract the planes again. 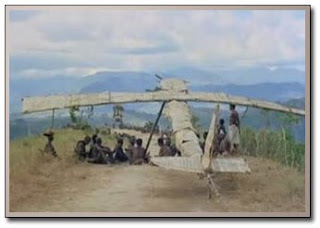 So the natives dutifully built bamboo replicas of planes, painted USA on their chest, made fake headsets out of coconuts, and even constructed a bamboo control tower. They lit signal fires and waved signal flags on the runways. All to attract the planes. Sounds sort of like an episode of Gilligan’s Island where the Captain and the Professor build an airport.

Anthropologists call this a Cargo Cult; where magical thinking and ritualized practices are supposed to produce quick wealth. In New Mexico, we call this the Spaceport.

Several years ago, our state managed to convince the voters to raise taxes in order to build a spaceport in Southern New Mexico. This is a poor state, there are few jobs, and most young people who get a degree in our state promptly leave the state for a job somewhere else. In an effort to jump start the economy, we started our own cargo cult. If we built a spaceport, the rockets would come. A multimillion dollar industry would land from the sky.

If you build It, they will come. I think I’ve heard this before. Unfortunately, so have the states of Virginia, Wisconsin, Alaska, Texas, Oklahoma, and Arizona. All of these states, and a few other countries, are building spaceports. And several of these have actually launched numerous successful rockets. So far, New Mexico has a nice concrete pad and nothing much to show for the proposed $225 million dollar project. 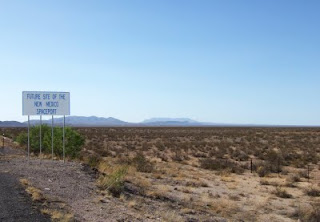 Well, that’s not quite true, we can show that we raised taxes, and starting next month you can go on a tour of the site. Save your money and just imagine a large rectangular concrete pad in the middle of a desert. And we have launched a few rockets, a few even worked. We launched James Doohan’s (Scotty from StarTrek) ashes. The rocket fell into the mountains and for a while was lost. Scotty would have done better to beam off.

But, we have a tenant. Richard Branson of Virgin Galactic has signed a million dollar a year lease for 5 years. It is heartwarming to think that by the year 2234 we will break even, if he continues the lease. I think Branson has found another virgin.

Well, if it is any consolation, he found another one in Sweden. He signed a contract with them, too.

New Mexico needs jobs, but we don’t want to do the things that will help jobs come here; lower business taxes, repeal closed shop legislation, reduce property taxes, etc. I guess there is nothing wrong with a cargo cult, but I wish we could have just built it out of bamboo. I don’t mind if the governor wants to run around the desert waving signal flags, but why does it cost $225 million?
Posted by Mark Milliorn at 12:01 AM