The fall semester is about to start-- the signs are all about me: increased traffic around town, the parking lots are getting busier, and every now and then someone shows up at my door wanting permission to take a course that is full. And if the students are like swallows returning to Capistrano, then the only appropriate tired old metaphor for the faculty would be a dog returning to its vomit.

Welcoming back old students is fun, and meeting the freshmen even more so. Every year, it seems like you are meeting students who are completely different from you, but by the end of the year, they seem perfectly normal. Consider the following:

Of course, in a lot of ways, they are just like students have always been. They sign up for early classes they will sleep through despite their best intentions. They buy all their textbooks, then put them under their bed and hope they can absorb the knowledge within by radiation instead of actually reading. And they gripe about the parking. 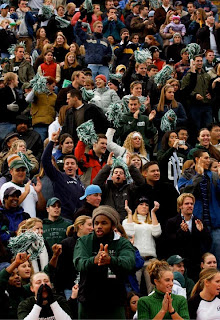 Has anyone ever gone to a school and not complained about the parking? And when they did complain, invariably someone will answer, “If you think the parking is bad here, you should have seen what it was like at the University of Old Fart; we paid twice as much to park three times as far, and we were glad to do it.”

What an idiotic argument. The administration tells us to respect the needs of our students while simultaneously treating them like a resource to strip mine. Admin, here is a hint for you: if you really want to treat students like customers, then you should realize two rules. First, if your customer thinks something is a problem, it is a problem. Secondly, no one ever won an argument with a customer.

We overcharge for food, parking, books, and fees. Since the tuition money pays for my salary, I firmly believe we are undercharging, or at the very least giving the student a hell of a bargain. As a whole, the university doesn’t seem to take the student very seriously, in this the students help by being as passive and non-complaining as church mice. They get angry, but they rarely complain.

The university will probably get away with this attitude, after all, it’s not like there are several other universities in the state that our students could… Oh, crap!

There is something else the students frequently want this time of year: advising. For years, I used to give all students the same advise, “Sex and real estate. Get all you can while you’re young.” In today’s tough economy, however, I think more is needed, and like the very best teachers I will use a parable.

It was graduation day and four new alumnae were walking across the campus for the last time. Suddenly, they found a strange machine blocking their path. There were rotating gears, flashing lights, and a steady hum coming from the device. The first student, who had just received his degree in physics, walked up to the machine and said, “How does it work?

The second student, with a new degree in engineering, said, “What does it do?”

The student with a new accounting degree looked at the machine and asked, “How much does it cost?”

The last student, with a degree in history, looked at the other three students and said, “Would you like fries with that?”
Posted by Mark Milliorn at 12:01 AM