I Suppose They Would Be Easier To Dust

One of the great reasons to read, study, or go to school is that moment of epiphany. For those of you who were education majors, an epiphany is that moment when you suddenly understand something, when a difficult concept suddenly makes sense for the first time. When Archimedes stepped into a bathtub of water, he suddenly understood that the volume of water he displaced was equal to the volume of the part of his body he had submerged. Archimedes was so excited that he yelled “Eureka” (Ancient Greek for “I have found it.”) and ran through the streets of Syracuse in search of someone to share his discovery. Since he was naked at the time, I’m sure that a few of the citizens of Syracuse might have been confused as to what he had discovered.

Archimedes understood that an epiphany is the second biggest thrill in life. If you don’t what the first is, you probably shouldn’t read my blog.

Perhaps the pursuit of that epiphany is the reason I love teaching so much. I’m positive it is one of the reasons I love books. I can picture my students reading a book I assigned-when they suddenly understand the message the author was trying to pass on. I cannot imagine this scene if they are holding a Kindle instead of a real book.

If the electronic book reader catches on, it will probably change the way novels are written. Computers quickly become addictive due to their ability to instantly reward the user. You win a game, something works, or you search for something, and you are instantly rewarded. The user is constantly receiving positive feedback from the computer. Will readers who are used to such instant gratification read patiently through several chapters of plot development? I doubt it. It is probably not a coincidence that graphic novels, essentially nothing more than flat-chested comic books wearing a pushup bra, are suddenly popular. If, somehow, a book written exclusively for an Ereader was actually good, would you call it a real page clicker? 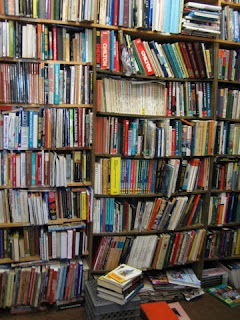 A co-worker here at Enema-U was bragging about her new E-Book reader. “It will hold 3,500 books,” she proudly said. Somehow, I sincerely doubt that she has read 35 books in her lifetime.
Does it matter how many books this device can hold? Theoretically, these things can hold a whole library of books the owner has read. And theoretically you could use my pocket knife to perform a heart transplant. What are the odds of either happening? Pricing this out online at Amazon, I can buy their Kindle for $139. For another $42,000 I can fill it to capacity. I probably have that many books in my home, and they are insured. I wonder what my insurance agent would say about insuring a virtual library.

I have accidentally hurt a few books. I have dropped a few in the bathtub, spilled coffee on a few, and occasionally torn a page. I lost a book once; this was in the third grade and it still bothers me. Several decades later, I was in Washington DC and visited the Library of Congress. I was delighted to find, and finish, “Binkie’s Billions” by Lee Wyndham. I felt better for having finally finished the book, but I am still a little upset for having lost it. What would I do if I dropped a whole library into a bathtub?


I love the feel of a well-made book. I like old leather-covered books-anything published by Folio Press-and I love the feel of good paper and a strong binding. Buying a book that contains a built in ribbon for the reader to use as a bookmark is almost thrilling. Just recently, I bought a first edition of the first Zorro story. The book, almost as old as my father, is printed on thick acid impregnated paper that is yellowing and smells of dusty bookstores. It is the perfect book to read about Don Diego and the plight of the Californian peasants. How in the world could a beeping (and bleeping) battery operated gizmo compete? 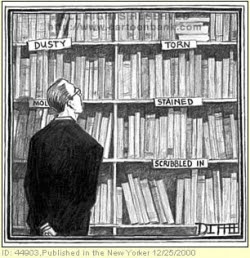 I have searched bookstores in a dozen countries. There was a marvelous half-timbered bookstore in Worcester that also sold 70 year old fountain pens. There is a great bookstore in Chicago near Wrigley Field that is home to a large cat who pushes books off the top shelves, so they will land on the customers. Evidently he disapproves of people taking away ‘his’ books.
I own autographed books, and books with comments written in the margins, and books with flowers pressed between the pages. I have a book by Lewis Carroll, that I bought the day I became an uncle, and I wrote a long passage on the flyleaf to my nephew, Matt. Have you ever bought a used book and found inside the cover a bookplate from the book’s first owner? Have you ever wondered, or perhaps even known, who that person was? What you might have in common?

Books are more than a collection of letters and words; they are an art form that cannot be replaced by a mere collection of electrons stored on a chip. I suppose that you could just as well store thousands of images of the collected paintings of the grand masters. Even if they call it the iGallery, it won’t be an art museum.