Because I Say So


A thousand years ago, King Canute ruled England. A Dane, he was a pretty good king and must have been a great warrior, for when he attacked England with 10,000 troops, King Ethelred the Unready promptly had a heart attack and died. This was the original “shock and awe.”

Once the faint of heart were literally out of the way, the new Danish King set about transforming England into a modern state, and it turned out he was a pretty good administrator. He divided England up into territories under lords who reported to the king, and established a legal system that lasted until the reign of the Tudors. He eliminated the danegeld, an annual extortion paid to Danish lords, to prevent their invasion and wanton destruction. And best of all, he established a uniform system of coinage, with the weights of the various precious metals matching those of the Scandihoovian countries. This encouraged international trade.

This was all pretty good administration, especially when you consider that it was all done without congressional committees, focus groups, or an advertising budget. King Canute was hot stuff, or at least his ministers thought so, and who could blame them? Anyone who could pacify a wild kingdom by scaring his enemies to death deserves more than a little respect.

King Canute eventually found all this fawning attention a little tiring, so he decided to teach his ministers that even the power of a king is limited. He had his ministers carry his throne down to the edge of the sea just as the tide began to come in. King Canute sat in his throne, waved his scepter and commanded the waters to stay back-for the tide to recede. By the time King Canute was about ass deep in sea water, even his ministers understood that there are limits to all power. 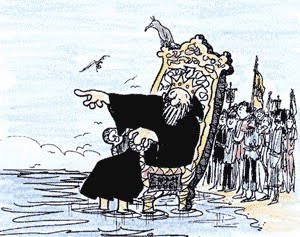 An alternative historical interpretation is that King Canute was trying to save the beaches from early climate change. If true, Al Gore owes King Canute a Nobel Prize.

The lesson of King Canute has been on my mind this week as the administration of Enema U has issued several new rules, a few of which seem to fail the test of King Canute.

From now on, anyone who is planning anything new at the university must submit a “pre-planning” form, seeking permission for said planning. This new document, the Compulsory-Mother-May-I (COMMI) form, will be submitted prior to actually beginning to plan. So, if you are planning to start a new project that might require planning… no wait… you have to submit the planning form before you can plan on planning a new project… But, if you submit the form before you begin planning on a new project, how did you know you needed to submit the form? Perhaps the entire faculty needs to submit a form just in case we might decide to start a project that might require planning. I would say that would be a good plan, but I haven’t submitted a form yet.

No less confusing is a new requirement that all signatures on university documents must be legible. Sorry, my legal signature is not legible. But it is MY signature. If you want to redesign my signature, it will automatically turn into YOUR signature. And you will have misspelled your name. I’ve been married long enough to know there are very few things for which I am in charge. The main items on the list are bugs and busted plumbing, but somewhere on that incredibly short list, I am fairly sure I am still in charge of my own signature.

This vaguely reminds me of my running fight with the local city government. They insisted that I spray paint my street address on my driveway in large black numbers. So, I did, but I did it in Roman numerals; MMCXXXV to be exact. Someone from the city showed up, took pictures of this, then left. They did this serveral times a week for about a month.  Eventually, someone asked me if I didn’t think this might be dangerous as it might prevent emergency personnel from locating my house. It is my belief that anyone too stupid to read Roman numerals will probably not be of much use in an emergency. This issue is not yet settled as the city (while sure that I have done something wrong) cannot decide exactly what law I have broken.

The latest rule from the university is an extension of the rule on signatures. From now on, we must sign everything in blue ink. This rule will insure that everyone can ascertain whether they are dealing with original or duplicate copies. Thankfully, no one would ever think of using any of the half dozen color copiers located in just my building alone.

What are we signing that is so important? Most of my documents deal with make-up tests, recommendations for students, and pleas to textbook publishers for a review copy of a book I can’t afford. No one has asked me to initial our nation’s launch codes lately. Who exactly is going to check these documents for legibility and correct color? And before this policy was approved, was there an appropriate “Planning to Micro-Manage” form filed in triplicate?

President Canute (by a strange coincidence, that is the name of the President of Enema U), a few of your ministers did not understand your last demonstration. Perhaps this time you could put your throne at the fifty yard line of the stadium and command our team to win a game.
Posted by Mark Milliorn at 12:01 AM