Charity Begins at Home; I Just Wish It Didn’t

Do you have people using the mail to beg for money?  I sure as hell do.  Almost every day I get a handful of letters wanting me to donate money for damn near everything.  I’m sure the causes are just: research for a cure for bedwetting, starving poets, retirement homes for the criminally stupid and perennially weird, and other such worthy causes.  On the same day, I got two letters--the first pleading for money to rescue homeless dogs, while the second letter asked for donations of food for a gospel mission.  I sent the dog request to the mission and the mission request to the animal people.  I figure if they get together they can solve both problems at once.  I even sent a note volunteering a recipe, but I haven’t heard back from them.


I get a lot of charities sending me address labels.  I guess I’m supposed to feel guilty unless I send them money.  Obviously, they don’t read this blog, but I do appreciate the little labels.  A few of them even spell my name right.  Since these people are obviously enamored with the postal service, I humor them by taking the time to stuff their prepaid postage envelopes with as much junk mail as will fit.  Before I mail it back, I make sure to use one of the little return address labels.  Anything else would be impolite.
The local electric company has an interesting idea of charity.  I have a letter soliciting donations to help pay the bills of people who can’t pay their own bills.  This almost sounds like a good idea, until you realize that what they are really saying is: “We think you should give us the money we might lose if these people don’t pay their bills.  We believe that instead of us losing money, you should.  If we can convince you to give us some money, we will only lose half as much while appearing generous!  Now that’s a good cause.”


This is a good racket.  I bet every company would like to figure out a way to convince people to make good their losses.  Somehow, I doubt that the local bank can convince us to make half of someone else’s car payment no matter how sad the story.
I have a similar complaint about a local group of otherwise fine local business men who organize a circus every year.  These fez-wearing business men do many excellent civic minded activities—but I simply do not understand their annual attempt to convince me to donate money so they can take blind kids to the circus.  I’ve got nothing against blind kids, but if the fez guys want these kids to attend, why charge them at all?  Hell, it’s their circus.


Actually, why go to all the fuss and bother?  Couldn’t you just take the blind kids someplace and sit them around a bucket of elephant shit while you played a recording of a circus?  The kids are blind--they can’t tell the difference.  One guy in a pickup could drive across the continent and take all the blind kids in the country to the circus.  In a pinch, I don’t suppose they could tell the difference between elephant shit and steer manure, either. 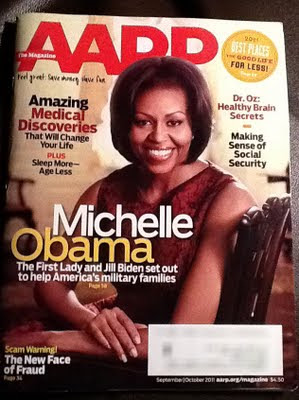 Everybody wants your money.  As soon as I reached my 50th birthday, the American Association of Retarded People (AARP), a group that evidently thinks senility is synonymous with retirement, started sending me…stuff.  Letters, flyers, and magazines--all with large and easy to read print promoting a fairly constant message: Send us money or evil Republicans will make you eat dog food!  Amazing Medical Discoveries!  Fiber is Your Friend!  Who knew that there was so much profit in pimping age?
I don’t think the AARP pays much attention to some of this--the literature is just an excuse to beg for more money.  This month’s magazine has a smiling picture of Michelle Obama on the cover.  Below that, and in what I sincerely hope is a separate story, it says:  “Scam Warning!  The New Face of Fraud!”
Posted by Mark Milliorn at 12:01 AM