Splish-Splash, There Goes Your Cash!

Someone once described a boat as a hole in the water which you try to fill with money.  While I have no direct experience with boat ownership, I can tell you that owning a swimming pool is pretty much the same thing, it’s a hole in the ground that you dug with money so you can fill it with water.

After 25 years of owning a pool, I’m an expert.  And I have all the receipts to prove it.


Having a pool can be a lot of fun.  I have fond memories of teaching the boys to swim.  Warm summer days and lots of sun, laughter and cold beer.    I also have plenty of memories of endless hours of vacuuming half the sand of Arizona out of my New Mexico pool.  I can remember adding chemicals to the water until my backyard would qualify as a superfund site only to have the pool turn emerald green the morning of a party.   Somewhere, probably deeply buried in the filter, is a critical need detector.  When you most want to use the pool, this sensor will shut down the pump motor, short out the wiring, or burst a pipe.
Oh, the joys of standing in the deep end of your dry pool as you slowly paint it with rubber based paint!  Actually, this job isn’t too bad--after about ten minutes of breathing in the fumes, you start to giggle uncontrollably.  It’s pretty much the same effect as quickly downing three dry martinis on an empty stomach.  Getting the pool clean enough to paint isn’t much fun, however.  It’s sort of like scrubbing a bathtub, only its 27 feet long.  Every time we paint the pool, I try to convince my wife to let me decorate it.  I’ve always thought we should paint an image of a drowned person on the bottom of the deep end.  She doesn’t want to tempt fate.
Years ago, I was writing late at night--it must have been about 3:00 AM.  My head was in a fog, I had been at it too long, and so I took a break and walked out in the backyard.  The night was warm, it was a moonless dark night, and the pool had been perfect the day before.  I stripped off all of my clothes, left them on a chair and jumped into the inky dark pool.  It felt wonderful: the water was cool and skinny-dipping in my own pool in the middle of the night was perfection.  I was really enjoying it as I slowly swam across the pool—at least until I swam face first into the dead squirrel!
It was amazing—I could tell it was a drowned squirrel without even seeing it.  What kind of leftover evolutionary trait is it that allows a man to distinguish, with only his face, exactly what kind of dead rodent he has swum into?  Was this a useful skill for cave men?
I immediately did my Jesus Christ imitation and levitated up out of the water and walked—on the surface—to the edge and turned on the light.  Yep.  It was a dead squirrel.  Actually, it was the first one that we had ever seen in our back yard.  He probably came over for a swim. 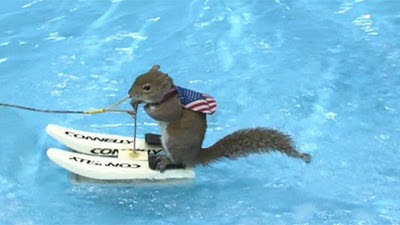 Strangely, I’m not the only one I know who has had a problem with squirrels in their pool.  A few houses down, a neighbor had an above ground pool that mysteriously drained in a single night.  On investigation, it turned out that a ground squirrel had tunneled up into the bottom of the pool.  Poor thing was probably thirsty--but he probably didn’t want the whole 10,000 gallons.
Another friend of mine solved the pool vacuuming problem by buying one of those robotic devices that crawl around the bottom of the pool sucking up leaves and sand.  She looked out her window one afternoon and noticed that the robot wasn’t moving.  She went out to investigate, and you guessed it—it had sucked up a dead squirrel, head first.
Maybe we aren’t meant to have pools in the desert.
Posted by Mark Milliorn at 1:15 AM