Why Men Do What They Do

Sandy, a colleague of mine at Enema U, was bragging this week about her husband rescuing her from imminent doom: he changed a flat tire on her car.  I know and like Sandy’s husband—and I know exactly why he changed that tire.  And so does every other man alive.

It is absolutely amazing what men will do for…uh…women.  I maintain that women are the main reason that man has ever accomplished anything.   Continents have been explored, rivers bridged, and castles built--all for women.  The Taj Mahal is not the only monument built for a woman--everything created since the invention of the upholstered cave qualifies.

To be fair, man--alone without female companionship--would eventually have created a few other things (a list most likely limited to hunting, fire, and beer).  I am sure that one day primitive man would have sat around a campfire, sated after a large meal of burnt meat, and as he slowly sipped his beer would have daydreamed about inventing a large block V8 engine with dual carburetors.  And then that same man would have thought about how much work that would require and probably would have gone back to drinking beer.  Civilization, without woman, would have peaked at the invention of the barbecue.

Naturally, I will offer you a story as proof.  Whole broad swaths of this story are demonstrably and provably true.  There are a few details, however, that might possibly be a little hard to track down, so I am changing a name.  It probably wouldn’t be that hard to figure out the guy’s real name--after all, I am using his real photo.  If you want to take the time, go for it.

Starting in the 1950’s and for the next 40 years, Red Adair was famous for blowouts (oil well fires).  Some of these oil rig fires shot flames hundreds of feet in the air.  Adair’s method of battling these fires was about as dangerous a job as imaginable.  First, a catskinner (that’s a bulldozer operator) would slowly approach the fire, with the rest of the crew walking behind the dozer to escape the heat.  An explosive charge was placed at the wellhead, and then the crew, all of whom were wearing special suits to protect them from the incredible heat, would withdraw.  With a large enough explosion, the fire could be blown out.  Then a new valve could be lowered onto the wellhead and Red Adair could fly home to Houston with a very large check. 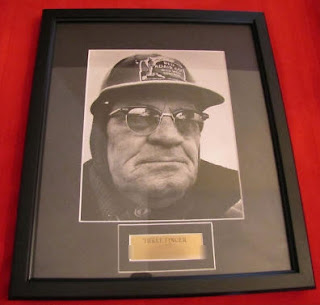 Some of the fires put out this way are legendary. The Devil’s Cigarette Lighter shot flames 450 feet into the air for 5 months until Red Adair blew out the fire.  On average, Adair put out about 40 such fires a year.  After helping to extinguish the fires in Kuwait following the first Gulf War, Red retired.

In 1962, as Adair and his crew were flying back from one of those famous fires, a newsman and a camera crew were waiting for him on the tarmac at Hobby Field in Houston.  Live cameras were new, and this reporter was hoping to get a story big enough that the New York office might notice him and move him out of Houston and off to the big show back east.  It was a longshot, but just the year before, a local reporter named Dan Rather had taken a camera down to Galveston and reported on the approach of Hurricane Carla.  That story had earned Rather a job in Washington D.C.

As the firefighters got off Adair’s private plane and made their way to their matching red Cadillacs, the reporter, followed by his camera crew, ran up and shoved a microphone under Red’s nose.

“Why do you do such dangerous work?” the reporter asked.  Adair glowered at the man and walked around the microphone.  Before the reporter could turn around and face the live camera, Three-Fingered Wallace reached out with his mangled hand and pulled the microphone over to him.

Three-Fingered Wallace was a catskinner and had worked oil fires alongside Adair for years.  Driving that bulldozer was dangerous work, accidents were frequent, and in one of those, Wallace had lost two fingers.


“Son,” he asked as the camera focused on him, “did you ever try to fuck a hungry woman?”
Why do men do what they do?  That pretty well sums it up.
Posted by Mark Milliorn at 12:01 AM