Thirty years ago, I was the Resident Manager at the Flagship Hotel on Galveston Island.  As I have written about before (and even before that), the Flagship was built on top of a pier extending out over the Gulf of Mexico.  You could even make an argument that the hotel was really a ship, since not only was she built entirely over water, but a few years before, a Governor of Texas, seeking reelection, had named the hotel as an official ship in the Texas Navy.   This was a signal honor that the hotel shared only with a couple of ferry boats and a beached submarine that had last tasted sea water during World War II.  Though small, the Texas Navy is far superior to any competing service offered by such states as Nevada, Iowa, or New Mexico. 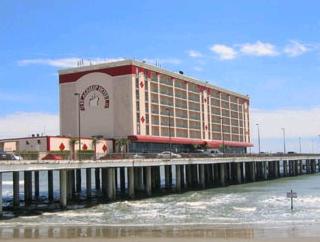 Though profitable, the hotel changed hands frequently.  Every new owner was convinced that he could quickly double the profits of the inn, yet within six months he would eventually realize that he had overpaid for the property and that the only way to recoup his money was to resell the hotel.  As in many other professions, the only way to amass a small fortune in the hotel business was to start with a larger one.


Our current new owners had decided that what the hotel desperately needed was a first class restaurant--an eatery that would bring people from all over the island to dine in our large restaurant, enjoying the beautiful views of the waves crashing on the beach.  Accordingly, the hotel hired a rather famous Cajun Chef from New Orleans.  While the General Manager and I would continue to run the hotel and the bar, the new chef was to be given a free hand to manage the restaurant as he wished.


Despite the new chef’s reputation, I first realized that the hotel might be in for some trouble when the chef and I had a small disagreement over the keys.  The chef and his crew would arrive at the hotel every morning about 5:00 AM and begin prepping for the new day.  First thing every morning, the chef would come to me and I would give him the large collection of kitchen keys.  There were about two dozen keys for the pantries, liquor cabinets, walk-in freezers and refrigerators, which were all kept locked up at night.  There was a small fortune in that kitchen.


Within the first two weeks, the chef managed to lose this set of keys four times.  If we could not immediately find the missing keys, all the locks had to be changed, each time.  Even the new owners were getting a little annoyed at this cost.  The morning after the fourth set of keys vanished, when the chef arrived for his keys, the key rings were firmly fastened to a large metal ring a foot and a half in diameter.  While the chef was very unhappy with me, he took the key ring.  And within a week, he had managed to lose it, too.


The chef never lost the next set of keys.  These consisted of a normal ring of keys welded to a six inch length of chain.  The other end of the chain was welded to an eight foot long piece of 2” water pipe.  The pipe had been painted with red and white stripes to resemble a barber pole.  It was heavy, cumbersome, and took two men to carry.    I promised the chef that if he managed not to lose it in the next few months, I might cut the pipe in half.  The chef was furious, but the owners backed me, and the new key ring-pole stayed for months.  As it turned out, that pole outlasted the chef.


The new chef made a lot of changes to the menu.  Shrimp Etouffee, blackened catfish, jambalaya, and gumbo were added to the menu. The restaurant was redecorated in a style that the General Manager and I privately called “Wrought Iron Whorehouse.”  And a small fortune was spent advertising the changes.  Unfortunately, despite the fact that our bartenders could now produce an excellent sazerac cocktail, the business in the restaurant did not dramatically improve--certainly nowhere near enough of an increase to justify the cost of the remodeling or the salary of the new chef.


Now, the summer was almost over.  Beach hotels start an inevitable decline in the fall until business revives with the arrival of Spring Break.  By now, our chef was desperate to prove himself and seized on an idea: an All-You-Can-Eat Cajun Night for the Friday night at the start of the Labor Day weekend.  The general manager and I thought this was a horrible idea, but the chef had been given a free hand.  We were astounded when the trucks began delivering the food for this dinner.  There were mountains of red potatoes, baskets of corn on the cob, and huge amounts of red beans and rice, but none of this compared to the thousands of pounds of live crawdads.  (Or as we say in Texas, “Mud Bugs”.)  Thousands and thousands of them crawling and snapping their miniature claws in large mesh bags that filled every storage place in the kitchen to capacity. 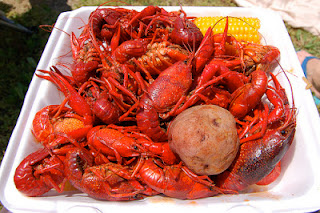 Within hours of the bags’ arrival, those damn crawdads were all over the hotel.  I suspected some complicity from the bellboys, but I couldn’t blame them.  The situation was hilarious to everyone but the chef.   I think the chef boiled about a thousand pounds of the critters as the sun set, in preparation for the horde of anticipated patrons.  Unfortunately, the patrons stayed away in droves.  We may have sold 25 pounds of crawdads that evening.  Maybe, but probably not.


The chef was surprised, but he had a new plan.  The next day, Saturday, he had the kitchen set up banquet tables on the sidewalk fronting the hotel.  He offered Cajun food to the throngs of people roller skating and walking along the seawall.  As it turned out, very few people want heavy Cajun food on an extremely hot day.  Another hundred pounds may have been sold.


The manager and I pitied the poor chef, but we had other things to worry about.  Chief among these worries was the sign on the roof.  In large fluorescent looping script, the illuminated sign read “Flagship” in blue light.  Or it would have if the damn “L” hadn’t gone out.  We were getting more than a few phone calls along the lines of:  “Hello?  Is this the looovvvee boat?”


Late Saturday afternoon, as we stood there on the roof of the hotel examining that damn sign, the General Manager suddenly pointed at the water seven floors below and asked, “What the hell is that?”


There was a hundred foot long red lumpy oil slick floating out from underneath the hotel.  And there were strange little yellow dots in the red slick.  “I think,” I said, “that is about 2000 pounds of crawdads mixed with a few hundred ears of corn.”


The chef had decided to destroy the evidence of his culinary stupidity by walking out onto the loading dock and dumping the unsold crawdads, both living and boiled, into the bay.  I suspect the chef did not know that the crawdads would float.  Still, he probably would have gotten away with this subterfuge if the tide hadn’t been coming in.  The crawdads began washing up onto the beach below the pier.


Almost immediately, we began receiving phone calls from guests concerned about the strange mess on the beach.  “Don’t worry,” the front desk lied.  “This is a marvelous opportunity for you to observe a rare natural event.  Red tides only occur once or twice a year.”


The General Manager and I were both elated and terrified.  We were elated because the chef was toast.  He had cooked his last meal.  Terrified because at any minute we were going to get a phone call from the Health Department.  You can’t dump a ton of fresh water crustaceans into the bay without somebody noticing.


Actually, it turned out we could.  Maybe it was because it was Labor Day weekend.  Maybe it was because the sun set only a few hours later and everyone was staring at that damn sign.  Whatever the reason, we got away with it.  By morning, most of the evidence was gone.  What happened to it?  Well, about midnight, I took a flashlight and went down the stairs from the end of the pier and walked out onto the narrow beach under the hotel.


That beach was alive, but not with crawdads.  There was a constant clicking and snapping noise.  As I moved the flashlight back and forth, I could see an army of sea gulls, crabs, and rats devouring everything.  Everywhere I looked, all I could see were teeth and eyes illuminated by my flashlight.  It was a sight that Dante could have used for a new level of Hell.  By morning, the tide going back out removed most of the remaining evidence.


As it turned out, Cajun night was popular after all.