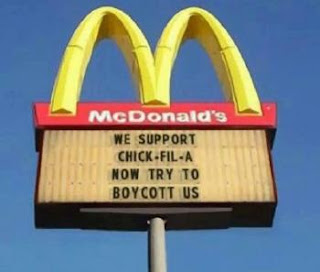 And a peaceful colleague of mine, a woman who is probably incapable of any physical violence, is publicly hoping that the people who eat at that restaurant die from arteries choked with chicken fat.  This is a warm-hearted individual whom I respect, and while I know she doesn’t really mean this, it shows the level the rhetoric has reached.

The problem, of course, is not the food, but that the president of the company has a narrow interpretation of what constitutes a marriage.  This angers the more “open-minded” people so much that they are staging protests and boycotts in front of the franchise owners' property until the corporate president agrees with them.  People who agree with the company president and wish to show support are force-feeding themselves chicken in the name of God.

If I am supposed to choose between these two positions, I pass.  I don’t eat at that restaurant very often as I don’t like the food that much and I don’t frequent the mall.  If you want to eat there, that is fine with me.  If you don’t want to eat there, then it is like the advice I gave my maiden aunt: “Let them that don’t want none have memories of not getting any.”  The president of the company is allowed to have his opinions and make up his own mind (tiny though it obviously is).

Since neither side will settle this argument with the time-honored tradition of pulling a wishbone apart, I have a suggestion:

Why don’t we just ignore what other people do as long as it doesn’t abuse children or bother me?  I am particularly interested in the latter.  Let's all agree:  the people who are against gay marriage will not be forced to participate in one.  I can just hear the arguments now:

“But if we allow gay marriage, somebody will want polygamy or will want to marry a horse.”  I really don’t care.  How many consenting adults have to have a polygamous relationships with farm animals in order for the polar ice caps to melt?  Until we reach that number, I do not care.  I have owned horses and spent more time than I care to admit with livestock (platonically, of course).  When it comes to livestock, as long as you own it, I don’t care if you marry it or kill it with a power sander.

“But my religion is against it.”  Read your bible.  Your bible—and every other version of the bible—is against every damn thing.  The Old Testament will freely allow me to sell my sister into slavery, stone most women, and smite parking violators.  If we strictly followed the words of just the King James Bible, there wouldn’t be enough people left on this planet to play bridge.

Personally, if I had spent my whole life waiting for a direct personal message from God, I would be a little disappointed if it turned out to be nothing more than, "Eat mor Chikin."

And this whole religious argument could be nothing more that an accidental misreading of the bible.  If you will consult Mark 11: 13-14, you will see it is  FIGS that God hates.

“But marriage is about taking care of children.”  The Doc and I are finished having children, but I’m reasonably sure we are sticking together.  When the preacher said, “Til death do you part,” little did we know we were setting a goal.  And we continue to call this a marriage.  If marriage were really just about raising children, wouldn’t a partnership with multiple partners provide for more stability for the family, anyway?

Robert Heinlein, in The Moon Is a Harsh Mistress, described a linear marriage: a pairing where the collective marriage added a new spouse every few years, alternating the sex of the new partner.  Over time, the marriage would acquire property and wealth, care for aging spouses, and be the most stable possible home for the children.  If marriage were only about caring for children, this might be the only permissible form of marriage.

“But this violates my freedom of religion.”  If that’s so, don’t participate.  There are seven billion people on this planet, and the overwhelming majority of them have a different imaginary friend than you do.  If your religion is against something, odds are that somebody else is worshipping a sentient mailbox who commands them to do just the opposite.  And I don’t care what either of you do--just leave me (and each other) alone.

The famous English actress, Mrs. Pat (Beatrice) Campbell once said, “My dear, I don’t care what people do as long as they don’t do it in the street and frighten the horses.”  While this may have been excellent advice 100 years ago, it is irrelevant today—there aren’t that many horses on the street.    As far as I’m concerned, go ahead and do it in the street, just stay close to the curb so as not to block traffic.  My pickup has seen worse.