Professor Ken and The Coach were riding a bicycle built for two.  Now, this is much harder work than you might think--for a bike to support the weight of two grown men, the structural integrity of the frame requires a great deal of additional reinforcement.  Including passengers, we are talking about a quarter of a ton precariously balanced on two wheels.

"Yeah," agreed The Coach.  "If I hadn't been holding the brakes all the way up, we probably would have rolled backwards down the hill."

This seems to be the purpose of the Athletic Department at most universities.  At any given point, they are working overtime trying to figure out a way to cancel out everything the rest of the university is striving to achieve.   This week, with a record fine being assessed against Penn State in the wake of the Paterno/Sandusky affair, perhaps it is time to consider a period of what I would call “Football Reconstruction”.

It is a common misconception that Reconstruction following the American Civil War was about rebuilding the factories, homes, and infrastructure of the South that had been damaged during the war.   Towns such as Atlanta and Richmond certainly needed a little more than a new coat of paint, but Reconstruction actually refers to rebuilding the society of the South in such a way that slavery would be impossible.

How many scandals have we had in…oh…the last 30 years involving football corrupting the educational process?  How would we possibly ever know?  The first stage is always carefully hiding the facts to try to protect the football program.  About twenty years ago, a university about 200 miles away had a scandal when the coach and university administrators tried unsuccessfully to convince a young woman not to report that she had been raped.  If you do a Google search for “Athletic Department Cover-up Scandal” you will get over two million hits.  For some reason, there are no hits for “Physics Department Recruiting Scandal”.

As bad as they are, scandals like that are not the worst crimes being committed at our universities by run-amuck athletic programs.  The real crimes are what we are doing to the student athletes.  We bring inner city children to the university and then systematically deny them a real chance at an education.  Can you imagine the societal uproar if we created a permanent class of athletes and then refused to allow them to learn how to read?  Actually, that is exactly what we are already doing.

Mark Twain once said that “The man who doesn’t read good books has no advantage over the man who can’t read them.”  We bring students in from all over the country, pretending to educate them while actually physically abusing them for our entertainment.  I can think of very few things that are as cruel.

Do you remember the Len Bias case?  It has been 26 years now, but Mr. Bias is still considered the greatest basketball player to never play in the NBA.  He died of a cocaine overdose during his senior year just two days after being drafted by the Boston Celtics.  When he died, he was 21 credits short of graduation—almost a full year of classes--yet had used up all four years of athletic eligibility.  He had not attended a class in months, and was said to be incapable of writing an essay as simple as completing four simple sentences about a bunny rabbit. 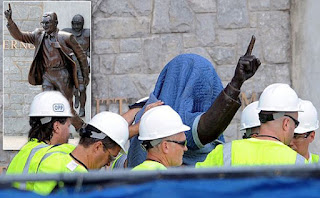 Has the situation changed markedly since the death of Len Bias?  Recent events now indicate otherwise.  I find it deeply disturbing that so many people miss the whole point of the travesty at Penn State.  Sandusky was a sick pedophile.  Paterno was much, much worse; he pimped out children for years just for the sake of an athletic program's reputation.  I would think better of the man if he had done it for money.

It is not enough to simply remove the statue of Parterno.  We need to reconstruct the culture of universities so that the emphasis is placed on academics and a Sandusky/Paterno or a Len Bias case would never again be possible.  We should never hear of a school transferring desperately needed funds from academics to athletics.  We should be far more interested in the student than the athlete.

To be fair, our country failed at Reconstruction in the South following the Civil War.  At best, we made a commitment to finish the job at a later date. It was almost a hundred years before we made a concerted effort to uphold that promise, and the job is still not finished.  When it comes to Football Reconstruction, we haven’t even yet made the promise.