Recently, I taught a class on the history of Spain.  Early in the semester, the class covered the Roman period, and among the topics we discussed were the food and drink of the Romans.  One student, a little more adventurous than most, decided to make garum.  For the Carthaginians among you, garum was a sauce that the Romans used on their food.  As a Texan uses Tabasco sauce, the Romans used garum.  The sauce is made chiefly of fermented anchovies, and is probably the great-grandfather of Worcestershire sauce.

If the class had been in Italy, my student could have purchased the sauce ready-made.  In New Mexico, she probably could find fifty different kinds of hot sauce, but garum is just not for sale.  She found all the ingredients, followed the recipe….and it didn’t turn out well.  It may be hard to get something to ferment in an environment with no more than ten percent humidity.  I had pretty much the same problem in reverse while I lived in Galveston.  If you are trying to make beef jerky while living a block from the beach, you may have to wait a few decades for the meat to dry. 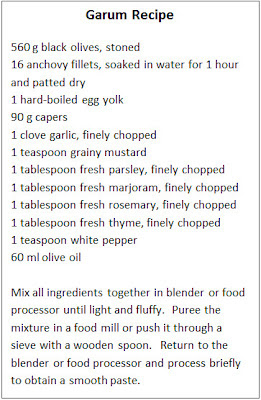 In any case, my student did not produce a two thousand year old condiment.  She did produce something that was halfway between a mobile hazmat super-fund site and a substance that the United Nations would send people in blue helmets to inspect.  That bottle was sealed, wrapped in aluminum foil, and inside multiple plastic bags--and the odor could still gag a maggot off a meat wagon.  This was a stench that made you see dark colors and made you think of creatures that live under rocks.

As my student gave me the sample she was just about in tears.  From her story, the damage to her house bordered on permanent.  Supposedly, the only good thing about the experiment was that the house no longer had an ant problem.

My whole family could sympathize—but at my house we refer to it as the root beer episode.  I am still surprised that you can make root beer without a license.

Actually, to make root beer all you need to do is go to the grocery store.  You need root beer extract, sugar, yeast, and a hell of a lot of empty bottles.  It also helps to have an indulgent wife.    Making the root beer is simple: mix it all up, bottle it, cap it securely, and wait a few weeks for the yeast to ferment.  I made several batches and the boys really enjoyed them.

The last batch…well, I’m still not sure what when wrong.  The bottles had been stored in an empty kitchen cabinet for weeks when one of the bottles started leaking.  I took all the bottles out of the cabinet, washed them off, and left them stacked on their side in the double kitchen sink.  Then the whole family left for a movie.  The house wasn’t the same when we came back.

The first clue was the absence of cats.  My wife has two—otherwise known as the crazy cat lady starter kit.  The cats always meet us at the door in the hopes that we are bringing more cat food.  That day, no cats—either at the front door or anywhere near the front of the house.  We didn’t find the furry cowards for hours.

As best as we could recreate the events of the disaster, one of the bottles on the bottom of the pile exploded from the pressure.  This detonation took out all the other bottles in an uncontrolled chain reaction the likes of which had not seen in New Mexico since 1945.  The destruction at ground zero was impressive.  Besides bathing the entire kitchen in a fine and sticky mist of root beer, it took out the ceiling light, and scattered glass all the way across both the dining and living rooms.  Scattered might not be the correct word—blasted is more to the point.  Some shards could not be pulled out of the walls or ceiling even with pliers.  In several places I plastered over the glass and covered it with paint.

If you know where to look, the wooden paneling in the living room still has a piece embedded next to the window.

There must be some lecture where I can work in a discussion of root beer—I’m just dying for one of my students recreate this experiment.  It has to be a student--my wife and cats won’t let me.