San Antonio, one of my favorite places in Texas, is huge.  Somehow, that sleepy little mission town in Texas grew to the eighth largest city in the US.  The center of the town is built around the old Alamo, and nearby is the Riverwalk.  I like the way the San Antonio River meanders around downtown like a toddler playing in a parent's office.  In particular, I like the Menger Hotel.

Like a lot of good stories (including this blog) the hotel got its start because of beer.  William Menger was born in Hessen, Germany and migrated to Texas along with a wave of other German settlers.  If you find anything in Texas over a hundred years old and it's still standing, chances are that it was built by Germans.  William landed in Galveston and spent six weeks by wagon train traveling to San Antonio.  I've traveled that same distance in three hours by car.

By trade, William Menger was a cooper--a barrel maker--a good profession in a frontier town.  It didn't take Bill (as he was called in Texas) long to marry a good German girl and start a business.  He imported hops and malt from New York and soon the people of Texas could buy Menger beer by the barrel.  Two years later, Bill and his wife opened a tavern for the customers who wanted to buy beer by the stein and not by the barrel.  That beer must have been rather strong, for it didn't take too long for the Mengers to realize that some of their customers needed a place to spend the night.

Their hotel is old--it was built in 1859, just 23 years after the Alamo battle.  The first guests of the hotel could cross the street and wander the ruins of the old adobe mission and still smell the acrid burnt gunpowder. 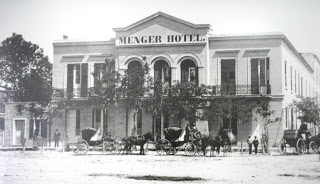 The hotel immediately was a great success--and it became the place to stay if you were in Texas.  Sam Houston, Ulysses Grant, Phil Sheridan, William Tecumseh Sherman, and Robert E. Lee all stayed in the hotel.  According to Menger family legend, Lee rode Traveler into the lobby of the hotel, scooped up Bill Menger's daughter and gave her a gold necklace.  While it might be hard to imagine the stately General Lee riding his  horse into a hotel, the Menger family still has the gold necklace.  Who knows?  Lee was only a Lt. Colonel at the time, maybe he was a little wilder before the war.

Menger got rich running that hotel and eventually he took his wife on holiday to Europe.  While there, he watched a modern fire department battle a house fire using a modern pumper truck.  When Bill returned to Texas, he brought a pumper with him--the first in the state.   Naturally, the device was named 'The Alamo,'

For years, the hotel was the center of Texas society.  Lily Langtry stayed at the hotel, as did Buffalo Bill Cody, and Annie Oakley.  William Sydney Porter--better known as O. Henry--wrote several of his short stories while staying in the hotel, and he mentioned the hotel in several others.  Unfortunately, Porter had to depart the hotel in a hurry--he fled to South America to temporarily avoid being arrested for embezzling.  Porter wasn't the only thief to stay at the hotel; it was home--at least temporarily--to Butch Cassidy, the Sundance Kid, News Carver, Ben "The Tall Texan" Kilpatrick, and Frank James.

The hotel predates the nearby military base, so Patton, Doolittle, and Pershing all stayed there.  Colonel Tommy Tompkins, the legendary leader of the Seventh Cavalry, lived in the hotel for years.  According to legend, Bill Menger helped pick the site for Fort Sam Houston.

Many presidents have signed the register, including Eisenhower, Woodrow Wilson, and Benjamin Harrison.  (This is, of course, if Benjamin Harrison ever actually existed.)  The hotel arranged a parade for President Harrison, and when he was delayed, the hotel went ahead and held the parade without him!  That's not much of a parade--but then Harrison wasn't much of a president. 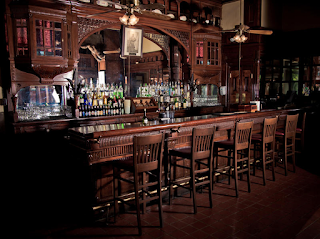 There is one President who will forever linked be to the Menger:  Theodore Roosevelt.  In 1898, at the beginning of the Spanish American War, Teddy used the bar of the Menger as the recruiting headquarters for the famous Rough Riders.  The bar had just been remodeled in mahogany and the finest crystal glasses had been obtained.  Ice was shipped in from Boston and the specialty of the house was a chilled mint julep served in a frosted sterling silver goblet.  Seven years later, Teddy and the boys staged a reunion in the bar.

The hotel has an extraordinary list of ghosts that haunt it and all the usual stories of wild parties through the years.  One dusty cowboy came in off the trail and refreshed himself by filling a bathtub with champagne.  Another guest checked in with his pet alligator, but when he checked out he was short the cash to pay his bill.  He left his pet as collateral, and Bill (the gator was named after the hotel's founder) lived in the hotel garden outside the bar for the next fifty years. 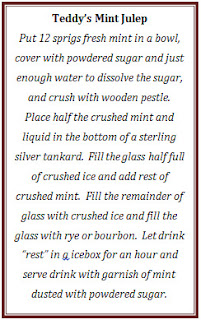 Carrie Nation, the famous prohibitionist, never stayed in the hotel, but she used to yell in the bar a lot, though thankfully she did not bring her famous hatchett.   Eventually, the bar had to close during Prohibition, but luckily, the owners were willing to bet that the ban on liquor wouldn't last forever, so the bar was carefully packed away.  Every glass and goblet was preserved, and eventually the bar was able to open up again.  Presumably, Bill the Gator waited patiently in his pond.

The Duke wasn't the only person who drank in that bar.  In February 1974, my wife and I spent our honeymoon at the Menger. Eventually, I made it down to the mahogany bar and ordered that mint julep.  They served it to me in a frosted silver goblet, just the way Teddy would have wanted one.