A man was driving down a country road one day when he happened to glance in the rear view mirror.  There was a chicken running down the road as fast as greased lightning.  In no time at all, the chicken caught up with the car and began to actually pass it!

The man glanced down at the speedometer and couldn't believe his eyes.  He was driving at 35 miles an hour, and was about to be passed by a chicken!  Even more amazing, as the feathered fury began to pass him, he was startled to see that the bird had three legs! 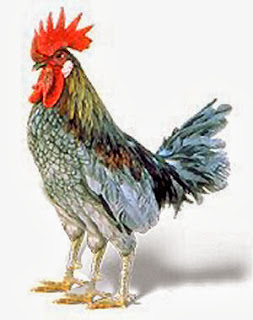 Fascinated, he sped up and stayed right behind the rapid rooster and followed him to a lonely farm house.  As he pulled to a stop, he saw a farmer standing near the chicken coop.

"Is that amazing bird yours?", he asked.

"Yep." said the farmer.  "Been cross-breeding them for years."

The farmer took off his hat, leaned back against the chicken coop as he scratched the back of his head and said, "Well...  I like the drumstick best and so does Ma.  Then Junior came along and he wants a drumstick, too.
Three-legged chickens just seemed the easiest way."

The man was impressed.  "How do they taste?", he asked.

The farmer put his hat back on his head, stood tall, and looked the man straight in the eye.  "Wouldn't rightly know." he said.  "Ain't caught one yet."

Enema U has lost a whole bunch more football games.  So many that we have become something of a national joke on television.  Earlier in the year, one of our regents wrote a letter to the local paper stating that it was through football that the university would establish a "brand".  It turns out that he was right--we have established a brand.  We are somewhere between the Exxon Valdez and Lehman Brothers, with a small dash of Lindsey Lohan.

God knows we can't blame the athletes--they didn't schedule three "blood" games in one season.  They aren't the ones who transfer over $4 million a year from Academics to supplement an already bloated athletic budget.  And they aren't the ones who have decided to start offering cash incentives to bribe students into a stadium they clearly want to avoid--despite receiving free tickets.

Academics versus athletics is an old argument.  (Is it actually an argument when you have to repeat simple truths endlessly to idiots, in the futile hope that eventually they will understand?)

No--Just for a moment, let's try to see this discussion from the regent's point of view. Let us pretend that we finally caught the fast fowl and that Enema U had a winning season.  Now what?

It won't make us any money.  The program wouldn't show a profit even if every seat in the stands were full and every fan had someone sitting in his (or her) lap.  Do the math: The stadium holds 30,000 people, the tickets cost $20, and we have--at most--eight home games.    After the 15,000 students get in for free, you still don't fully fund the football program.  (Regents?  If this is confusing, print it out and take it to your next book burning.  Maybe someone can help you with the big words.)

If the team suddenly starts winning, the regents won't want to cut the funding--meaning that most of the academic departments will continue their efforts to be sponsored by fly-covered children in Africa.  The laws of athletic funding are simple: When they lose--they need more money.  When they win--they deserve more funding.

Will university enrollment go up if we start winning?  The regents obviously think so, but if this is true, what attracts the students we have now?  If our current students enrolled at Enema U for its current team--they have to be idiots.  If we start winning, will we lose our base?  What kind of student picks a university based on its football team anyway?

Will a winning season mean the library once again can subscribe to the missing journals that we need?  Will there suddenly be enough classrooms?  Can we afford to hire enough faculty?  Just exactly what will change at Enema U if we suddenly have a vibrant football season?

I understand that our university president remembers college athletics from the days when cars had fins, televisions were black and white, mothers stayed home with the kids, and our president spent most of his time on the golf course.  Times have changed and only the last item is still true.  It is okay if the university changes too.  Quit trying to catch the chicken!

Here's a suggestion:  Why don't we try to make everyone happy?  If we drop down a division, Enema U would win more games, it would cost a hell of a lot less, and the team would consist of more locals--a move that would guarantee more community support.  This small change would guarantee that everyone would be happy.  The regents could continue to relive a past that probably never was and the rest of the school could afford to stop holding bake sales to fund research.


We could make everyone happy.  Kind of reminds me of a veterinarian we used to have back home.  He was a pretty good animal doc and an even better taxidermist.  It was always kind of reassuring that no matter what, you were gonna' get your dog back.
Posted by Mark Milliorn at 12:01 AM