All Quiet On the Brazos

The cowboy stopped the bay on the point of land where he could overlook the Brazos River 400 feet below. He leaned back on the saddle and let the horse nibble on the small mound of grass available.  Tight-lipped, the cowboy smiled wryly at this; he knew the horse wouldn't find much, as he could see from the droppings that the Barbary Sheep had already grazed the grass on the point fairly well.  The grass would eventually grow back quickly, but not until the next rain--and the drought in that part of Texas showed no sign of ending anytime soon.

Slowly he lifted himself up from the saddle and swung his right leg back and down off the horse.  Throwing the leather stirrup across the seat of the
saddle, he once again tightened the old leather cinch of the saddle.  He was 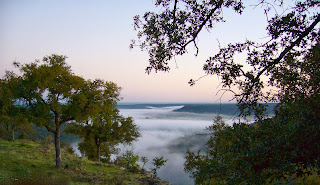 very much afraid that the saddle was soon going to have to be replaced--the saddle was almost as old as he was and for over the last ten years he had spent as much money having the saddle repaired as it would have cost to buy a new one.

As the cowboy looked over the stained leather, he was torn between the desire not to desert an old friend and the nagging little voice somewhere in the back of his head that kept telling him an awful truth, that the saddle tree--the frame of the saddle--was cracked and could not reasonably be repaired.  Pushing gently on the cantle, he could feel the tree move more than it should.  As much as he disliked the idea, it was time to buy a new saddle.

His son Matt was after him to get one of those new Australian stock saddles.  They were light, they were comfortable, they were easier to clean, and they were much easier on the horse.  All of that was true, but the cowboy could not forget that they were also made of ballistic nylon!  A plastic saddle!  There was no denying the fact that in almost every way, the new saddle was better than the old-style saddle he was using, but the very idea of a plastic saddle left him cold.  His son had told him that some of the saddles could even be cleaned by putting them into a washing machine!  Somehow, the very idea made the prospect of a new saddle so much worse.

The cowboy shook his head and made a decision, he might buy a new saddle, but it would damn sure not be a plastic one.  What was the point of owning a saddle if you couldn't take pride in oiling the seams and working the thick opaque saddle soap deep into the leather?  How could you ever take any pride in maintaining a saddle if all a man had to do was take it out of a washing machine to hang it up and let it dry?

The cowboy swung back up into the saddle, heard the leather creak and knew that tightening the cinch had produced little improvement in the fit of the saddle.  Over time, it would just widen the crack in the saddle tree and hasten the saddle's destruction.  If he didn't watch out, he might go down the side of that cliff faster than one of the damn sheep! 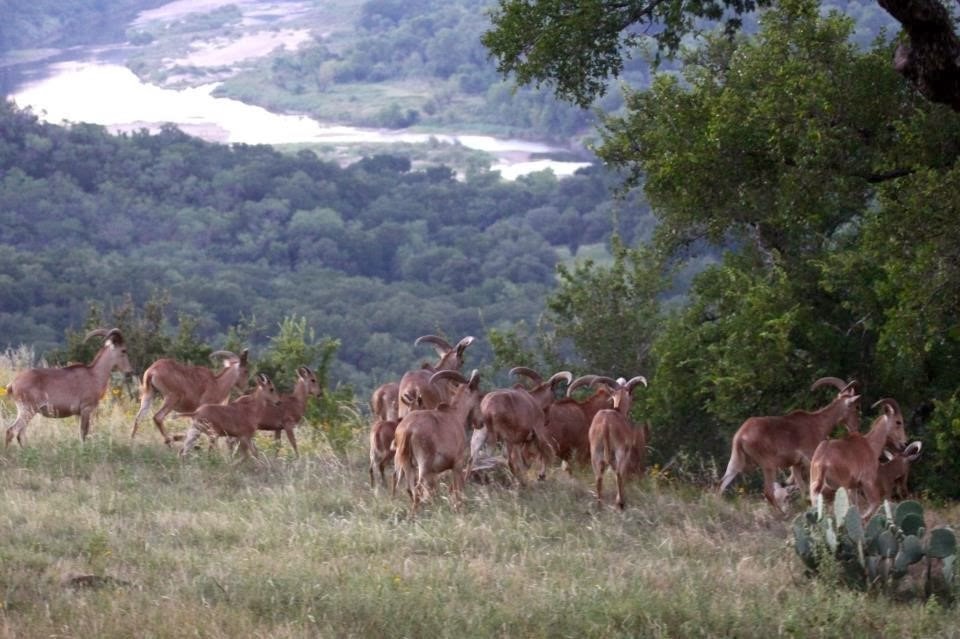 Making his way carefully, he rode along the edge of the cliff that made up the north edge of the point.  It never failed to amaze him that the Barbary Sheep could run up and down the sides of the cliff as if it were flat land.  He doubted he could have made his way down the cliff in less than an hour, and even then he was fairly sure he would slip and fall before he could reach the bottom.

While it was pleasant, the early morning ride in the cold crisp air did have a purpose: the cowboy was checking the five hog traps spaced evenly along the points of land overlooking the river.  The whole state was being overrun with feral pigs and his traps usually caught a few each week.  If he found one, he would dispatch it with the Colt revolver he wore on his hip.  He always felt a little foolish putting the holster on--like he was trying to imitate his childhood hero, Hopalong Cassidy--but he also knew the hogs were too intelligent to leave in the metal traps for long, since they would eventually either escape or damage the trap in the attempt.

The cowboy found the first trap--empty.  The mound of dried corn kernels he had poured out the night before were undisturbed.  He rode past the trap a little way out onto the narrow point of land.  This point had one of the best views of the river on the ranch and the cowboy hoped that someday Matt would build a house here for his family.  That probably wouldn't happen anytime soon, as Matt worked in Fort Worth and barely made it out to the ranch once a month.

The cowboy sat there awhile, watching  the cold mist on the river  below.  Damn--a cigarette would be good right now.  The cowboy hadn't smoked in twenty years, but every now and then the fierce urge still hit him.  A cigarette on a cold morning was surely one of life's pleasures.  Staring at the burning ember on the tip of a cigarette helped a man to think!  It focused his attention, drew him out of the world and allowed him to become immersed in his own thoughts.

Disgusted, the cowboy reached into his pocket and removed his cell phone.  The number told him it was his doctor's office--they undoubtedly wanted to confirm his appointment for the next day.  Ignoring the call, he held the red button down with a gloved thumb until the phone turned off.  Staring down into the palm of his hand, he thought, "More damn plastic!"

Having a cell phone was almost as bad as giving up cigarettes.  How in the Sam Hill does a man have any time to think?  Lately, Sergio, his hired hand, had been sporting a pair of headphones so he could listen to music out of his “walking pod thing” while he worked.  Every car and truck on the property had a radio, the house had a television or a computer screen in almost every room--and he had noticed that lately his wife was carrying that pad computer of hers into the few rooms that didn't.

It seemed that there was no such thing left as solitude.  Every minute of the day, the cowboy thought, he was surrounded by machines that just would not shut up.  Machines that blared the news, music, or talk--machines that seemed to fill the day with information, but no thinking.  The day was so full of noise there was no time left to think

Sadly, the cowboy mashed the small green button with his calloused thumb until the gray plastic phone came back to life.  If he didn't, sure as hell his 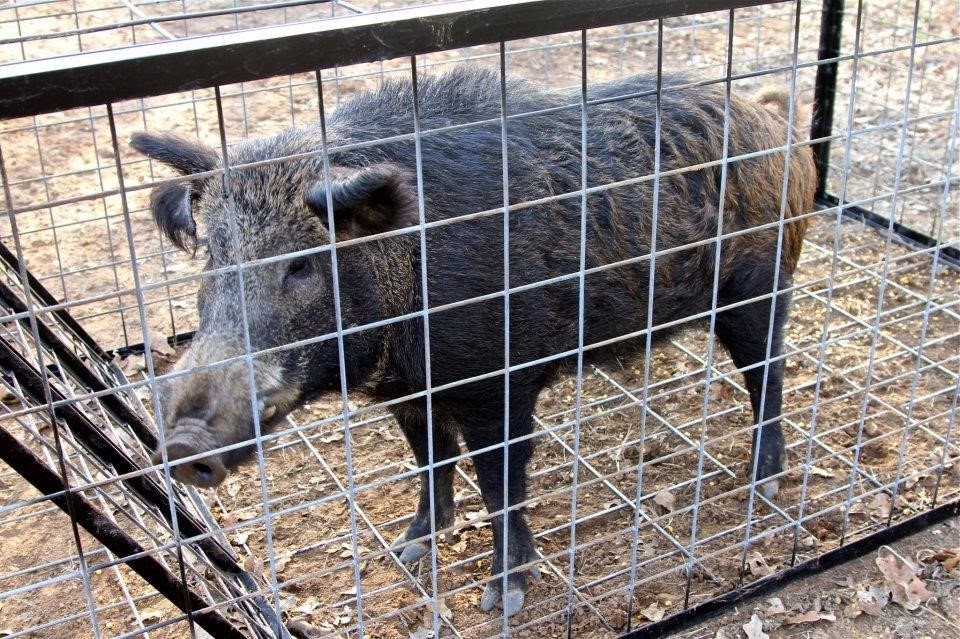 wife would call and panic when he didn't answer.  As the cowboy stared at his electronic leash, he thought to himself, "If I had any brains, I'd prop this gizmo up on a rock and use it for target practice."

Just what was so dad-blame important that he had to carry a phone, anyways?  It seemed half the conversations he had on the damn phone were a waste of time.   The people with the least to say took the longest to say it.

The cowboy looked up at the sky and watched a turkey buzzard make slow circles in the sky.  He thought to himself, "A dozen years ago when I didn't carry this damn phone, I don't remember missing anything important.  Hell, the only news I ever get is bad."  Thinking back over the years, the cowboy supposed the trouble had started when his wife talked him into buying an answering machine.  As far as he could remember, that damn device had never given him any good news, either.

A few minutes later, as the cowboy followed the trail along the cliff to the next point of land, he marveled at the silence.  He could hear the wind blowing through the few remaining leaves of the live oak trees, the steady breathing of his horse, and from far away the rhythmic rusty squeak of his windmill and the slap of the pump rod.  "Have to do something about that." he thought.  "Need to get Sergio to climb up there and grease that before it gets so cold his hands freeze-stick to the ladder."

What the cowboy did not hear was the shrill call of his cell phone!  Several hundred yards behind him, the phone was steadily ringing, half-buried in the corn kernels inside the hog trap.