Since I wrote about Worcestershire Sauce last week, it seems only fitting that I finish the conversation and discuss the history of Tabasco Sauce.

Where Worcestershire Sauce was a legacy of the Roman Empire, Tabasco Sauce actually got its start from several American wars and an Irish immigrant named Maunsel White.  White came to America at the age of 13 and settled in Louisiana.  Most of his early history is lost, but he seems to have drifted into the local militia (like a lot of immigrants did), and by 1814, he was a captain in the militia, reporting directly to General Andrew Jackson.  He also participated in the last great battle of the War of 1812: the Battle of New Orleans. 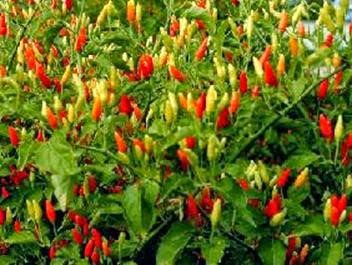 By the time the war was over, White--now a Colonel--had excellent business and political connections in New Orleans and the surrounding countryside.  He started a bank, bought a sugar plantation, and generally prospered.

Following the Mexican-American War, soldiers returning from the invasion of Mexico arrived in port at New Orleans.  One of these returning soldiers gave White the seeds to a fiery red pepper.  There are differing stories about how the plants came to be called “Tabasco Pepper” but it is possible that the name was simply picked at random from a map of Mexico.  However the name came about, by 1850, the New Orleans Daily Delta published an article stating that “Col. White has introduced the celebrated Tobasco (sic) red pepper, the very strongest of all peppers, of which he cultivated a large quantity with the view of supplying his neighbors, and diffusing it throughout the state.”

White was even making a 'pepper sauce' and bottling it, but he considered the concoction to be a remedy for cholera.  Other people must have enjoyed his sauce, because several old recipes mention it.  As late as 1879, a riverboat’s dining menu listed the sauces available for patrons of their dining room.  Just below “Lea and Perrin Sauces” is a mention of something called “Maunsel White.”  This sauce was manufactured for over 20 years, but seems to have stopped production somewhere before 1900.

White's sauce was neither prepared like nor tasted like the present Tabasco Sauce, but one of his neighbors and a fellow banker was a man by the name of Edmund McIlhenny.  As a banker, McIlhenny had heavily invested his bank’s bonds in Confederate War Bonds, then had retired to Avery Island, a plantation owned by his wife’s family.  Avery Island is located over a salt dome and during the Civil War, salt became a valuable commodity, so when the Union Army seized the island, the McIlhenny family fled to Texas--unable to profit from it.

When the war was over, McIlhenny was financially ruined: the plantation was wrecked, his bank was gone, and his war bonds were worthless.  (Really worthless!  If you believe the House of Romanov will rise again and cast the likes of Putin out of the Kremlin, you can still buy bonds, issued by the Czar—at greatly reduced prices, of course.  There are exchanges that will still sell such junk.  You can even buy bonds issued by the German Kaiser.  But it is illegal to trade in Civil War bonds or currencies for anything other than as an antique curiosity.  The South ain’t gonna’ rise again!) 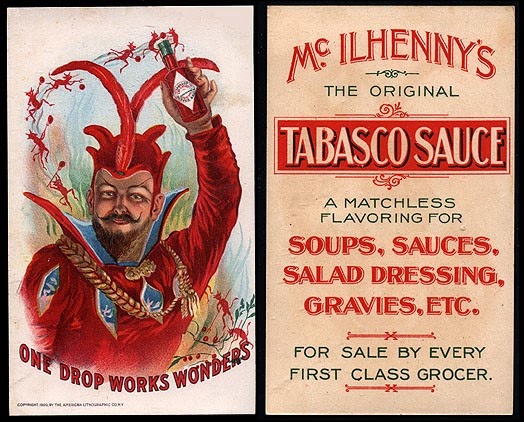 What McIlhenny did have, however, was a warehouse full of empty perfume bottles, an island full of salt, a few acres of pepper plants, and a wrecked sugar cane plantation.  However, the ingredients of Tabasco Sauce are fairly simple: pepper juice, salt, and vinegar.  (McIlhenny made his vinegar out of fermented sugar cane juice.)  His first commercial sale, bottled in those little cologne bottles, was in 1869.

The sauce was a success, of course.  The McIlhenny Company is still owned by the descendants of Edmund McIlhenny, and Tabasco still has only three main ingredients.

Like Worcestershire Sauce, the military has taken Tabasco Pepper Sauce around the world.  In 1898, Lord Horatio Herbert Kitchener’s troops took it with them on the British invasion of Khartoum in the Sudan.  That same year, McIlhenny's son--the second president of the company--left his job to join Teddy Roosevelt's Rough Riders and took the fiery red sauce to Cuba.
When the US military decided to end the border depredations of Pancho Villa, General Blackjack Pershing's Punitive Expedition took it along on the 1916 invasion of Mexico.  Tabasco was present in both World Wars, in Vietnam, and is currently issued inside of military MRE rations.   Recognizing the simple necessity of the sauce, both England and Canada now issue Tabasco in their military rations. 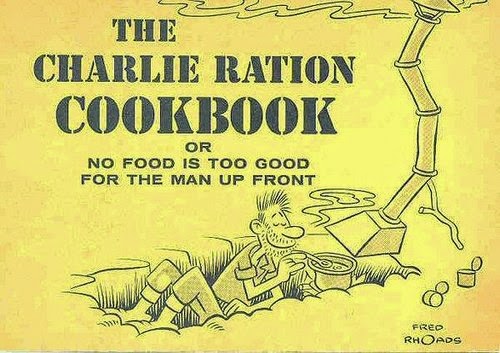 During the Vietnam War, Brigadier General Walter S. McIlhenny issued the Charlie Ration Cookbook.  The small booklet came wrapped around a 2-ounce bottle of Tabasco and taught soldiers how to make a C-ration almost edible.  Among the recipes were Combat Canapés, Cease Fire Casserole, and Breast of Chicken under Bullets.

Tabasco has been everywhere!  It is served on Air Force One in special bottles, it was standard issue on the space shuttles, and it has been to both Skylab and the International Space Station.  It can also be seen in the Charlie Chaplin movie, Modern Times and it is already listed on the prototype menu for the first Mars trip.

A hundred years from now, I have no idea where people will have ventured.  But, I'm willing to bet they take Tabasco with them.
Posted by Mark Milliorn at 12:01 AM