To Say Nothing of the Dog

It was a nice study, with just enough bookcases to seem full, but just enough space for a large comfortable leather chair where one might sit next to the excellent reading lamp and enjoy a favorite book for the umpteenth time.

That was exactly what the man in chair was doing:  once again reading Three Men In a Boat.  This was as it should be...as the man knew...as you should know: that Jerome K. Jerome’s masterpiece is the single best repository of knowledge concerning the human condition.  The man was just getting to the part where the three men had discovered that they had forgotten a can opener when his son came into the room.

The man did not look up from his book--he was at one of his favorite passages, where the men tried to use a knife to open a can of pineapple. 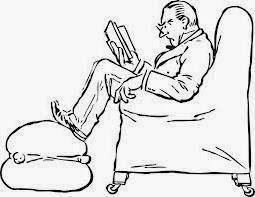 Regretfully, the man carefully put down his book.  He really didn’t need a bookmark to find his place because the book was a well-read gift from his wife.   It was the Bristol edition and was in good shape for something 125 years old.

The man looked at his son and he could tell by his son’s face that he was indeed, serious.  “Ahh, the teenage years,” the man thought.  “One existential crisis after another.  Why are we here?  What is the meaning of life?  I haven’t been able to answer a single question since he asked me to explain the designated hitter rule.”

“Are you thinking of getting married?” the man asked.

“Well,” the man answered.  “Depending on how you do it, it can be very expensive or quite cheap.  I think your mother and I spent about $300 on ours.  We got married in my parents’ living room.  And I’ve been to weddings that cost over a hundred times as much.  Either way, you are just as married.  It’s sort of like being on an escalator: no matter how fast or slow you walk, you end up in the same place.”

“The whole purpose of the ceremony is a public profession of marriage.   The two of you are professing your love and making a public commitment to the marriage.  You invite friends and family to be witnesses and to ask their assistance in helping you keep the marriage.  Does any of this make any sense?”

“But let me answer the question I think you are really asking,” continued the man.  “A lot of people seem to believe if you marry the girl you love, you will never have any problems.  What nonsense!  I remember when your mother and I were dating, there was this silly movie called ‘Love Story.’  There was a line in the movie that everyone repeated for years:  ‘Love means never having to say you’re sorry.’  Which is horseshit!  Love means constantly saying you’re sorry, and meaning it.”

“Mom says you were thrown out of that movie.”

“Mom says that you take everything and twist it to your advantage.”

“You want to know what a marriage cost?  You will spend a lifetime making payments together.  Marriage is always making sure that your partner’s needs come first.  Marriage is understanding that everything is your job.  Marriage is holding her hair when she is sick.  Marriage is trying to make sure she eats the last piece of pizza even when she insists that it is yours.“

“You don’t make marriage sound like it is worth the trouble.”

“I’ve always thought it was.  It is only through living with your mother that I have really become happy.  Take this book, Three Men in a Boat—“

“I don’t want to read it.  I tried it and it’s boring,” the boy interrupted.

“When you are older, and not young enough to know everything, you may change your mind.  No--I just wanted to point out that Jerome wrote this book immediately after he returned from a honeymoon that he spent with his wife boating on the Thames River.  He had spent his whole life on the river, but only understood it after his marriage.“

The man thought he hadn't done a very good job answering the boy’s question.  “I don’t think he really understands yet, but he has still has lots of time,” he thought to himself.  “We can talk about this again when he is older.  He will understand long before he is ready to marry.   There was still lots of time.”
“Does that answer your question?” the man said out loud.  He was already opening his book back up again.

“Oh, I didn’t really have a question,” the boy said as he turned to leave the room.  “But I think you need to talk to my sister.”