This has been one of those weeks at Enema U, I have spent more time working with people with computer problems than with my students.  I should complain, but Enema U actually pays me more to solve piddling little computer problems than to teach history.  Go figure!
By coincidence, most of the problems this week concerned trying to recover old files from long-dead computers.  Even after the dead had been resurrected, it turned out most of the files were in word processing programs only slightly more advanced than using pointed sticks in clay tablets. 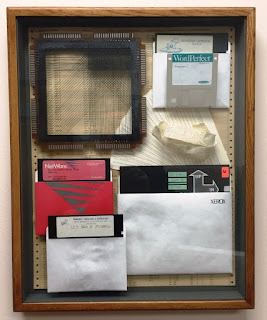 No one ever calls the lab and says, "Hey, I have this old file, so worthless that I haven't read it since disco, and God knows I never bothered to back it up or even print out a copy, but if you have time, it might be fun to look at it.  Can you help me?"


It's always, "Oh my God!  It's an emergency.  My only copy of my manuscript is gonna be lost unless you can help me!  I don't remember what the file was called, and I'm not sure where I saved it on this ancient hard drive, but YOU HAVE TO HELP ME!"
I personally have saved the Great American Novel at least a dozen times.  Not that any of them ever got into print.
Safe copies of one’s work have always been a problem: it is not something new to the digital age.  Even with printed records, how many copies were enough?  Libraries burn, copies can get lost, and paper is fragile.  If paper is your only storage medium, then nothing is permanent.  Most of the books printed in the late 19th and early 20th centuries were printed on paper with such a high acid content, that nowadays, libraries routinely find that precious volumes have turned into faded confetti.  Even today, some publishers print their hardbacks on such poor quality paper that the expected lifetime of the volumes is less than 20 years.
For a guy who is still angry at the Romans' burning of the library at Alexandria, this situation is entirely unacceptable.  Some of the greatest mystery stories ever were those of The Thinking Machine by Jacques Futrelle.  But none of us will ever be able to read all of them, since several unpublished manuscripts went down with the author when the Titanic sank.

You would think that computers would provide some form of remedy, but they actually have made the problem far worse.  For years, every word processing program went out of its way to make sure that every document saved would be compatible with every other word processing format.  Eventually, public pressure created a need for some forms of open format:  ASCII, RTF, and PDF files being the most popular.


NOTE.  When I just happened to mention in passing to my wife, The Doc, the universal knowledge of ASCII (American Standard Code for Information Interchange) she gave me a blank look.  In the twenty-first century, how can anyone NOT understand ASCII?  Incredulous, I asked her, "C'mon!  What is ASCII 65?"
She didn't know!  Wives are weird.
The fact that some documents could be saved in an almost universal format did not solve the problems, since every computer used a different storage system to save the file.   Simply put, a disk from one computer was unreadable to a computer from a rival manufacturer (sometimes, it could not even be transferred between two models of computer from the same manufacturer--how's THAT for planned obsolescence?).  And it has always been this way. 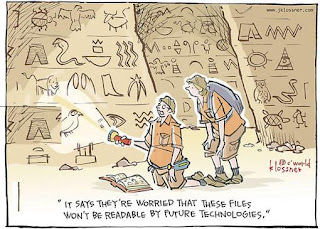 In 1976, manufacturers and programmers met in Kansas City to agree on a standard format for storing data on cassette tapes.  (Yes, before the floppy disk drive became affordable, early computers stored data on cassette tapes...Badly.)  Everyone at the meeting quickly agreed on a standard--the Kansas City Standard.  And then almost all of them went home and developed their own proprietary standards incompatible with the new standard, in the desire to lock in their own customer bases.

At the same time, the hardware itself was changing constantly.  Computer cards were replaced by paper tape, which was replaced by cassette tape, which was in turn replaced by floppy disks that came in a bewildering assortment of both sizes and capacities.  Which holds more data, a single-sided, single formatted 10" diskette or a double-sided, hard-sectored 5.25" inch disk?   Unfortunately, none of them can be relied on to be readable after resting in a file cabinet for a decade.

I once had a lawyer promise to pay me any sum of money I wished if I could resurrect data stored on Mag Cards from a IBM typewriter system from the 1970's.  And for the amount of work it took me, I was still underpaid.  Even IBM didn't have one of those antique systems in its museum.


Zip drives, CD drives, DVD (single and dual layer), Thumb drives, and Blue-ray disks...while the storage capacity of the new drives keeps increasing dramatically, there is almost no backward compatibility.  (And almost no one remembers to copy data from old devices to the new devices).  There is no such thing as permanent storage.  Whether we like it or not, every day the world loses the last copy of something.
The temporary nature of our collected knowledge reminds me of the old Roman practice of the the triumphal parade of a victorious general.  As he guided his chariot through the crowds of cheering citizens, a slave stood on the rear of the chariot, holding a laurel wreath over the general's head while gently whisperer a reminder.