There is a universal military problem:  When the war is over, how do you turn soldiers back into civilians?


This is a tougher problem than you might think.  Young men, skilled only in violence, do not take kindly to being suddenly unemployed during a post-war recession.  In Latin America, at least historically, this situation usually leads to revolutions.  Julius Caesar solved this problem by creating farms for his former soldiers—as far from Rome as possible—in newly conquered territory.  Perhaps this example is what led Australia inadvertently into a war.
After World War I, Australia had a similar problem with returning servicemen and some bright government official decided that the best solution was to turn former soldiers into farmer soldiers.  Over 5,000 farms were created out of barren land in Western Australia—the sort of land where even lizards normally had to pack a lunch to cross:  lands so harsh that only the ruggedly unusual wildlife of the Australian Outback could survive.  Here, the newly-created farmers were to grow wheat!
The government promised subsidies (which never materialized), a growing market for agricultural products (which promptly crashed with the advent of the Great Depression), and price supports (which the government could not afford to pay).  Things were not working out well even before the drought started….but even that paled in significance to the emu problem. 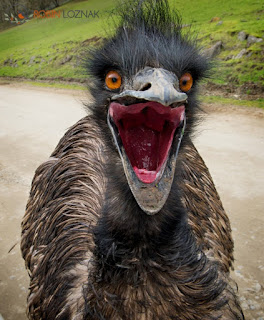 The Australian Emu, locally known as a yallabiddie, is a large flightless bird that almost defies description.  It looks like the result of a drunken one-night stand between Big Bird and a Velociraptor.  Adults can be six feet tall, weigh 120 pounds, and have powerful legs with amazingly sharp claws.  Migratory packs of them soon moved into newly created farm lands.  Roughly 20,000 birds arrived—a ravenous and implacable enemy army.
Some of the soldier/farmers couldn’t afford fences, not that this really mattered, as the birds pretty quickly destroyed what fences were already there.  And just as quickly, began destroying the wheat fields.

The farmers tried to handle the problem for themselves, they picked up their rifles and shot a few of the birds, but they managed to kill only a handful of the pesky varmints before they ran out of expensive ammunition.  The farmers could have asked for help from the Minister of Agriculture, but being soldiers at heart, instead asked for help from the Minister of Defense.  Specifically, they wanted enough ammunition to wipe out all 20,000 birds, and they wanted machine guns to accomplish the task quickly and efficiently.


Sir George Pearce, the Minister of Defense, quickly agreed.  Not only would this make the government look like it actually cared about the farmers, but Pearce thought it would be good target practice for his men.  He sent Major G.P.W. Meredith, two soldiers, two Lewis machine guns, and 10,000 rounds of ammo to Western Australia, so confident of a quick success that he sent a Fox Movietone cameraman along to ensure that the Army received the proper credit.
The war commenced on November 2, 1932.  Meredith and his men found a small flock of 50 birds, set up their machine guns, dropped in 97 round drums and commenced firing.  And immediately, the Emu Army used a tactic that had not been planned on—the birds ran out of range. 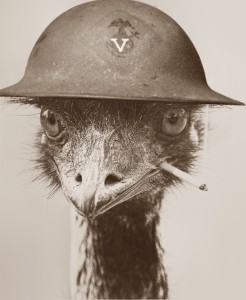 The Australian Army does not give up quickly, so Major Meredith and his men advanced on the enemy and resumed fire.  They enlisted the aid of farmers to try to herd the birds into an area where they could be entrapped and slaughtered.  This is the problem with subversive enemy emus:  they cannot be counted on to do their patriotic duty when required and those birds ran everywhere but toward the guns.  By the end of the day, Major Meredith reported that “a number of birds were killed.”  No doubt, this is true.  One is a number.  (So is zero, for that matter).
Two days later, the army was back.  Major Meredith had reconnoitered the area and found a perfect site for an ambush near a dam.  More than a thousand thirsty emus were moving toward the position.  The gunner waited until he could see the oranges of their eyes, opened fire….and managed to slaughter only a dozen of the enemy before the machine gun jammed and the avian army executed a rapid strategic withdrawal.


The enemy was proving to be more difficult than expected.  As one of the soldiers put it:
"The emus have proved that they are not so stupid as they are usually considered to be. Each mob has its leader, always an enormous black-plumed bird standing fully six-feet high, who keeps watch while his fellows busy themselves with the wheat. At the first suspicious sign, he gives the signal, and dozens of heads stretch up out of the crop. A few birds will take fright, starting a headlong stampede for the scrub, the leader always remaining until his followers have reached safety.”
At this time, Major Meredith decided that, if infantry tactics would not work, it was time to try the cavalry.  Borrowing a farmer’s truck, he had a machine gun mounted on the bed of the truck so that the Australian Army could pursue and destroy the enemy.

There proved to be a small flaw in this tactic:  Those birds are tall and, when running, they have a nine foot stride across rough terrain and can sprint seemingly forever at 31 mph.  (Given the sort of motivation that only a pursuing machine gun can provide, the emus can hit 35 mph).  And, while they are flightless, their stubby wings are quite efficient for helping them make surprisingly sharp turns while running at top speeds.  Wild cats can run faster than the emus for short distances, but they cannot turn fast enough to catch the elusive emus.


The truck however, had a top speed of 24 mph over flat land—a terrain found almost nowhere in Western Australia—and frankly, the truck’s turning radius sucked.  The soldiers were so desperate to stay in the bouncing swaying truck that no attempt was made to shoot at the enemy.  Finally, in desperation, the truck managed to run over one of the birds.  While this did indeed kill the emu, its body got so tangled up in the truck’s steering that the truck crashed through a farmer’s fence, severely damaging the vehicle. 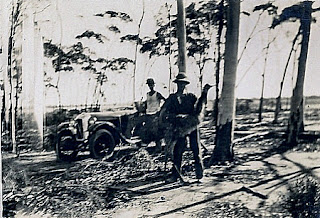 Even more surprising was the fact that when the soldiers performed a necropsy on the corpse of the enemy slaughtered by the truck, they were astonished to find that it was carrying around several bullets from their machine gun.  It seems that the birds were so tough that only a shot to a vital organ would kill it.  As Major Meredith later described it:


“If we had a military division with the bullet-carrying capacity of these birds, it would face any army in the world. They could face machine guns with the invulnerability of tanks. They are like Zulus, whom even dum-dum bullets would not stop.”
It was at this point that the Australian House of Representatives began discussing what the newspapers were calling the "Emu War".  When one politician asked whether “a medal was to be struck for those taking part in this war”, a colleague answered that they should rightly go to the emus who “have won every round so far.”
Major Meredith continued the war until December 12, 1932.  While he reported that his force has expended 9,860 rounds, his force had killed only 980 of the enemy (a number that was widely doubted by the farmers).

Over the next twenty years, the farmers repeatedly asked the Australian Army to once again take to the field and help them rid their farms of the enemy emus.  Each time, the Army politely—and very quietly—refused.