He was something of a wanderer and a dreamer—a romantic who was better suited as a student than as the engineer his family hoped he would be.  Sickly and weak most of his life, he was nevertheless an adventurous soul who could never be still for long.

While his father wanted him to study engineering, he wanted to study theater, literature—almost anything except engineering.  Finally, in something of a plea bargain, he settled on law.  When he was admitted to the bar, his father was happy, but he never actually began a legal career, instead beginning a lifelong habit of traveling the world.

It was during a trip through Europe that our dreamer first started to write a series of stories for a London magazine.  Before long, he had published an impressive number of travel articles.

It was while traveling through Belgium and France by canoe, that he met an American woman and despite her being more than ten years his senior and married with two small children—they quickly fell in love.  Fanny promised to return to California and obtain a divorce from her philandering husband (from whom she was already separated) so the two could be could be married.

While Fannie returned to America, our dreamer visited Unst Island, part of the Shetland Islands northeast of Scotland.  There he visited Muckle Flugga (No, I’m making this shit up—this is a true story—give or take a lie or two.) where his father and uncle were building the lighthouse that still stands there.  (Actually, building lighthouses was the family business: they were engineering pharologists.  The term comes from the Lighthouse of Pharo, one of the original Seven Wonders of the World.)

When he received word that Fanny had indeed obtained a divorce, he took passage to New York and after an extensive train journey, joined his fiancée in San Fernando, California.  The two were quickly married, but within a short time his health collapsed due to consumption (tuberculosis).

Strangely, his imagination seemed to soar when he was ill, and for the rest of his life, his best works would be done while he was ill.

One night, his twelve-year-old stepson drew a rough map of an island, no doubt inspired by the stories his stepfather had related about Unst Island.  The imaginary island even looked a little like Unst Island if you shut your good eye and squinted at it while drinking rum.  (It also helps if there is a parrot on your shoulder.)

The boy loved the game as his stepfather began inking onto the map exotic place names and imaginative features and before long, he was demanding stories to go along with the map.  Since this was just a game, the stepfather “borrowed” details from both fiction and history, mixed well with double doses of fun and fantasy.

Before long, the map had evolved into an imaginative tale of pirates and buried treasure—and for the first time ever, the pirates had left behind a treasure map on which `X` marked the spot where the chest full of pieces of eight were buried.  (There is no record of any pirate's ever doing anything remotely like this in real life.  Ask yourself, if you had buried a fortune in gold and silver, would you really need a map to find it again?)

His son liked the stories so much that he decided to write them down.  Writing as much as a chapter a night, the stories began appearing in a weekly magazine for children, “Young Folks.”  Titled “The Sea Cook: Treasure Island or the Mutiny of the Hispaniola”, the stories were all but ignored, perhaps for the simple reason that no child in history has ever referred to himself as a “young folk.”  (I strongly suspect that the magazine had a paid subscription list close to zero). 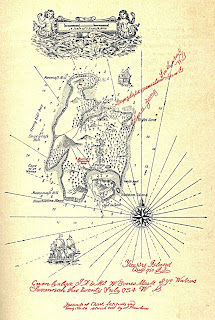 The next year, 1883, Robert Louis Stevenson republished the stories in a book, with a simplified title, Treasure Island.  Since then, the book has never been out of print, has become one of the most widely translated books in literary history, and has been made into more than fifty movies or television shows.  And, of course, the book has spawned an entire industry of imitators and spinoffs from Captain Jack Sparrow to Peter Pan’s Captain Hook.   (In one of the Peter Pan books the author, J. M. Barrie, states that the only man who ever frightened Long John Silver was Captain Hook.)

Sadly, when Stevenson began turning the individual stories into a book, he discovered that the original multi-color drawing of the island—the doodle that had created a billion dollar industry—had vanished.  The map that appears in the book is a recreation and if the original, now quite literally a treasure map, could be located, it would be worth a pirate’s treasure.
Posted by Mark Milliorn at 12:01 AM