More Than a Sinking Boat Story

Most people know something of Charles Lightoller and his experience aboard the RMS Titanic.  As the highest ranking officer of the doomed ship to survive, he has been featured in every movie, novel, and documentary about the tragic night of April 14, 1912.

Yet, there is a lot more to his life than the loss of just one large ship--even without that event, Lightoller’s life is the stuff of movies.  (Picture in your mind an adventure film starring Pierce Brosnan--at least, you will shortly.) 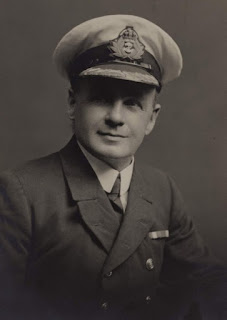 Born in Lancashire, England, he was effectively orphaned at age thirteen, when his father abandoned him to leave for New Zealand (his mother had died shortly after his birth).  To avoid the workhouses attached to orphanages, young Charles apprenticed himself on a sailing ship plying the south Atlantic.  On only his second voyage, the storm-damaged ship was forced to put in for repairs in Rio de Janeiro, arriving just in time for both a violent revolution and a smallpox epidemic.

The next year, 1889, while crossing the Indian Ocean, the ship was once again caught in a violent storm.  Damaged too badly to stay afloat, the captain intentionally grounded the vessel on a small, uninhabited island.  Luckily, the crew was soon rescued and taken to Australia, from which Lightoller was able to work his way back to England as a seaman on a clipper ship, one of the largest and fastest sailing vessels of the time.

Once again signing on as a seaman, he shipped out to Calcutta, where he passed the exam to get a second mate’s certificate.  While serving as third mate aboard a windjammer (a very large, iron-hulled ship powered by sails), the Knight of St. Michael, its cargo of coal caught fire, endangering the ship.  Lightoller heroically fought the fire and saved the ship, earning him a promotion to second mate.

However, the days of sailing ships were numbered, and though only 21, Lightoller had had enough of the dangers of wooden-hulled ships, and hired onto a steamship.  For three years, he traveled up and down the Western African coast with the African Royal Mail Service, during which time he nearly died from malaria.

Lightoller eventually wrote an autobiography, but most of the material was about his experiences at sea, so many of the details about the next few years away from the sea are a little sketchy.  Like an estimated 100,000 other men, Lightoller became part of the flood of men who headed for northwestern Canada during the Klondike Gold Rush of 1897-99.  Fewer than half of that number ever arrived at the gold fields, and a much smaller number actually found any gold.

When his funds ran out, Lightoller worked as a cowboy in Alberta.  Then, with almost no money, he became a hobo, riding the stabilizing rods under railroad cars as he made his way across Canada to get back to a seaport on the eastern coast of Canada. There, he found work on a cattle boat—not as a seaman—but as a cattle wrangler.  Though he arrived in England penniless, the voyage gave him enough experience that he hired on as third mate on the Knight Companion, yet another cattle boat.

By January of 1900, he had enough experience that he began a long and faithful career with the White Star Line as fourth Officer of the SS Medic, one of five Jubilee Class cruisers (so-called because they were all launched in 1899—the last year of the nineteenth century) built for the White Star Line.  Decidedly not a first class cruiser, this 550-foot ship hauled steerage class passengers and was occasionally used as a troop ship.

It was while serving on the Medic, that Lightoller was involved in what became known as the Fort Denison Incident.  In 1901, England was fighting the Boer War in South Africa, and for the first time, troops from the British colonies—including Australia—were involved.  When the Medic dropped anchor in Sydney, local passions about the war were unusually high--something that evidently Lightoller and a few shipmates found unusual.  Or as Lightoller put it in his autobiography:

England was then in the throes of the Boer War, with Australia more loyal, more patriotic, more fervently keen for Empire rights, than was even displayed at home. It is notorious that the Australians are always more British than the English themselves, loyal to the heart’s core, and every thought for the homeland. The scene on the quaysides, and in the towns when a contingent was leaving for South Africa, simply staggered belief. The people were patriotic mad, and had there been the ships and the necessity, every man jack in Australia would have volunteered.

Before dawn on the morning of October 6, 1901, Lightoller and two midshipmen rowed out to Fort Denison, an island fortress guarding the Sydney harbor.  On top of a tall rock tower, the three men raised a Boer flag from the lightning rod, and packed an aging cannon with 25 pounds of powder.  While a long fuse burned, the three men made good their escape, and were startled when the sky suddenly lit up with a loud crash.  Lightoller later recorded that he thought it couldn’t have been the cannon, it must have been lightning.  Lightoller’s other mistake of that night was using about four times too much powder.  The blast blew out most of the fort’s windows.

Depending on which Sydney newspaper you believe, the town either panicked, slept through the incident, or thought it was foolish.  There was, however, a government investigation.  While the authorities never caught those responsible, aboard the Medic, it quickly became common knowledge who had fired “the one gun salute.”  When the company brought him in for questioning, Lightoller confessed his role to the White Star officials whose reprimand would have been taken more seriously if they hadn’t been laughing.  Evidently naval people don’t care what you do to an army fort.

For his own safety, Lightoller was transferred from the Australia run, to the Atlantic—effectively a promotion.  Over the next ten years, he served on both the RMS Majestic and the RMS Oceanic as first mate.  Then, with an excellent record, he was transferred to the RMS Titanic as the second officer.

There is no need to talk about Lightoller’s actions aboard the Titanic, they are familiar to almost everyone--but allow me to add that his actions the night of April 14, 1912 are above reproach.  He strictly enforced order, and the only men he allowed to enter lifeboats were acting in the capacity of boat crew.  He literally went down with the ship, but was blown free by a blast of air.  When he took command of an overturned lifeboat, he saved dozens of lives, and was the last survivor to board the Carpathia.

Everyone knows that one of the many reasons that the Titanic sank was because the lookouts were not issued binoculars.  Much less well known is the reason why.  Lightoller was supposed to have been the ship’s second officer.  Shortly before sailing, however, Captain Smith brought a more experienced officer—for the inaugural voyage only—to be the ship’s first officer.  The original first officer became the second officer and Lightoller temporarily assumed the duties of the ship’s third officer.  The original third officer, David Blair, stayed behind in Liverpool with the key to the binocular locker in his pant’s pocket.

After the sinking, Lightoller was the highest ranking officer to survive the disaster, and was the chief witness at both the American Senate hearing and the British Board of Trade inquiry.

Lightoller’s testimony is a marvel of tact, company loyalty, and personal restraint.  The British inquiry was staffed by men who were knowledgeable about the sea, who understood exactly what was going on.  Since they knew if the design of the ship should be found at fault, British shipping suffer, and since they had approved the design of the ship, they would, in effect, be blaming themselves...so, of course, the British inquiry was a farce.

The American Senate inquiry, on the other hand, was run by people who were as ignorant as only a Senator can be, and who were totally inexperienced in all things naval, but who were committed to preventing future accidents.  (One senator even questioned Lightoller whether anyone hit by the falling funnel was hurt.)

While Lightoller steadfastly, and almost certainly knowing it was false, maintained that the ship did not break in two, he did manage to focus the public's attention on improving safety conditions rather than on becoming angry at either the White Star Line or the British Board of Trade.  As Lightoller later wrote, "it was very necessary to keep one’s hand on the whitewash brush".  Most of Lightoller’s recommendations, including that ships carry enough lifeboats for all aboard, mandatory lifeboat drills, and manning the wireless equipment around the clock, became part of international law.
Lightoller continued to serve with the White Star Line as a mate aboard the RMS Oceanic.  When World I started, both the ship and Lightoller were called up for active duty with the Royal Navy.  Lieutenant Lightoller was serving on the Oceanic went she went aground in Scapa Flow--the first Allied ship lost in the War.  (Ironically, she went aground because of an inaccurate fix of her position plotted by the ship’s navigator—David Blair, whom Lightoller had replaced as third officer on Titanic.).

Lightoller went on to serve on an aircraft carrier, and eventually was given command of two torpedo-boats, one of which sank after a collision on convoy duty, and another, which rammed and sank a German U-Boat.  Lightoller ended the war with the rank of Commander and a Distinguished Service Cross.

After the war, Lightoller stayed with the White Star Line, but soon realized that chances for advancement with the line were no longer possible.  Any crewman remotely connected with the Titanic had to be hidden, not given a responsible position.  Lightoller soon resigned and took a series of odd jobs ashore, such as innkeeper and chicken farmer.   Eventually, he and his wife found financial success speculating in real estate. 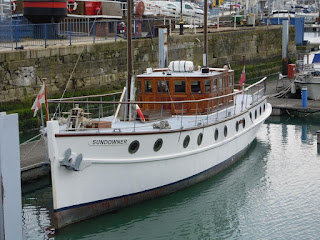 Lightoller wrote his autobiography in the 1930’s and, in retirement, bought his own private motor yacht, the Sundowner for family excursions.  This should have been the end of this story, but World War II provided one more chapter to the Lightoller story.

Shortly before France surrendered in World War II, the combined armies of the Britain, France, and Belgium were cut off, forced against the British Channel, and surrounded by German Panzer Corps.  Hitler, confident of an Allied surrender, issued the order for the German forces to halt in place.

The Allied forces organized a hasty flotilla of hundreds of merchant marine boats, pleasure craft, and lifeboats, escorted by 39 British destroyers and other larger ships, to sail to Dunkirk and evacuate the doomed soldiers.  In eight days, the “little ships of Dunkirk” evacuated 338,226 men.

One of the little ships was the Sundowner, captained by a 68 year-old retired Charles Lightoller, despite the fact that he was still grieving the loss of his son, Flying Officer Herbert Lightoller, who had been killed while bombing the German battleship Admiral Scheer.  Despite being attacked by German fighter planes, the Sundowner transported 130 soldiers back to England, reportedly packed together like sardines, almost capsizing when they reached the shore.  The ship today is on exhibit at the Ramsgate Maritime Museum.

Lightoller had learned to love smoking a pipe during his many years at sea, and even as his health declined, refused to give it up.  In 1952, London was still reeling from the effects of the war, with mandatory food rationing and almost every building being heated with coal.  That winter was called the Great Smog of ’52, which aggravated Lightoller’s heart disease.  Far from really retired, when he died at the age of 78, he was managing a small boatyard that built patrol boats for the river police.