Papel Picado, or ‘perforated paper’ is a Mexican handcraft or folk art dating back centuries.  Intricate designs are cut into multi-colored tissue paper using chisels and scissors.  These sheets are hung from strings to form long banners that can hang from houses, across streets, and decorate the walls of rooms.

Frankly, these are one of those things that everyone in the southwest frequently sees, rarely actually notices, and never has any idea that it actually has a name—much less that its form is the result of influences from around the world. 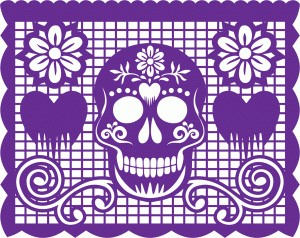 Present at almost every form of celebration such as baptisms, weddings, and funerals, they can also be found during holidays—especially during the “Days of the Dead”, Christmas, and Independence Day.

An interesting element of this art is the very ephemeral nature of the materials used.  Usually, the art is left to the mercy of the elements and disintegrates in only a few weeks, so there are very few historic examples of this art form.  This aggravates the problem of understanding the origins of this Mexican tradition.

Long before the Spanish arrived, the Aztecs had a tradition of making a form of paper called amatl from mulberry and fig bark.  The Aztecs used huge amounts of this paper and the surrounding villages and conquered tribes paid almost half a million sheets a year to the Aztecs as a form of bribe.  (Those who fell behind in paying their taxes got a one-way trip up the side of a ceremonial pyramid.) 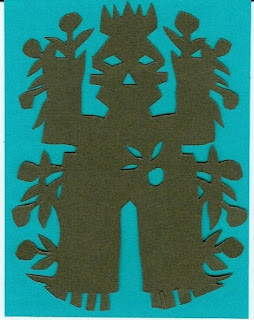 Besides using the amatl for writing and painting, the Aztecs used obsidian knives to cut the paper to produce silhouettes, primarily of a ceremonial nature, and included images of the numerous Aztec gods and goddesses (a practice that was discouraged by their Christian conquerors).  While few examples of the Aztec work survive today, amatl (now usually called amate) made in the traditional method is making something of a comeback today and is prized by artists.   I recently admired, but could not afford, a reproduction volume of Aztec codices painted on amate.

The traditional form of the art changed with the arrival of the Spanish.  China had invented the process of paper making in 105 AD, and by the sixth century, they had developed their own artistic style of cutting paper.  Called jianzhi (cut paper), both the new art form and the method of making paper spread westward across Asia along trade routes.  By 1150 AD, the Moors began making paper in newly conquered Spain.  The Moors, however would not allow graven images, so the art work was limited to geometric designs, and calligraphy expressing scriptures.

Both the knowledge of paper production, and the form of artwork associated with it spread rapidly across Europe.  In Germany it was called asscherenschnitte, in Poland, it was known as wycinanki, and in France it became silhouettes.   And when the Spanish came to New Spain (Mexico), they brought the tradition with them.  The Spanish introduced a new culture, with a different language, religion, tools, and art traditions with them. 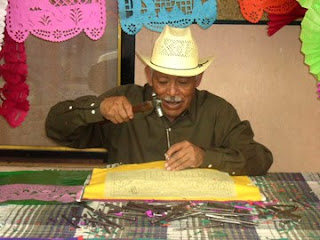 In Mexico, artisans abandoned the obsidian blades, and adopted metal chisels that could cut through multiple layers of paper accurately.  Today’s artists may use dozens of chisels, called fierritos, each with a different shape.  They work the paper, much like a leather worker uses his tools, to create intricate designs in the paper.

Shortly after the Spanish conquered Mexico, they took possession of the Philippines.  The Black Galleon of Manila, an annual convoy of goods from the Philippines, brought the merchandise from the Far East to Mexico, and among the silks and porcelain from China, was a new form of fine paper that was often used to wrap and protect the fine porcelain.  Called papel de China (Chinese paper), it proved a perfect medium for carving, for as many as 40 pages could be duplicated at one time.

Note.  This was also the likely origin of the luminarias (the term used in the south half of New Mexico), or farolitos (the term used in the north half of New Mexico) that are used to decorate walkways in front of southwestern homes at Christmas time.  It was probably Chinese paper lanterns that inspired the sand-filled paper bags that hold candles.  The tradition continues to evolve: lately the Spanglish term for these lights has morphed into bag-a-litos (the term used by pendejos gringos) and occasionally the new artificial plastic bags equipped with electric lights are called ‘fake-a-litos’ (the term used by idiotas).

Today, papel picado is still very popular.  . Much of the papel picado available in today's folk art market comes from the village of San Salvador Huixcolotla, Puebla, which lies southeast of Mexico City.  It is no longer necessary to go to the market to purchase it, since custom banners of any length, proclaiming any message, can be purchased on the internet. 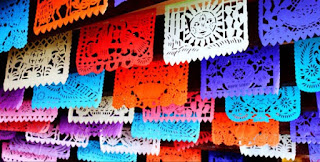 Distressingly, just as the purchase method has changed, the art form has morphed a little, too.  You no longer have to purchase your banners on flimsy tissue paper that will vanish with the next rain or spring wind.  Today, you can buy papel picado cut from plastic sheets that hang from nylon strings.  I have no doubt that somewhere, someone has replaced the sharpened chisels with laser printers that can cut out computer-generated art work.  And the modern form of this “art” will probably last in our landfills far longer than the people who produced it.  The Aztecs could never have begun to imagine that!