It seems strange that such a person should now be forgotten, for General Daniel Sickles was absurdly popular during the last half of the nineteenth century.  His reputation had just the right mix of sex, madness, and political intrigue that—had he lived today—it might have landed him in his own reality show.  Or, in a prison cell.

Daniel Sickles was born into a wealthy family in New York somewhere between 1819 and 1825—Dan may deliberately have "confused" the dates to appear younger than he actually was.  After college, he studied law under Benjamin Butler, the Attorney General of the United States, and was elected to the New York State Assembly.  Obviously, Dan was destined for great things, if he could only avoid trouble with the ladies. 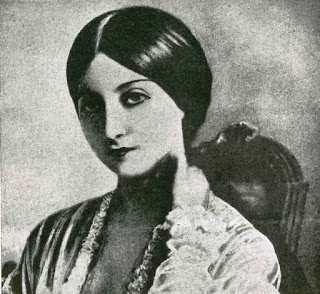 Unfortunately, Dan couldn’t:  his reputation was that of a scoundrel (albeit, perhaps one with a sense of humor).  He frequented whorehouses, made friends of pimps—even escorting one rather infamous madam through Tammany Hall—and seemed to develop a new love interest almost weekly.  One contemporary compared Dan’s morals to a rotten egg.

Although is not altogether surprising that he seduced the young daughter of the family he lived with, it is surprising that he married the young pregnant girl.  Even though he was more than twice her fifteen years of age, Dan married Teresa Bagioli against the wishes of both their families.  Besides her obvious beauty, it was said that she was worldly beyond her years and could speak five languages.

Dan became the Corporate Counselor for the City of New York, and helped the city acquire the land that was to become Central Park.  That he might have personally prospered in the selection of this real estate is probably accidental.  Most of what Tammany Hall did was "accidental".

In 1853, President Pierce sent Sickles to London as Secretary of the legation under then  Ambassador James Buchanan.  Presented to Queen Victoria, he cut something of a dashing image at the Court of Saint James, and evidently he made quite an impression among several of the Queen’s Ladies in Waiting.  Since Teresa was pregnant, he had left her behind in New York.  He did, however, take along to London his friend, the notorious madam and when he introduced her at court, he incorrectly identified her as having the same last name as one of his political rivals.  (This, too, was probably an "accident").

Taking advantage of his rank of Major in the New York Militia, Sickles insisted on wearing his dress uniform—complete with sword—to state occasions.  He even managed to cause a minor international incident when he snubbed Queen Victoria at a ball held on Independence Day.

On his return to Manhattan in 1855, he was elected to Congress.  He and Teresa took residence in a fine house just a pistol shot from the White House.  Almost immediately, there were rumors about Dan’s extra-curricular activities.  Surprisingly, there was soon a rumor about Teresa, as well.

The District Attorney for Washington DC was Barton Scott Key, the son of the prominent lawyer and amateur poet, Francis Scott Key.  Recently widowed, Barton Key was rumored to be the most handsome and eligible bachelor in Washington.  At the inaugural ball of President James Buchanan, Key became enamored with the young beautiful wife of his friend, Dan Sickles.

It was not long, before the flirtation became a serious affair.  Key rented a small, two-story house in the disreputable section of town, where freed Blacks lived—a part of Washington where no one in the upper social circles was likely to frequent.  (Currently, it is the site for the Bureau of Engraving and Printing.)  (At that time, freed Blacks could live in Washington only if they paid a bond, and secured a sponsorship from a White man).  Crime around the capital was so bad, that Congressmen and Senators frequently armed themselves with derringers for safety.

Teresa and Key, arranged a set of signals:  if he was in residence in their love nest, he would hang a piece of white string out the upper window and if she wanted to communicate with him that the coast was clear for a rendezvous, he could see her handkerchief waved from her bedroom window, as he watched with opera glasses from his station on a bench across the street from the Sickles’ house.  This subtlety borders on modern spy craft—no one would suspect any of this…or?

Of course people knew what was going on.  An attractive white woman coming and going—if you’ll pardon the phrase—in the middle of the day, in a bad section of town will attract attention.  Dan heard the rumors, but when confronted, his wife always denied the affair.  But eventually, Dan received an anonymous letter spelling out the details of the affair and he confronted Teresa so forcefully that she not only confessed, but at his insistence, wrote out the all of the sordid details in a sworn affidavit.  (Dan, remember, was an attorney.) 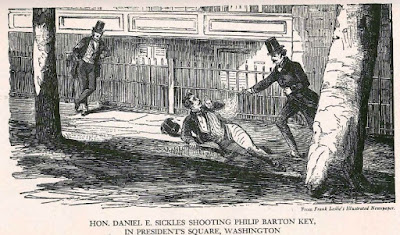 The next day, Barton Key was sitting rather conspicuously on a bench neat the Sickles’ home.  Dan rushed across the street, yelling, “Key, you scoundrel!  You have disgraced my house—you must die!”

Dan fired his Colt revolver, wounding Key, who sought protection behind the trunk of a slender tree.  Reaching into his coat pocket, where he normally carried his derringer, he produced and threw….his opera glasses.  (Never bring binoculars to a gun fight.)  The opera glasses bounced harmlessly off Dan, who once again tried to fire his Colt revolver, but the gun misfired.  Reaching into his pocket, Sickles produced his large bore derringer and shot Key again.  Throwing the derringer into the street, he returned to the Colt revolver and continued to fire at close range at the mortally wounded Key until all the working cylinders had been fired.  Dan dropped his revolver, walked to the home of the Attorney General, and surrendered.

This was not exactly a private affair.  The attack literally took place across the street from the White House in what is today, Lafayette Park.  The street was full of prominent officials who had witnessed the cold blooded murder of the city’s District Attorney by a prominent Congressman.  The legal system should be swift and harsh—if for no other reason than the victim just happened to be the nephew of the Chief Justice of the Supreme Court, Roger Taney.  (Taney is still infamous for his profoundly racist majority opinion in the Dred Scott Case.)

Nothing about this case was anything but weird.  Dan Sickles was incarcerated, but not in prison, but in the warden’s apartment.  For his own protection, he was allowed to keep his Colt revolver.  (Yes, that Colt revolver.)  He received so many visitors, that it was damn near a constant parade.  Congressmen, Senators, judges, and a secretary even brought a note from his friend, the President of the United States.  And the press loved the story.  Before long, the popular version of the story was that Sickles had defended the virtue of all of the women of Washington from the lustful threat of a demon.

At the trial, Sickles defended himself, aided by Edwin Stanton, the future Secretary of War for President Lincoln.  The defense pleaded not guilty by reason of temporary insanity—the first use of this defense in the United States.  Stanton argued that Sickles had been driven insane by his wife's infidelity, and thus was out of his mind when he shot Key.
Dan Sickles was acquitted, publicly forgave his wife, and while he tried to stay out of public life for a short time, did not resign his seat in Congress, which he still held when the Civil War started.

Like everything else in his life, Dan’s military career is controversial.  He performed well at recruiting men, he was good at organizing his forces, but his fighting career is sketchy.  When Lincoln recommended his promotion to Major General, he became the only Corps commander in the Union Army who had not graduated from West Point.  While he performed well in some battles, his headquarters was infamous for being a cross between a saloon and a bordello. 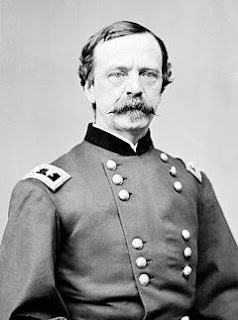 Most controversial was his decision at Gettysburg to move his force—without orders—to a position to oppose Confederate General Longstreet, resulting in the near total destruction of the forces under his command.  Criticism of his actions was further complicated by his having received a wound that led to the amputation of his right leg.  While, today, he is the only major general not memorialized on the battlefield with a monument, he did receive the Congressional Medal of Honor in 1897.  (Ironically, in the popular reenactments of the battle at the end of the century, the last two surviving major generals of the battle were Longstreet and Sickles.  Now close friends, they would help each other climb Little Round Top).

After the war, Sickles was sent on several State Department missions.  He secured from Colombia compliance with a treaty that allowed American troops to safely cross Panama.   (A few decades later, Theodore Roosevelt would come up with a much better solution—he simply “took” Panama.)  In 1869, after the death of his wife, Teresa, Sickles was sent to Spain as our Minister with the secret instructions to purchase Cuba.  (McKinley solved that problem a few years later by “taking” Cuba.)

While Sickles was never quite able to buy Cuba, you have to say that our relations with the country improved dramatically.   Queen Isabella II had been deposed in 1868, formally abdicating in 1870.  Her son, Alfonso XII, was restored to the throne in 1874.  During this time, while the royal family took up residence in exile in Paris, they were still quite powerful in Spain, since the monarchy was so strong with the Spanish people that few doubted its eventual restoration.

During this time, Dan Sickles, as the U.S. Minister to Spain, spent most of his time in Paris—usually "with" the queen.    He was so obviously the queen’s lover that the European press frequently referred to Sickles as "The Yankee King of Spain".   While the Queen’s Consort, Francis, the Duke of Cadiz, did not particularly care (openly homosexual, he frequently hinted that none of their children were actually his), the Queen did not like the scandal.

So, Dan Sickles was married again, this time to Carmina Creagh, a member of the Queen’s household and the daughter of Chevalier de Creagh of Madrid, a Spanish Councilor of State.  While they eventually had two children, Dan spent very little time with his wife.  At one point, while they both lived in New York, they maintained two separate households for almost thirty years.

Dan Sickles returned to Congress for one term, but otherwise lived out the rest of his life on his military retirement pay.  Eventually, one of his neighbors was Mark Twain, who once said of the general, “I have been told that Wagner’s music is better than it sounds.  That fits the general’s manner of speech exactly.  His talk is much better than it is...His talk does not sound entertaining, but it is distinctly entertaining."

Twain may have enjoyed the general's conversation, but he used to tire of Sickles' constant talk about his missing leg—he thought that "the general valued his lost leg a way above the one that is left.  I am perfectly sure that if he had to part with either of them, he would part with the one that he has got."


Dan Sickles spent the rest of his life in New York, passing away in May 1914.  He is buried in Arlington Cemetery and while his funeral in New York included a grand parade through Manhattan, his memory today is little more than a footnote in legal books.
Posted by Mark Milliorn at 12:01 AM