Just what is Fascism, Anyway?

In 1990, Mike Godwin, an attorney, stated online that the longer a popular argument continued, the more likely it was that someone would compare something or someone to Hitler or Nazism.  Almost immediately, this became known as Godwin’s Law.

And almost as fast, people began using the law inappropriately, saying that any mention of Nazi Germany meant that the speaker automatically lost the argument and that the discussion was therefore over.  At Enema U, there is an abundance of those who use this adage as a club designed to censor those they oppose, but pepper their own personal posts in social media with references to “brown shirts” and fascists.  (Of course, most of these comments are directed toward the administration, so they are not completely inappropriate.) 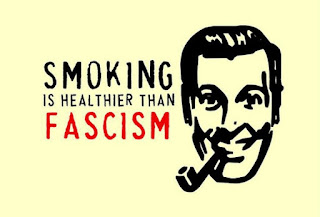 Mike Godwin recently stated that in no way should his law be used to stifle thoughtful and informed comparisons to Nazi Germany.  And then, violating his own law, he added, "Or anything said about Donald Trump."

All of this is rather similar to what I call the "Fox News Law"—the more people talk at the same time, the more likely someone will be called a fascist.  The law can also be used with MSNBC, but since someone is called a fascist in damn near every show (and quite a few commercials) reference to it is less impressive since it's such a "target-rich environment.

In light of all of this, it might be useful to actually define fascism.  In an election where hyperbole has already bitten us in the ass, we need to be knowledgeable about our insults.

Defining fascism is a little more difficult than you might think.  Benito Mussolini gave a less than helpful official explanation:

1."Everything in the state".  The Government is supreme and the country is all encompassing, and all within it must conform to the ruling body, often a dictator.
2."Nothing outside the state".  The country must grow and the implied goal of any fascist nation is to rule the world, and have every human submit to the government.
3."Nothing against the state".  Any type of questioning the government is not to be tolerated. If you do not see things our way, you are wrong.  If you do not agree with the government, you cannot be allowed to live and taint the minds of the rest of the good citizens.

This is a little restrictive, so there is a more general definition where fascism is defined as a form of government that generally uses several of a group of traits.  No single trait is absolutely necessary, and while fascist states vary, most have a majority of the following traits:

A Strong Charismatic Leader.  A dictator who has a strong following, not so much because of his intelligence or accomplishments, but because he promises everything to everybody.  Nearly all Fascist leaders promise to return a country to greatness.  This is a leader who understands the anger or disappointment of the masses, and offers improbable solutions.  And this is a little scary, since every politician seeking elected office strives to be exactly this.

Suppression of Democracy.  Fascist leaders go out of their way to outlaw political parties, cancel elections, and declare martial law to remain in power.  The irony in this is that many Fascist dictators—Hitler, Mussolini, Peron, Porfirio Diaz—came to power through free and fair elections—And then promptly found ways to stop having them (usually for what they claimed was the good of the people.

Anti-Labor.  Since labor unions are centers of power outside of the state, most fascist leaders find ways to suppress the unions, sometimes by co-opting their power and making labor unions part of the government.

Government Control of the Economy.  Fascist states usually believe in strongly regulating business, harnessing it supposedly for the good of the people, but actually for using it as a means of controlling the masses while enriching themselves.  Competition is not allowed, wages are set by the government, and productivity inevitably drops precipitously.

Super Nationalism.  There is certainly nothing wrong with patriotism, at least not until it blinds you to systemic wrongs and keeps you from making improvements—And when patriotism becomes mandatory, it is always wrong.

Samuel Johnson's most famous line is "patriotism is the last refuge of a scoundrel."  I have always understood this to mean that it is only the demagogue, the despot, who seeks to further his cause by appealing to your love of your country.

Xenophobia.  When someone tells you that all of our problems are caused by outsiders, by people who are different, it is time to put your hand firmly over your wallet and run.  I don't care how reasonable it sounds, this country simply does not need to build a wall along the Canadian border to keep the Frostbacks out.

This is why the 21 Muslim countries of the Middle East—most of which easily qualify as Fascist states—tell their 350 million people that all of their problems are the result of the 6 million Jews in Israel.

Collectivity Over Individualism.  This almost sounds good, as it is widely believed that the greatest good for the greatest number is the supreme goal of government.  But, it isn't, otherwise government is simply two wolves and a sheep discussing the dinner menu.  It is the responsibility of the many to protect the rights of the few and we need to be wary of the politician who talks about individuals surrendering rights for the good of society.

That last point was always the most difficult for my students to understand, to understand that protecting individuality is just as important to society as promoting the common good.  To help reinforce this, I used to get freshmen to join me in taking Steve Martin's Non-Conformist Oath.  I get them to stand and raise their right hands and repeat after me:

I promise to be different.  (There is unanimous compliance.)
I promise to be unique.  (By now, one or two students are starting to narrow their eyes and look a little skeptical.  Unfortunately, it is only one or two.)
I promise NOT to repeat things other people say.  (Few make it to the end of this sentence.)

Don't kid yourselves people:  It can happen here, and if it does, it will start in the ballot box.
Posted by Mark Milliorn at 12:01 AM