The fever was raging through the federal prison, with as many as thirty men a day falling to the dreaded disease.  As fast as the patients became ill, they were loaded onto a small boat—so small that the sick had to sit up in it—and rowed the two and a half miles to a small hospital located on an isolated key, or island.

Fort Jefferson was located on Garden Key, located three hundred miles west of Miami.  The actual fort occupied 2/3 of the twenty-five acres that made up the tiny waterless island, and the large brick fort housed 486 soldiers, 527 prisoners, and the lighthouse keeper and his family.  In addition, many of the officers had brought their wives and children to the tiny fortress island.  Altogether, the tiny island was crowded with people who formed a strange community.  Considering the remoteness of the location, the garrison had the most useless extra security imaginable:  it was surrounded by a moat containing a man-eating shark.  (And yes, on at least one occasion, it ate a prisoner who was attempting to escape). 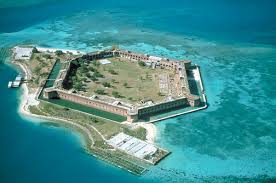 Fort Jefferson had been under continual construction since 1846, and was still not yet finished.  All of the building materials had to be imported.  Millions of bricks were brought in from Maine, lumber from Georgia, and cement from Boston.  Food for both the prisoners and the soldiers was shipped from Florida, and even the soldiers were imported from the North, as in these days just following the close of the Civil War, the US Army consisted solely of Union troops while the South underwent reconstruction.

The small collection of islands were called the Dry Tortugas, though the press frequently referred to the federal prison as the American Devil’s Island.  Duty on the isolated garrison  was so harsh that the Army had learned that military units stationed there had to be rotated regularly to prevent mutiny.  This policy was only partially successful, as soldiers deserted from the island about as often as prisoners escaped.

For the prisoners, the fortress had the reputation for being the worst prison in the country.  The hot weather, the humidity, and the endless sun were relentless.  The prisoners were attacked daily by insects, particularly by the swarms of mosquitoes that never left the island.  Just as harsh was the discipline.  Since the prison housed the very worst of the nation's prisoners, the murderers and traitors who made up the majority of the inmates were dealt with cruelly.  Prisoners were flogged, beaten, hung by their thumbs, or given long stretches in what the soldiers referred to as the “dungeon.”  Above the entrance to this lightless cell hung an ominous sign, “Whoso entereth here leaveth all hope behind.”

Most prisoners were forced to wear heavy chains, and for the slightest infraction of the prison rules, a 32-pound cannon ball would be added to the chains.  But the wearing of chains did not exempt the prisoners from the work details.  To complete the misery, the food on the small island was all but inedible.  With few vegetables other than potatoes, almost no fruit, and the rotting meat, both the soldiers and prisoners were frequently sick.

Epidemics on the island, however, were all but unknown.  Due to the island’s enforced isolation, infectious diseases were rare.  This changed the first week of August 1867, when Captain George Crabbe returned from a furlough in Havana.  Almost immediately after he returned, he began complaining of a fever and was quarantined in the garrison hospital.  Vomiting started two days later; it was clear at first, but then it turned black.  Within five days, Captain Crabbe died from Yellow Fever.

Yellow Fever is a viral disease that killed one out of five people stricken with the mysterious illness.  Victims complained of intense headaches, fevers, chills, and frequent vomiting.  The patient’s skin turned yellow as the liver slowly ceased to function.  Dark bruises appeared on the victim’s skin and the more severely afflicted began to cough up what looked like coffee grounds—in reality coagulated blood as the victim began to drown in his own blood.

Unfortunately, how the disease spread, what caused it, and even any means to effectively treat it were completely unknown.  The most popular theory was that the disease was caused by an "imbalance of humors" and the result of "bad air".  A common prevention was to open more windows and let in more good air (and a few more mosquitoes).  It is the blackest ironic humor to consider that this disease (like malaria and several others) probably came to the new world in the water barrels of slave ships.  The Amazon rainforest was not a mystery well into the twentieth century because travel to it was difficult—it was because travel in the mosquito-infested wetlands would kill explorers with the diseases that the Europeans had brought there.

For a week, every inhabitant of the tiny island lived in fear.  Would the disease spread?  One week later, everyone on the island knew the answer.  Men began staggering to the prison hospital, their throats inflamed, complaining of fever and chills.  At first, the garrison doctor tried to handle the flood, but then he caught the disease.  By now, two-thirds of the soldiers and inmates were suffering from the same disease.

With no other doctor on the island, Major Stone, the garrison commander, was forced to turn to prisoner #1524, a convicted felon serving a life sentence.  He was presently assigned to a building detail, but before his imprisonment, he had been a practicing physician.

The prisoner, a Southerner had been given a sentence far more severe than his crime, and had been sent to the prison in the hopes he would perish there.  Within months of his arrival, he learned that the new troops being sent to the island were a black unit, and it was rumored that they would exact revenge against Southern prisoners, especially former slave owners like prisoner #1524.  Frightened for his life, he had attempted an escape, been caught, and given heavy chains to wear, condemned to the dungeon for a long confinement, and been assigned the harshest work detail.  The former doctor had no reason to help the commanding officer.  Since most people believed that the disease was spread by contact, the prisoner would be safer if he refused.  (And Major Stone expected the prisoner to refuse, in part as a Southern statement against Northern reconstruction).

Prisoner #1524 accepted the job, took command of the prison hospital and immediately began caring for the sick.  Even today, the only treatment available for those suffering from Yellow Fever is to give them plenty of fluids, make them comfortable, and wait for the fever to pass.  In the nineteenth century, physicians expected a 25% mortality rate, a rate that was much higher than the patients suffered under the care of the prisoner physician.

For 47 days, Prisoner #1524 cared for the sick.  He brought back those removed to the island hospital, correctly reasoning that better care could be given if the sick were together in one facility.  He trained nurses, expanded the hospital, and watched as slowly, the sick began improving.  And shortly after a physician from Florida finally arrived to assist him, Prisoner #1524 caught the disease himself.

The prisoner/physician recovered, and Major Stone did not put him back in leg irons.  Instead, he was given work in the prison hospital.  And three hundred soldiers signed a petition to the President of the United States, requesting that he grant an amnesty to the prisoner they credited to saving their lives.

Even a century and a half ago, Washington moved slowly.  On February 8, 1869, during his last month in office, President Andrew Johnson finally signed an amnesty for Dr. Samuel Mudd, citing his courageous work during the 1867 epidemic.  Dr. Mudd was released from prison one month later, returning to his Maryland farm, where he resumed his medical practice.

There is still no conclusive proof that Dr. Mudd was an active member of the group that assassinated President Lincoln—all that can be proved is that Dr. Mudd met with John Wilkes Booth twice in the months before the president was killed, then just hours after Booth shot Lincoln, Dr. Mudd cared for Booth in his home and set his broken leg.  Dr. Mudd’s military trial was a farce, his harsh sentence was dictated more by hatred than by justice.  Regardless of his guilt or innocence, Dr. Mudd, Prisoner #1524, certainly earned his release.

While the insult “Your name is mud” was used decades before the Lincoln assassination in England, it became a popular phrase in America because of Dr. Mudd’s conviction.  Considering his heroic acts at Fort Jefferson, perhaps it is time for us to reconsider the phrase.  Maybe it’s a compliment.