The Battle of Mosul, Round One

As I write this, American soldiers are involved in the fighting to retake the Iraqi city of Mosul from ISIS.  This is the second time American troops have fought in a major engagement here: just a dozen years ago, the Marines maintained a large helicopter base there. 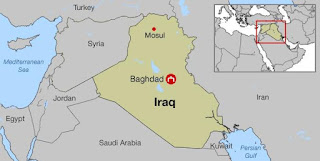 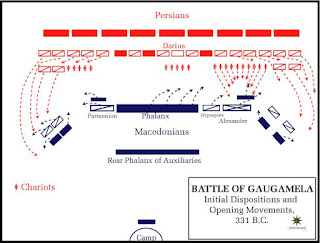 For an ancient battle, while Gaugamela is exceptionally well documented, we still wish there were more detail of exactly what happened.  Four different writers recorded what happened, but they were limited to reporting what happened in their individual area of the battle.  Partly because of the huge dust cloud generated, and partly because of the natural fog of war, their accounts are limited, but the general course of the battle is known.
Alexander drew up his army in the standard formation with his Greek phalanxes and the infantry in the center, with Parmenio and the allied cavalry on the left, and with Alexander, himself, at the head of his Companions on the right.  However, there were two changes to this standard formation: first, a second phalanx of Greek allies and mercenaries was drawn up behind and parallel to the main phalanx. Second, light-armed and cavalry detachments were stationed on the extreme left and right of the forward formation, but moved back slightly to guard the flanks and cover the gap between the two phalanxes. These troops were positioned for defense, since Alexander expected the larger Persian force to flank his force on both sides—ordinarily a sure sign of an imminent military disaster.
As it advanced, Alexander’s army moved toward the right, where the Persian overlap was most pronounced. Now this may have been an intentional move, intended to generate uncertainty among the Persians and a probe for weaknesses, or it could have been an error. Whatever the case, the rightward shift worked wonders for Alexander. Darius opened by sending his scythed chariots and some of the cavalry units into action, but these had no  real effect. The skirmishers on Alexander's side handled the chariots easily enough, mostly by killing their horses. (You never see this in the movies, but if you really want to stop that stagecoach—shoot the lead horse.  The whole contraption will go ass over teacups—a technical term, of course.)
In the face of the rightward shift of the Macedonian army, a gap opened between the Persian center and its left wing, which was wheeling around in the anticipated flanking movement. Alexander and his Companions were perfectly placed on the right to take advantage of this gap, and wedged the cavalry relentlessly into this gap, assailing the wings of the Persian center and left and pushing to get to the rear to reach Darius himself, who retreated.  The phalanx now engaged the Persian center and began its terrifying work of butchery.  Gaugamela was, in the end, a classic hammer-and-anvil battle, with the Persians pinned by the phalanx while the cavalry drove to the rear.
On the left, Parmenio’s job was merely to hold his command and prevent the Persians from getting in behind the Macedonian line. But he was under immense pressure. Pinned down, a gap appeared in the Macedonian line to the right of Parmenio’s position as the phalanx moved up to engage the Persians—a gap, in fact, almost identical to the one that had appeared in the Persian line. Indeed, some Persian cavalry drove through this gap, but uselessly attacked the Macedonian camp, before the reserve phalanx moved up to neutralize them. 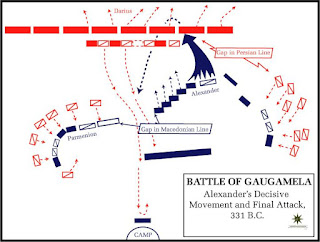 Parmenio sent riders to the king asking for assistance anyway, messages that probably never got through to Alexander. Somehow, Parmenio held out unassisted, and the phalanx, having dispensed with the Persian center, now came to his relief. As word filtered down the Persian line that Darius had fled, the will to fight vanished and the Persians broke and ran.  Since much of the Persian army was cavalry and the ground around them open, casualties probably were only a few thousand. The greatest Macedonian losses were on the hard-pressed left, under Parmenio, but overall they were minimal, only a few hundred.  For so great a reward as the Persian Empire, the cost in lives had been remarkably low.


Darius fled in fear for his life, only to be murdered by one of his own generals the following summer.  Alexander went on, of course, to conquer the rest of the Persian Empire.
Alexander’s victory at Gaugamela gave him the Persian throne. The two main sources of that victory were his driving charge into the gap on the Persian right and Parmenio’s superb holding action on the left.  Had either failed, the outcome of the day would have been very different.
This was clearly a turning point in history: had Darius won, he undoubtedly would have expanded his empire into present day Europe, well before the rise of the Roman Empire.  The modern world might have looked very different had he succeeded.
Alexander probably should have stopped and consolidated his gains, but he continued eastward.  A less powerful Persian Empire would eventually rise after his death, but by then the Roman Empire would have replaced the Macedonians as the great power in the West.
Once again, we are at Mosul, and once again, we are fighting an eastern force threatening to overrun Europe.  I leave it to you whether we have anyone even faintly resembling modern-day equivalents of either Darius or Alexander--and who that might be.
Posted by Mark Milliorn at 12:01 AM