From Stevedore to Captain

The Civil War began as an effort to preserve the union, but as time went on, the North seized the moral high ground by making freedom for southern slaves a major goal of the war.  This did not mean, however, that the North believed in the equality of all men.

It was generally believed that the Negro was mentally inferior and intellectually incapable of performing complex tasks.  Even the abolitionist John Brown believed that the freed slaves would have to be led and supervised like children.  While gathering arms for his proposed black army that would sweep through the south ending slavery, Brown gathered pikes, believing that firearms were too complicated for Negroes.

In the North, for the first years of the war, a law that had been enacted in 1792 prohibited blacks from enlisting or fighting in the war.  Despite the fact that black soldiers had served with distinction in both the Revolutionary War and the War of 1812, even as white men were drafted, black men were not allowed to even volunteer.  The remarkable accomplishments of Robert Smalls helped change this.

Robert Smalls was born a slave, to parents who were slaves, in South Carolina.  Today, the stereotypical view of slaves are of men who exclusively worked in the fields picking cotton or tobacco.  Actually, many slaves worked in town as craftsmen, such as carpenters, blacksmiths, or musicians, who earned wages that were turned over to their masters.  Smalls was hired out as a stevedore, loading and unloading the shallow-draft ships that plied the coastal plantations.

Cotton was the principal cash crop, and every small community had a cotton press built near a coastal inlet or the mouth of a small river or creek.  Loose cotton was pressed (usually by mule, or occasionally, steam power) into bales weighing between 400 and 500 pounds.  Shallow-draft ships would then carry the heavy bales to a larger port where they could be offloaded, sold, and then loaded onto ships bound for Northern U.S. or British mills.

It was on one of those shallow-draft ships that Smalls rose to prominence.  By hard work and natural ability, the uneducated slave became, first, a seaman, and eventually a wheelman (had he been white, Smalls would have been called a pilot).

Pilots did more than simply steer the ship:  they navigated the course, and most important, had an encyclopedic knowledge of the local sandbars and reefs along the shallow shores of the south all the way down to Florida.  Pilots knew how to interpret the currents, knew the locations of uncharted docks, and had memorized where lay the submerged tree stumps that could easily rip the bottom off a wayward vessel.  On many vessels, a good pilot was paid more the ships's captain. 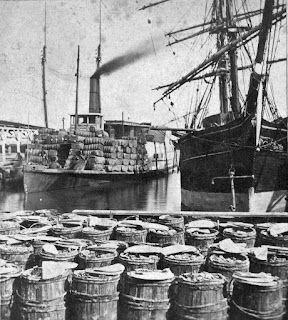 Smalls was a wheelman on the Planter, and his wages went to his master, Henry McKee of Beaufort, South Carolina.  The Planter  (pictured at right as a prewar merchant ship) was 147 feet long, with a beam of 30 feet.  A steam-powered side-wheeler, with a draft less than four feet, she was the perfect ship for calling on small ports and inlets up and down the coast, transporting heavy loads of cotton.

After the fall of Fort Sumter and the start of the war, the CSS Planter was the perfect ship for transporting men and supplies for the Confederacy.  Stationed in Charleston Harbor and now lightly fortified and carrying two small cannons, she was capable of moving more than 1000 men along with supplies up and down the coast despite the deep draft ocean-going vessels of the US Navy blockading the port.

Smalls continued as the wheelman of the Planter, which by now had a crew of eight slaves and four white officers.  Exactly when Smalls began thinking of escaping from slavery is unclear, but he must have been inspired by the sight of Union ships stationed just past Fort Sumter.  Smalls and the other slaves began plotting their run for freedom.

Against direct orders to the contrary, the captain and his officers slept ashore.   In the early morning hours of May 13, 1862, Smalls fired up the ship's boilers as normal--only a few hours early.   No one paid any attention as the ship left the the military docks and proceeded down the river, to a rendezvous point at which it quietly pulled alongside another vessel, taking on the wives and families of the escaping slaves.

As the vessel passed each Confederate checkpoint, the ship gave the appropriate signal.  while passing the guns of Fort Sumter, Smalls donned the Captain's hat, stood on the bow with his back turned to the sentries.  When the ship's whistle sounded the appropriate signal--two longs and a short--the men standing guard on shore waved at the vessel.  Politely, Smalls waved back, while being careful to keep his face averted. 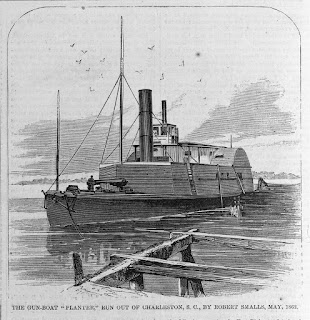 Once past the fort, the deception ended as the Planter did not turn to continue down the coast, but steamed directly for the nearest Federal ship, the USS Onward.  The danger was no longer the Confederate guns, but convincing the naval ships that the Planter was not attempting to attack.  As the Onward's Captain, J.F. Nichols, prepared to fire a broadside into the Confederate ship, Smalls ordered the crew to raise a white sheet as a signal that the ship intended to surrender.

Not only did the US Navy accept the surrender, but they treated the ship as a captured prize vessel, meaning that the crew was entitled to a cash payment equal to half the value of the ship, plus the value of the cargo--in this case four dismounted cannons and 200 pounds of ammunition.  Smalls would eventually receive $6,500 in prize money ($150,411.12 in 2017 dollars).  In addition, the rear admiral in charge of the Charleston blockade kept Smalls as pilot aboard the new USS Planter.

More valuable than the ship itself, Smalls turned over to the US Navy the captain''s code book and maps showing the location of Confederate mines (then called torpedoes) and coastal gun emplacements.  Back in Charleston, the ship's white Confederate officers were facing court martial.

The escaping slaves with their stolen warship were a propaganda coup for the North, with newspapers and magazines turning Smalls into a national hero.  Harper's Weekly embellished the story, having "an aging darky" outwitting the Confederate checkpoints.  In actuality, Smalls was only 23.

After touring Northern churches, lecturing on the war and slavery, Smalls returned to the Planter, using his knowledge about the South Carolina coast while he participated on over a dozen raids.  In one such action, while under fire, the white Captain fled below decks seeking safety forcing Smalls to take over command of the ship and finish the raid.  Shortly after the raid, he was appointed the ship's captain, a post he held for the rest of the war.

Of the approximate 200,000 black men who served in either the army or the navy, fewer than 80 served as commissioned officers. 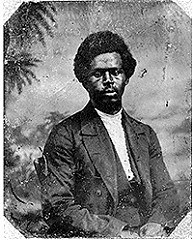 When Smalls escaped, it was still a year before the North would allow Blacks to serve in the Army, and his exploits were among the arguments that eventually allowed blacks to enlist.  Even after Blacks were finally allowed to enlist, initially their monthly pay was only $10 per month with $3 subtracted for uniforms and food.   White soldiers received $13 a month with no deductions.  This contrasted with Smalls, who received $150 a month as a ship's captain.

After the war, Smalls, a Republican, served in the constitutional convention that wrote the new constitution for South Carolina, where he co-authored the civil rights clause.  Serving in both the state's House and Senate, he was elected to the U.S. House of Representatives in 1874 where he served until 1887, after Reconstruction had ended and the state's Democratic Party had disenfranchised Blacks.  Smalls returned to Beaufort, South Carolina as a Customs Agent.  When he applied for a pension, it was discovered that all of the official paperwork had been lost and the Navy refused to grant his pension despite the numerous newspaper and magazine articles documenting his career.  His pension, $30 a month, was eventually authorized by an act of Congress.

Significant among his legislation is a bill authorizing a naval coaling station at Port Royal, South Carolina.  The small outpost grew rapidly over the years and its name was changed several times.  Today, it is called Paris Island Marine Corp Training Depot, where it provides basic training to 19,000 newly inducted Marines a year.
Posted by Mark Milliorn at 12:01 AM