One Picture and Less Than a Thousand Words

I recently attended a very nice wedding. It has been a while since I was at a wedding.  You can tell you’re getting older when you attend more funerals than weddings. I had a hard time finding my official wedding tie, I had to break down and wear my official funeral tie. Now that I think about it, I’m going to make the funeral tie my permanent wedding tie, because I have decided I’m not going to anyone’s funeral unless he comes to mine first.

It was a beautiful wedding, something everyone noticed as nearly everyone was taking pictures of it. Which got me thinking about digital cameras.

According to the briefest possible Google search, 100 million cameras are sold in the US each year. Since they have been selling for a while, this must mean there are more cameras in America than steak knives. More numerous than strange people at Wal-Mart. And never again is there a possibility of anything happening in the world without a half dozen cameras recording the event.

I suppose that as a historian, I should be thrilled. There are countless events throughout history that needed to have been recorded, yet for undeniably selfish reasons, not a single person was thoughtful enough drag out his cell phone and use the video camera. What were Caesar’s last words? What did Father Hidalgo really say in his El Grito speech? Was Cleopatra beautiful, or as ugly as a mud fence?

I won’t have to worry about that ever again. Now, I could go five miles out into the desert and whisper something to a jackrabbit and view the conversation on YouTube the next day. No society in history has been as self-obsessed with recording the day-to-day trivia of everyday life. Years ago, only important events were photographed. Are we recording every minute of our lives in an effort to make them more important? Validation through photography?

Why? There was an official photographer with an extremely expensive camera taking pictures. I don’t know very much about photography, but he looked competent to me. Evidently, no one else had any faith in him for they were taking photos with cell phones and little digital cameras.

Even someone who doesn’t know much about photography knows:

• The tiny little flash on a pocket sized digital camera will only reach 10 feet.

• The maximum range of a cell phone camera is about 6 feet. If you take a picture of anything farther away than the other side of the table, you are creating abstract art. 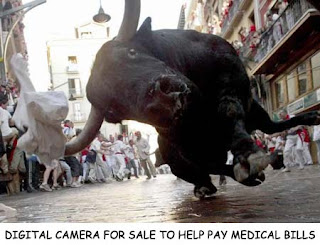 Those are the things I know about photography, but I have a few questions. Why do little digital cameras make such a racket? Why do they make a little whirring noise as if they were advancing film? Most of them have a digital shutter, shouldn’t they be completely quiet?

This fascination with shutter noises started with George Eastman, one of the pioneers in photography. In George’s opinion, the noise the camera produced when you released the shutter was a distinctive “Ko-Dak!” Engaging in a little onomatopoeia, a word that imitates the sound it represents, he named his company Eastman Kodak.

Why do people immediately take the same idiotic poses every time you point a camera at them? They put their heads together, use a smile completely unnatural, and stare wide-eyed at the camera. This pose never happens naturally. When you enter a room, do your friends bump heads together and grin like clowns?

Is it just me, or do photos distort your memory? When I go on vacation, if I take pictures, all I seem to remember are the places where I took a picture. Without photos, I seem to remember a lot more. Do cameras record events or distort them? Do real memories only live on glossy paper?

Nah, it’s probably just me. Why else would they have sold 100 million cameras last year?
Posted by Mark Milliorn at 12:01 AM