The statute of limitations has run out, so I can probably get away with telling this story.  Besides, as a historian, shouldn’t I help spread the truth?

Ten years ago, the History Department at my university had a conference on the Korean War.  Southern New Mexico is a popular retirement area for the military, so this was a conference that would be popular with local veterans.  There were so many attendees, that the conference was held at a local hotel’s largest ballroom. 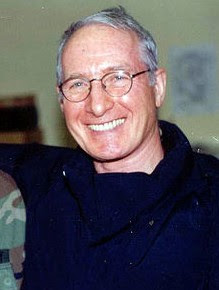 A large conference needs a guest speaker, someone with name recognition, someone like… Colonel David H. Hackworth.  To say that the late Colonel Hackworth was controversial is an understatement of the largest order imaginable.

Colonel David Hackworth was a highly decorated combat soldier who enlisted in the Merchant Marines during World War II at the age of 14.  When the war was over, he lied about his age, again, so he could enlist in the U.S. Army, serving in the occupation army at Trieste.  When the Korean War started, Sergeant Hackworth volunteered for the first of two tours.  Serving in the 25th Infantry, he earned a battlefield commission to lieutenant.  After the successful raid on Hill 1062, he earned a battlefield promotion and the command of the 27th Wolfhound Raiders.  By the end of the Korean War, Hackworth was a highly decorated captain.

Hackworth served with distinction in Vietnam, eventually retiring from the Army as a Colonel.  During his career, he was awarded over 90 combat awards and citations.  Among his awards were eight purple hearts.

After the war, Colonel Hackworth became a successful businessman, a bestselling author, and a journalist for Newsweek Magazine.   Colonel Hackworth passed away five years ago from cancer, probably related to the defoliant Agent Blue, which the United States used during the Vietnam War.

Colonel Hackworth was a plain spoken and articulate critic of the way the Korean War had been fought, and his opinions had been clearly stated in several of his books, so the conference was a great success.  Everyone wanted to hear his views on the Korean War, and he did not disappoint his audience.  I won’t pretend to be able to accurately present the colonel’s views, but let me sum up by suggesting that, in his view, the contributions of the United States Air Force in the Korean War were not… helpful. 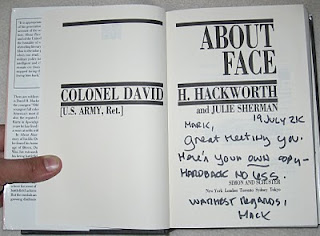 Colonel Hackworth told the old joke about how the only way some infantry units could tell that the Air Force was fully cooperative, perhaps even participating, in the war was by the numerous times they were bombed by mistake.

When his speech was over, Colonel Hackworth left the ballroom and appeared, at least to me, to be making a direct advance on the hotel bar.  On the way, a tall white-haired Air Force Colonel intercepted Colonel Hackworth, “Colonel, I served in the Air Force during the war.  I disagree with several of the things you said about the Air Force.”

I have always thought that this pretty well settled the question of which was more effective; the Air Force or the Infantry.

Hackworth continued on to the bar.  My boss spent the next half hour trying to convince several people that no one really wanted to call the police.   I didn’t hear much of that conversation: I was in the bar, too.