My son, What’s-His-Name, taught me a cute trick about nuking a white grape in a microwave the other day. It takes too long to explain, but if you are really interested, you can see how to do it here. It seems the internet is full of ways to turn your microwave into a personal incinerator or self defense weapon.

Not that I’m complaining, I play with my microwave myself. Take a CD you would like to destroy, place it on top of a coffee cup you have turned upside down and nuke it for 5 seconds. You’ll get a better show if you do this with the lights turned off. Don’t think of this as childish behavior, this is a creative process. You are either producing abstract art or Christmas tree decorations for Iron Man. 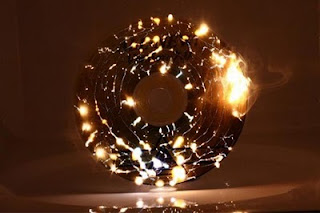 I showed one of the Munchkins at work how to do this trick, next thing I knew half the video library had been turned into wall decorations.

Actually, I have long been fascinated by microwaves. I can remember the first time I saw a microwave. Unfortunately, I didn’t know what it was.

Forty years ago, during my freshman year at college, I worked at the Shamrock Hilton in Houston. The Shamrock was a great old hotel, it was the hotel featured in the last half of the Rock Hudson movie, Giant. I had a great job; I worked the midnight shift guarding the alley. As a guard, I did such a great job that even today, 23 years after the hotel has been torn down, my alley is still there.

The hotel employed well over a thousand employees, all of us grossly underpaid. Since it was impossible to leave the hotel for lunch, and certainly none of us could afford to eat in any of the hotel restaurants, the hotel had an employee cafeteria in the basement. Every day, each employee was given $1.50 in special tokens to use in the cafeteria. Unfortunately for me, by the time the midnight shift rolled around, the cafeteria was closed, all that was left were special vending machines that only accepted the tokens.

Luckily, one of the machines sold cans of chili. I have to admit that I thought vending machines that could sell you a can of chili were pretty amazing. I had no idea such wonders of sophistication even existed, but that was nothing compared to the incredible box they had to heat up your chili.

Now cold chili is an abomination, something on a par with the weird things that Yankees do to their chili, such as adding macaroni or potato chips. Luckily, there was an oven there. The only way I knew it was an oven was the little plastic sign attached that listed the heating times for the various foods available.  Accordingly, I opened the can, put it in the microwave and turned the dial on the timer to two minutes.

A few days later, there was a replacement machine, but within about a week or two, I couldn’t get it to work either. For a while, there was a steady procession of replacements, Wolf Brand Chili and I killed each and every one of them. Eventually, someone put up a large sign, I don’t remember exactly what it said, but it was brief, profane, and educational. I reluctantly learned not to put metal in a microwave. At least not in one I needed to cook my lunch.

I’m still fascinated with microwaves. About a week ago, I was in a local convenience store late one night. Since it was late, the clerk was restocking the store. In the back of the store, on a shelf, was a microwave. Next to it was a small unopened cardboard case of 24 microwave popcorn packages. What would happen if I put the whole box into the microwave and set the timer up to about 10 minutes?

Would the whole machine explode? Would it catch fire? I’ll let you find out for yourself.
Posted by Mark Milliorn at 12:01 AM