So Many Bands, So Little Music

This is a strange time of year around the university. During the summer, the place resembles a ghost town. I miss the students, the rest of the faculty can stay away a while longer.

There are very few classes, this is a time to rewrite lectures, rebuild the computers in the lab, and read. And read. And read. I love summer reading the way a small boy loves a puppy. I guess that’s sort of obvious. This blog is a year old, and in the previous 52 entries, about every fourth one mentions a book.

The population of the town drops by thousands during the summer; many students go home, and some of the faculty go back under their rocks. Suddenly, I can drive to school without three cars behind me all trying to become my personal proctologist. In total, the town becomes peaceful and quiet.

Well, until next week. Once a year, the university turns the intramural field over to the Warped Tour. It is difficult to use peaceful and Warped Tour in the same sentence. 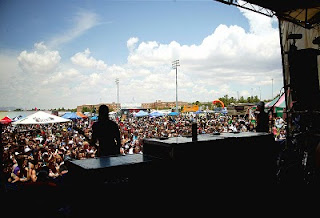 For those of you who don’t know, Warped Tour is a touring music festival. Bands play for ten hours, thirty minutes each, on ten different stages. Each band has an incredible sound system, by the end of the day; somewhere near a hundred bands will have performed. At any given moment, perhaps a half dozen are playing simultaneously.

I won’t pretend to like the music. Individually, each of the bands sound like someone is trying to break up a pillow fight in a sorority house by banging a bass drum with a cat. When several play at the same time, it sounds like freight trains having sex on Normandy beach. The level of noise causes compressions in your chest, pitiful little birds attempting to fly over the field fall from the sky stone dead, and Hugo Chavez holds a press conference proclaiming to have proof of the American secret earthquake device.

At least, this is what it sounds like to me. I should point out that my office is across the street from this sonic abattoir, I have no idea what it sounds like if you actually attend. I suspect that no one does, since if you were present, you would be deaf for the rest of your life.

I’m sure the event will be a lot of fun. Southern New Mexico in June, a field without a single tree, tickets cost $33, and you cannot bring any outside food, beverage, or water containers into the event. No doubt the concession booths will be manned by cheerful and generous people whose only concern will be to ensure the enjoyment of every person wishing to attend. They will probably give away free cotton balls so their patrons can attempt to staunch the blood pouring from their ears.

Why New Mexico in June? Do they hold a similar concert in Alaska in January? Are misery and pain part of the enjoyment? Why hold the festival when most of the students are out of town? Wouldn’t overcrowding enhance an event such as this?

Unfortunately, most of you will miss the concert. Don’t worry. Amazon sells a compilation CD for $8. Of course, to get the full effect, buy 5 copies and play all of them at the same time. Inside a phone booth.
Posted by Mark Milliorn at 12:01 AM